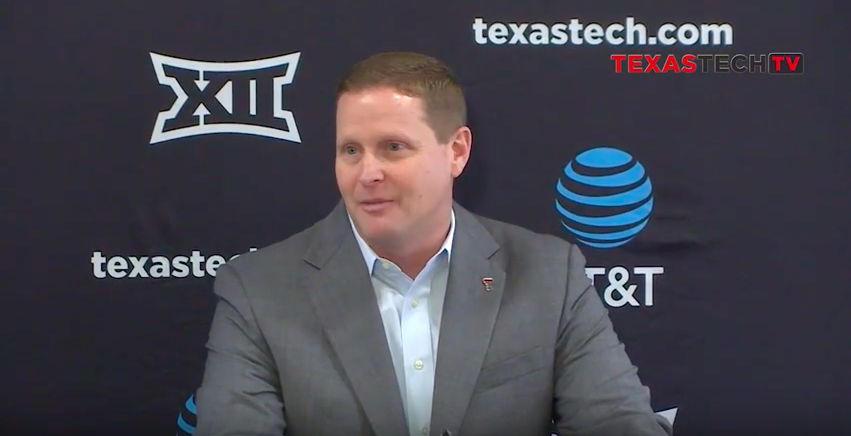 The athletic director discussed Kliff Kingsbury return, but with a greater responsibility for the defense.

Kirby Hocutt spent 50 minutes speaking to the media yesterday and confirmed that head coach Kliff Kingsbury would return to coach the 2017 season:

“I believed in Kliff Kingsbury when we hired him in December 2012, and I believe in Kliff Kingsbury today. I look forward to future success under his leadership as we move forward. I’m confident there are much better days ahead for Texas Tech football. Again, disappointed with where we are today, but optimistic about our future.”

LAJ’s Nicholas Talbot wrote that keeping Kingsbury was the right move and that the Baylor game didn’t necessarily save his job (but I’m sure it helped):

“In this position there are going to be emotional highs and lows but decisions of this magnitude are made with a wholistic view point,” Hocutt said. “It is not made with the result of one particular game … I still believe the foundation is three for our success. But, that said none of us are happy with standing here with a 5-7 season. … We don’t plan to be in this position again.”

In order to do that, change must happen — not by firing Kingsbury, but by holding Kliff accountable for the defense and Hocutt not only admitted that Sunday, he repeated it time and time again.

“There has to be changes in day-to-day operations to have (Kingsbury) more responsible for the defensive side of the ball but what those changes are, are ultimately his responsibility,” Hocutt said, adding later, “Defense? We are not very good. We are not going to achieve at the level we expect to achieve and the results we expects we have with the defensive performance we have put on the field. … You can’t allow your opponents to score 40 plus points and expect to win at a consistent level in college football.”