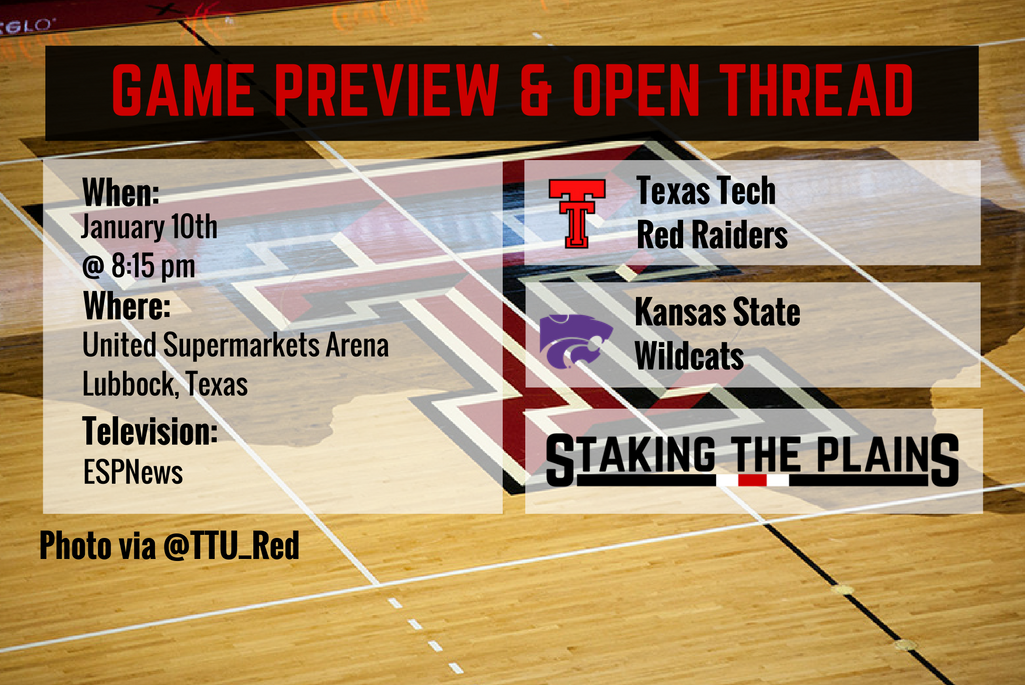 The Red Raiders host the Kansas State Wildcats in a pivotal game for both teams.

2. Kansas State really has had a resurgence this year and I wondered if Bruce Weber was really the guy that should be leading K-State last year. I don’t keep up with recruiting in basketball, so I don’t necessarily know how they’ve made such a big leap. I know that last year, K-State seemed to be playing with a short-handed deck and that hurts when you only have 13 scholarships. If anything, the Wildcats are doing this very similarly to what Texas Tech has done, which is to have a well-balanced team.

3. K-State isn’t a volume three-point shooting team and , although the main shooters are Stokes, Sneed and Brown. I think Texas Tech will have the scoring and shooting edge as well as a better ability to get the boards. Kansas State does have some length that is troublesome, but they aren’t a particularly deep team. I could envision where Temple and Odiase are better suited for this game than the Kansas game.

4. Texas Tech is favored by 4.5 points and this is the kind of game that Texas Tech needs to win, especially at home. Texas Tech cannot afford to let a team that is similar to them grab a win on the road. Ideally, I really want to see Gray be better offensively and for Anthony Livingston to be more consistent. He’s got the goods, just has to work on consistency. Evans and Smith are on hot-streaks and are playing really well, but it is the role players that need to step up their game. Hoping that Ross is getting his legs underneath him and ready to be a force, but he’ll need to improve defensively to get significant minutes.

“Kansas State is really sound defensively like all Coach Weber coached teams,” head coach Chris Beard said. “They don’t make a lot of mistakes, and it’s difficult to score on them early in possessions. We have a lot of respect for their defense, and we expect an absolute grind out type of game. We’re going to have to execute on every possession if we want to be successful.”

Coach Beard addresses the media before the #RedRaiders host #25 Kansas State on Tuesday. #WreckEm #4to1 pic.twitter.com/EdIaP6O91i