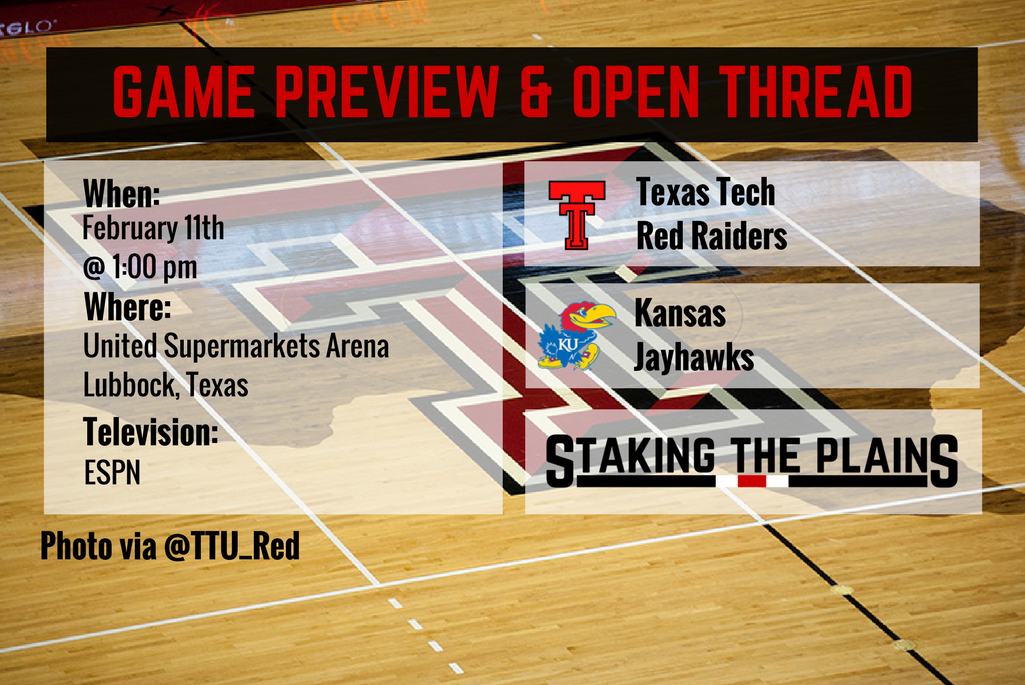 The Red Raiders look to upset the #3 team in the nation in the Kansas Jayhawks.

1. KenPom is the 9th ranked team overall, 5th in AdjO and 36th in AdjD. Still weird to see those numbers for KU in that they normally have a higher rated defense than offense, not that 36th in AdjD is terrible or anything. Texas Tech is holding steady at 41st overall, 42nd in AdjO and 63rd in AdjD. I think at this point, Texas Tech are what they are.

2. This is a tough match-up for Texas Tech. Mason is quietly playing as well as any player that I can remember for Kansas. He scores and he passes the ball and he’s ridiculously efficient. Add in Jackson and Graham and you’ve just got this legal guard combination and that’s why they’re so good. The frontcourt, for what seems like ages, isn’t anything to write home about, but the guards are fantastic.

3. One of the best things that I’ve seen this year has been the improved play of Keenan Evans. He’s going to be an all-conference performer next year for sure and he should get some post-season accolades for his play this year. He’s morphed his game and been fantstic.

Don’t let his silence trick you, Keenan Evans is making moves for our Red Raiders. Catch him in action tomorrow against #KU #WreckEm #4to1 pic.twitter.com/UAHqZ8Az43

4. Chris Beard talked during his press conference how the team is significantly better when the team gets to the free throw line and I couldn’t agree more. Before I even heard him say it, I thought that this would be the key to the game, getting to the line more than Kansas. Points when the clock is stopped. Sometimes upsets are created with three-point shots, but this team is probably built better to upset with free throws more than anything else.

5. Head coach Chris Beard discusses the need to win this game (and every game):

“Me personally every game I’ve ever coached has been a must win,” Texas Tech head coach Chris Beard said. “You put a lot of time, a lot of preparation in and the objective is to win. We go one game at a time. We have a lot of basketball left, but that’s the way I address every game. I think some of our players are starting to share that view. It’s the Big 12, it’s February and we have to find a way to win at home if we’re going to put ourselves in a position to do something special here during the last month of the season.”