Let’s talk about the stats between Arizona State and Texas Tech. 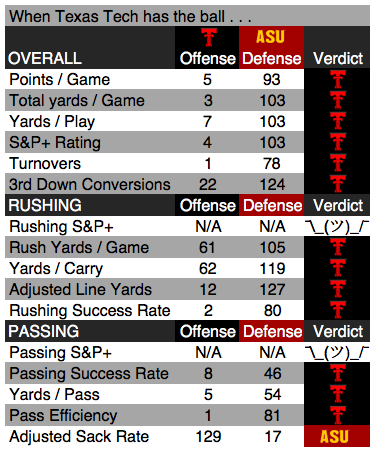 I would like to admit that when I was compiling these stats, i started to get cross-eyed so they may not be totally correct. I tried my best with the limited time that I had. I also realize how difficult these were to put together just because I take them from so many sources.

The second caveat is that these are very limited stats. Very limited. It’s incredibly difficult to take much of anything from these stats, so don’t let them affect you much, if any at all. If anything, with two games under Arizona State’s belt, you can probably think that their stats are a bit  more meaningful.

With that being said, the Texas Tech offense has started out on the right foot, having a pretty impressive offense overall. The running game is middle of the road, which I’m totally fine with and the passing offense appears to be okay. Again, don’t read much into things just yet.

With the Arizona State defense, they obviously struggling a bit, they gave up a ton of rushing yards last week and then ended up giving up a ton of passing yards the week before.  They haven’t consistently stopped much of anything and that’s usually the sign of a not so good defense.  I think we as fans should know that last sentiment, which is be good at something, anything, but particularly be good stopping the run.

When Arizona State Has the Ball 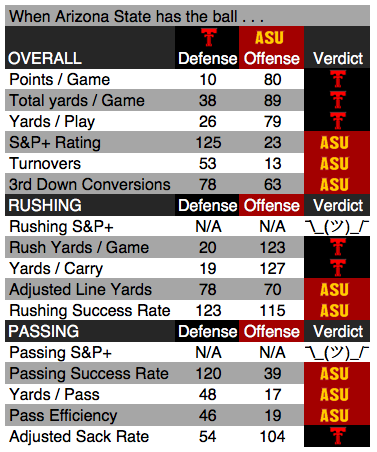 Things get a bit more even in this game. I don’t think the Arizona State offense has really been the problem. The stats don’t show it in terms of overall offense, but in terms of passing the ball, Arizona State has been really pretty good. Very efficient and I think that’s the key for things for the Texas Tech defense, which is to guard agains the big play because Arizona State can throw it and the safeties will maybe be one of the positions that will play a big part in the win.

The Arizona State rushing offense has been anything but what they were last year. I tend to think that Texas Tech was the one that solved problems like that last year, but they’ve got a real opportunity to prove something here.

I should also mention that a lot of the numbers are based off of figures from last year, which is why the S&P+ rating looks wonky, which is that it takes some time for those figures to get worked out of the system. It’s part of the reason Bill Connelly’s numbers don’t look like all of the others, which is that part of history of the Texas Tech defense has been terrible and that factors into those figures.