Let’s dive into some stats between Texas Tech and Kansas. 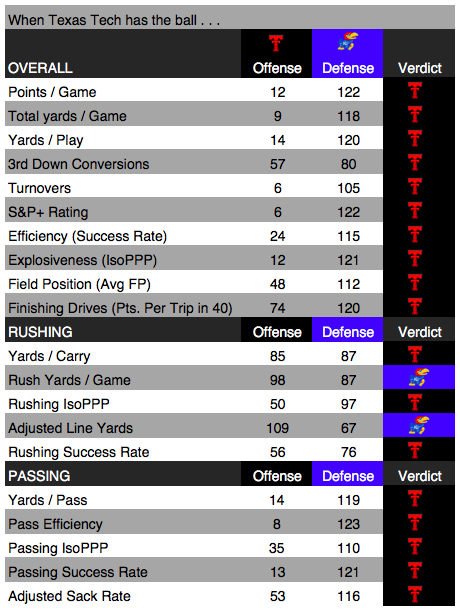 Well, it’s pretty clear that Texas Tech has the offensive advantage here in nearly every category except for a few rushing categories, where Texas Tech just hasn’t hit the mark in terms of being able to run the ball effectively. There are a couple of areas of concern for Texas Tech, namely that Texas Tech isn’t completing a high percentage of 3rd downs, which I think means that they need to do a better job on 1st and 2nd down to make those 3rd downs more manageable.

The other item of concern is finishing drives and as you’ll note, isn’t crazy successful in terms of finishing drives inside their opponent’s 40 yard line. Seems like this team has had to settle for field goals way too often.

The running game somewhat speaks for itself in that it’s not great, not great at all. The IsoPPP is pretty good, but that’s big plays and they have hit on those, but the running game needs to ground out more yards.

As far as the passing stats are concerned, despite the “off” game against Oklahoma State, I think everything will be fine there.

When Kansas Has the Ball 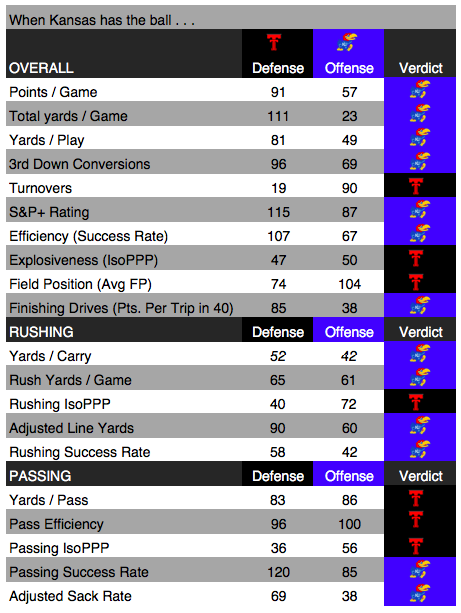 This may surprise you, but Kansas can move the ball. They don’t score as well as they should in terms of overall yardage, but they can move the ball up and down the field at a pretty decent clip. Maybe this will be a game where Kansas just nickel and dime’s Texas Tech as much as possible. Texas Tech doesn’t give up huge plays on offense and maybe this is a time where Texas Tech tries to force Kansas to do something different and make those big plays. Take away the short stuff.

Kansas’ biggest advantage is running the ball and they really are quite good at it. Texas Tech isn’t bad in the traditional sense and even on some of those advanced stats. They haven’t really had an opposing running back break off a huge gain running the ball.

In terms of passing the ball, Texas Tech has more items in their favor than I would have expected. Some of those statistical wins aren’t by much, so it would be fair to say that for the most part, the Kansas passing game is pretty evenly matched with what Texas Tech has been able to stop defensively.