A deep dive into the stats for the Oklahoma Sooners and Texas Tech Red Raiders. 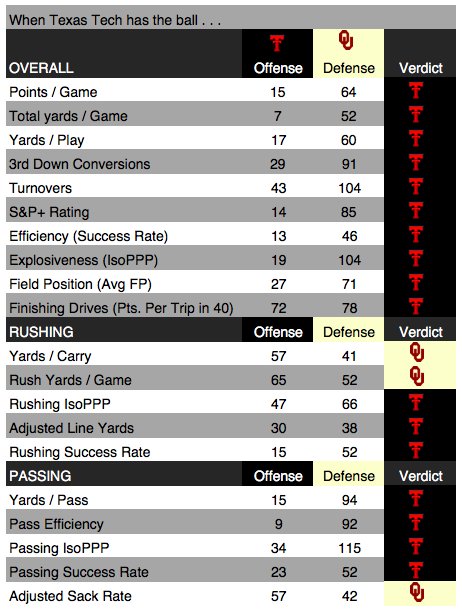 Again, all stats are courtesy of Football Study Hall and CFB Stats, please give them a click because without them, this isn’t remotely possible.

On paper, this is a situation where Texas Tech *should* be able to do some things. They should have been able to do things last week as well, but that never materialized. Oklahoma has an okay defense, not terrible, but not great. their front four is absolutely fantastic and the linebackers do a good job of cleaning things up and making it tough for teams to run.

Where the OU defense really struggles is in the passing game, where teams can go deep on the Sooners. Iowa State had some decent success against Oklahoma, but the Texas Tech offense has struggled for a handful of quarters offensively without really any real consistent threat of scoring has been very tough to stomach.

As an aside, Texas Tech dropped from something like 4th in points per game to 15th after last week’s performance. The running game is respectable for Texas Tech, not great, but very respectable and I’d expect a heavy dose of Tre King this week. The thing to watch against Shimonek is Oklahoma’s defensive line, which will get to the quarterback and they’ll hit the heck out of you too. When that pressure happens, what is Shimonek going to do, step up or start getting lateral.

When Oklahoma Has the Ball 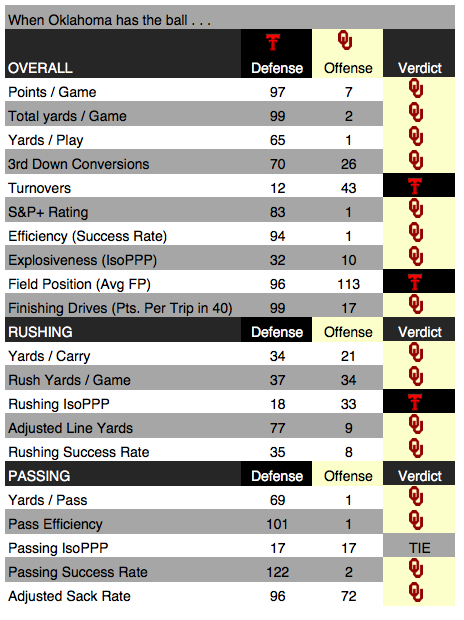 Oklahoma has the best and most efficient offense in the nation. Let that sink in for a second. Despite their recent struggles offensively, where the Sooners have gone into lulls, this is merely a bump in the road because they still have the best offense in the country. I mentioned it on Monday, but the offense is wholly driven by Baker Mayfield. Without him, this offense would be a disaster most likely (if he were to get a stomach bug on Saturday, this would be fine, just fine).

The Oklahoma running game has been top 30 for the most part, but hasn’t busted out, while Texas Tech’s rush defense continues to be able to hold opponents below what they’ve done previously. And OU is sorta warming up in terms of the running game, so it will be interesting to see if one side gives in.

Still, what you’ll be watching on Saturday is most likely the best offense you’ll see this year.