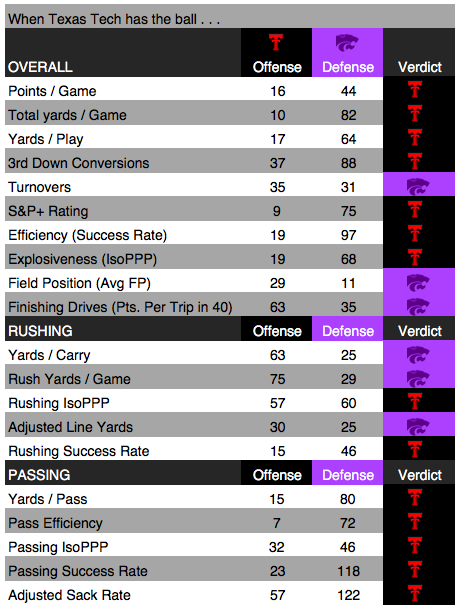 As always, the stats are thanks to Football Study Hall and CFBStats.

In this morning’s Stake, we read about the bend-but-don’t-break defense for Kansas State and that’s where they have a pretty decent advantage at stopping opponents from finishing drives. And I don’t remember a lot of other situations where a team has had an advantage at turnovers.

What Kansas State obviously does very well is stop the run and I’d imagine that the Wildcats can choose to do that, but the pass defense has been pretty terrible. In addition to simply not being able to defend the pass, they also cannot get to the quarterback, so that’s a terrible combination. The Wildcats were blessed last year with some real pass rushers, but that doesn’t appear to be the case.

The obvious prediction is that Texas Tech won’t have a ton of rushing yards, but the Red Raiders should have an obvious advantage passing the ball and Shimonek should have plenty of time to get that done.

Oh, and that third down conversion rate is something to watch. On both ends of the ball, Texas Tech holds a pretty significant advantage in terms of converting third downs or stopping third downs. That’s a big deal.

When Kansas State Has The Ball 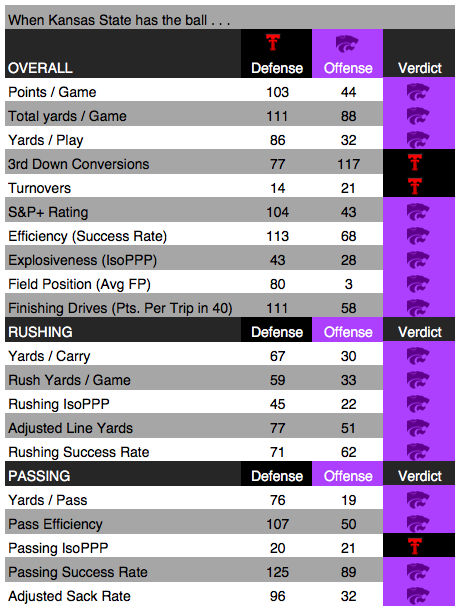 The Texas Tech defense is improved, but is sliding back still and that’s okay. Texas Tech shows up better on some of the traditional stats more so than the advanced stats.

The stats say that Kansas State is really good at running the ball while Texas Tech is just a notch below the Wildcats. Even after being blown off the ball against Oklahoma, Texas Tech doesn’t have terrible numbers in terms of running the ball. Those are stats that you can deal with and as terrible as the run defense looked against Oklahoma, keep in mind that the OU offensive line is really big and talented.

Texas Tech really hasn’t stopped a passing game, maybe except for Kansas, but this is the one area where Texas Tech has pretty much struggled, struggling so much that K-State, which is not a passing team, wins on all of these stats.

The one area that may hopefully give you all some comfort is that third down conversion rate for the Kansas State offense, 117th in the nation in converting third downs. That’s pretty shocking.