A statistical preview of Texas tech vs. Texas. 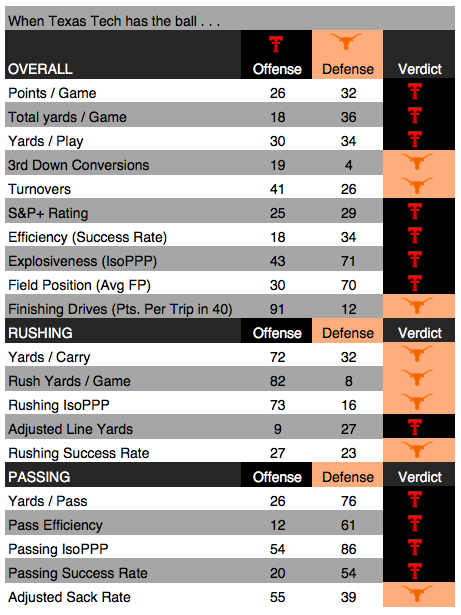 A last thanks to Football Study Hall and CFBStats for the stats each and every year. These sites are indispensable for the game that we love and for me to be able to write about the things that I love.

The offense looks okay here, Texas obviously has a really tough rushing defense and that could be problematic. The other thing to be concerned about is that lights-out third down conversion percentage by the defense and the fact that they’ve gained so many turnovers.

The ability to flip the field for Texas has been really important in them winning 6 games. In fact, Texas’ rush defense is downright terrific and dominating. This part obviously concerns me greatly.

The passing offense is okay, although the adjusted sack rate indicates that Texas is really good at getting to the quarterback. When given the opportunity to pass, at the very least, Texas Tech should be able to move the ball. Putting that ball in the endzone is the problem.

Texas Tech’s rush offense is still okay given the passing offense, but the Red Raiders really haven’t been able to put both pieces together to create a really terrific offense. 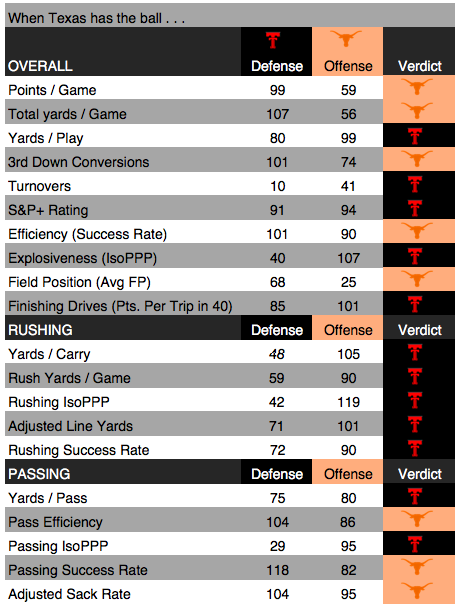 You know, this is a lot better news than I would have originally thought. I knew the Texas offense has struggled, but I really didn’t realize that it was to this extent. I do think there’s something to be said for who is at quarterback, the offense is probably better under Ehlinger because of his ability to be versatile and run the ball as well as get the ball down the field.

I think Texas Tech will get enough stops against Texas to give the offense a chance, there’s just too many signs pointing that way.

The Texas Tech defense is, at least on paper, signifcantly better than the Texas offense, but again, I think there’s a difference between Ehlinger and Buechele. Still though, I think the fact that Texas plays so many guys might mean that they don’t have “a guy”. Still, I think the rush defense will be able to stop Texas at times.

The pass defense continues to be the one part of the Texas Tech defense that doesn’t play well. Even against Texas.