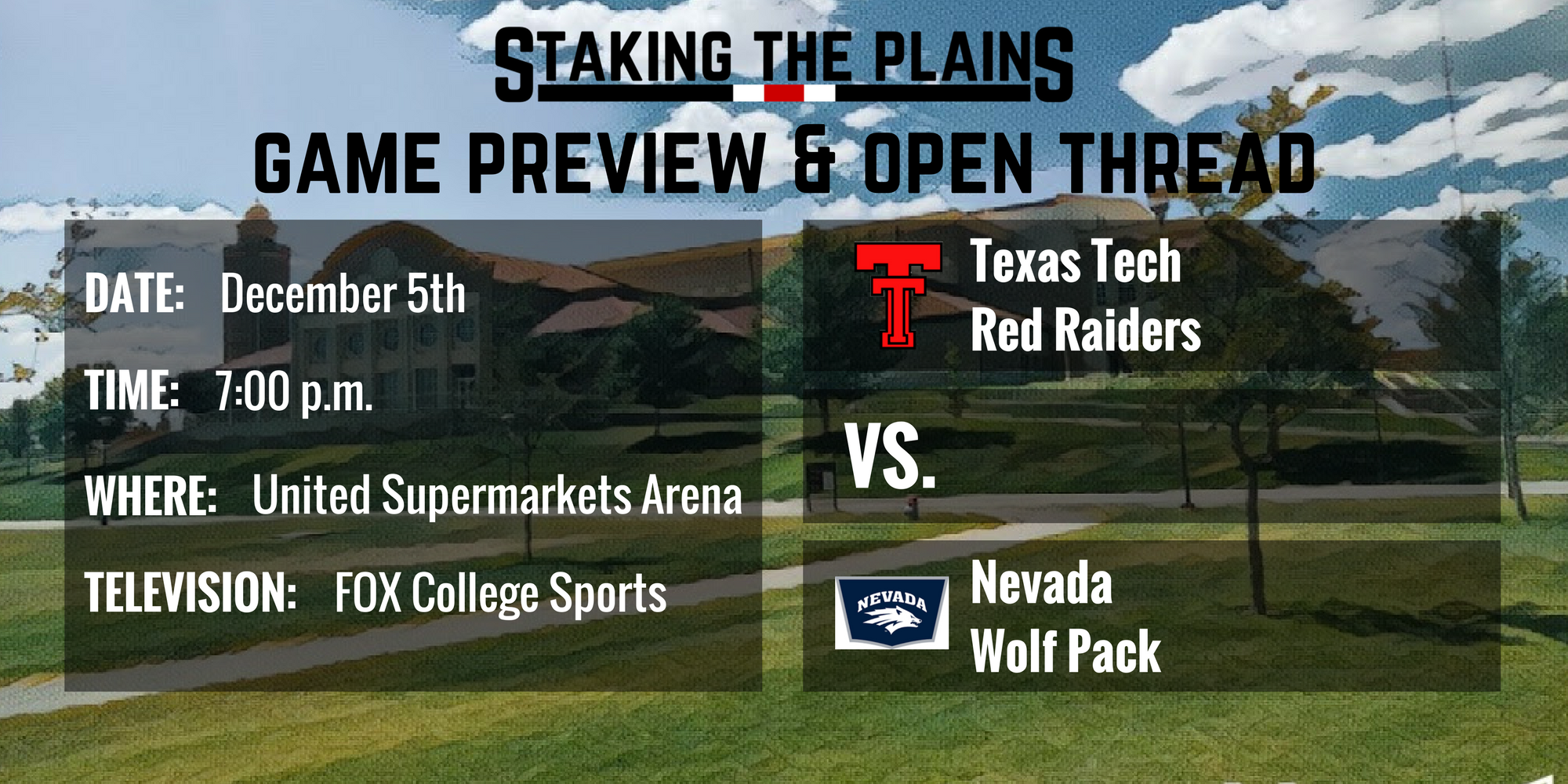 The Red Raiders face a top 25 team at home.

2. Nevada is undefeated and has played really well thus far this year. They have wins over Rhode Island and Hawaii, which are probably their best wins of the year. They have 4 road wins, which is the most in college basketball. They’re not a big team, which somewhat plays into what Texas Tech likes to do. Their best players are what I presume are twins, Cody and Caleb, and they do a ton of the heavy lifting for the Wolf Pack. Nevada also shoots very well, nearly 50% from the field and 43% from the three-point line and it’s Caleb that’s doing a ton of the damage, making half of this three-point shots.

3. That was maybe the biggest problem against Seton Hall, which was that this team simply couldn’t get out on the Pirate offensive players. Plus, they were just really good offensively. This will really be a battle of what looks to be a really good Nevada offense against what had been a top ten defense. The Seton Hall game somewhat changed that. We’re about to see how good of a defender guys like Francis, Gray, Zhaire and Culver are because Caleb can play and Texas Tech will need to be out on him as well as Stephens and Hall. They’ll shoot the three as well, they’re just not as efficient.

4. The official site has your official preview, this is from head coach Chris Beard:

“Big game for us on Tuesday,” Texas Tech head coach Chris Beard said. “It’s the next game on the schedule but also against a quality opponent that we have nothing but respect for. They’re very well coached, and they have great players. Nevada basketball has a plan. They’ve got a blueprint. They take high quality transfers from around the country combined with really good high school and junior college recruiting and a great coaching staff. There is a reason why they are one of the only undefeated teams left in basketball. There is a reason why their team is ranked in the top 25. There is a reason why they have already got four road wins. It’s a great opportunity for our guys to play against a quality opponent, somebody we fully expect to be in the NCAA tournament here in a few months.”

5. From the media, A-J Media’s Carlos Silva, Jr. and from the Reno Gazette Journal’s Chris Murray, they both preview tonight’s game. Here’s a prediction from Murray:

Texas Tech 79, Nevada 73: If this game was played on a neutral court with both teams having an equal amount of rest, I’d pick Nevada. But, it’s not. The game will be in Lubbock with the Wolf Pack coming off a series of road games and looking a step slow last time out. I’d give Nevada a 40 percent shot of winning this one, but the Wolf Pack will have to play better in this game than it has in its last two road contests – by a solid margin. That’s clearly possible. Nevada’s 3-point shooting makes it really dangerous in any game. Texas Tech, meanwhile, doesn’t have many holes. Ken Pomeroy’s advanced metrics rate the Red Raiders as the nation’s 13th-best defense and 30th-best offense. Texas Tech also is plus-six boards per game on the glass and is especially good at grabbing offensive rebounds, which could be an issue for the smaller Wolf Pack. Texas Tech is a deep team – nobody plays more than 25 minutes per game – and should be able to navigate foul trouble if it crops up, too. The Red Raiders’ schedule has been fairly soft with only one game against a top-100 RPI opponent (a contest Texas Tech lost), so I could be overrating them, but I’ll take the home team in a close one. Season record: 7-1

Finally, if you’re into hypothetical gambling, via OddsShark, Vegas has Texas Tech as a 5 point favorite.