I prepare for bowl season the only way I know how: talking with folks about where y’all should eat.

Texas Tech will face USF in the Birmingham Bowl on December 23rd which means quite a few Red Raiders will be finding themselves in Alabama’s largest city. Luckily, Erin Shaw Street with What To Eat in Birmingham has agreed to give us a local’s insight on what Birmingham has to offer.

Let’s jump right in. Kickoff is at 11am Saturday morning at Legion Field. What are some recommended places around the stadium that fans could visit before and after the game?

Legion Field is about two miles from downtown proper. Fans would be smart to check out The Pizitz Food Hall either before or after. Located in an iconic former department store, it showcases incredibly diverse foods. I’d recommend grabbing breakfast from The Alabama Biscuit at Pizitz Food Hall. The Goat Cheese, Pecan & Honey is my favorite thing to order. Just a short walk down the road, another breakfast option is Urban Standard — the stone grits are from McEwen & Sons in Wilsonville, Alabama. Grab a coffee and people watch — it’s a perfect glimpse into downtown Birmingham.

For lunch I’d recommend heading back to Pizitz for a Super Crunch bowl at Ono Poke, or trying one of the 12 other food stalls or two sit down restaurants (Fero features Italian and Ghion Cultural Hall is an Ethiopian restaurant. Both are great.)

Craft beer is delicious. Does Birmingham have any breweries or tap rooms where fellow beer loves would feel at home?

Yes, we have a number of options. Good People Brewing has a large tasting room right across from Regions Field (where the Birmingham Barons Play). Bonus: go for a walk across the street at Railroad Park, our 19-acre urban park. Avondale Brewing Company helped lead a revitalization of the now thriving Avondale area — there are several bars and restaurants in this district now. The J. Clyde, located in the Five Points area, has an extensive beer list, and is a good way to taste a number of Alabama beers in one place. (One note: I don’t drink, but all of these come highly recommended from trusted sources.)

We joked via email about disagreeing a bit on BBQ, but I firmly believe that eating what the locals eat is the best way to experience a new place. What are some of the best BBQ joints in town?

Well, just like Texans, we’re serious about our barbecue. I believe that there’s room for all kinds of barbecue. And of course it depends on exactly what kind of barbecue you want. I recommend Saw’s Barbecue. My favorite is their pulled chicken sandwich with white barbecue sauce (mayo based), with a side of collards and an order of deviled eggs. Heaven on earth. (They also make a mean red sauce.) You can never go wrong with Jim N Nicks. Think: classic spare ribs, baby back ribs, pulled pork and chicken plates with all the trimmings. Oh, and their cheese biscuits are melt in your mouth.

Speaking of local fare, what can you get in Birmingham that would be hard to find elsewhere?

We have many locally run, independent restaurants. For one, Johnny’s in Homewood (a quick drive from downtown) merges traditional Greek food with the South’s meat and three culture. Owner Timothy Hontzas is a semifinalist for Best Chef: South in the James Beard Awards. (Think: Greek Meatballs served with Turnip Greens, Parmesan Grit Cake and Fried Green Tomatoes.) Speaking of award winning chefs, Birmingham is home to two of the most well respected names in the culinary world: Chef Frank Stitt, owner of the upscale Highlands Bar & Grill, French-inspired Chez Fon Fon and Italian inspired Bottega (which has a cafe and a more formal dining option). Chef Chris Hastings owns Hot & Hot and Ovenbird. (Check their sites for reservations, though you can usually slide up to the bar for an appetizer at most of them.)

Please, tell me more about rolled ice cream. This beautiful creation has not made it to West Texas.

Rolled ice cream is fun and catching on around the U.S. Originating in Thailand, it’s made by pouring a mixture that freezes when it hits a frozen stainless steel surface. Using a spatula, the ice cream maker shape the substance into rolls, mixing in toppings along the way. It’s as much as about the experience of watching it being made as it is eating it. There’s a spot in the Birmingham suburb of Pelham called Cream and Cones Ice Cream Lounge, with others slated to open. I predict West Texas will have a rolled ice cream shop soon!

Browsing your site, one can quickly see that there is a great scene for ethnic food. What are some of your favorites?

Where to even begin? I’ve mentioned several already. Other favorites include Silver Coin (Indian), and Blue Pacific (Thai food served in a former gas station). Both are located in Hoover, a Birmingham suburb. Closer to downtown, Greensprings Highway is home to many wonderful restaurants. Among my favorites: Pho Que Huong Vietnamese Restaurant and Red Sea Ethiopian and Mediterranean. For Mexican, Los Dos Hermanos Truck is the real deal. Also, my co editors (Mr. and Mrs. Foodie) recommend El Girasol in East Lake; if you go on a Saturday, you will see them grilling whole chickens in kettles outside. Comes with fresh, warm tortillas.

Are there any tourist attractions or other sites in the area that would be good stops this weekend?

Absolutely. Birmingham’s Civil Rights Institute is closed the holiday weekend, but you can drive by the 16th Street Baptist Church, across the street — a vital landmark in our city’s history. The Birmingham Negro Southern League Museum provides an incredible look at the city’s history and the contribution to baseball coming from players right here in Alabama. (In fact, former players volunteer there, and if you’re lucky, you might get to chat with one.) One MUST pay a visit to our most famous resident: Vulcan. The second largest cast iron statue in the country after Lady Liberty, he was built in 1904 as an homage to our city’s steel roots. Take a ride to the top and get the best views of the city, plus check out the excellent museum.

The Birmingham Zoo and Birmingham Botanical Gardens are right next to each other and a lot of fun. And about 20 minutes from downtown sits the world’s largest collection of motorcycles: Barber Motorsports Museum.

And, finally, what is it you love about Birmingham? What makes this city special to you?

I came to Birmingham in 1998 for what I thought would be a short visit … and nearly 20 years later here I am! This city has a way of doing that: fair warning to our visitors. Birmingham has a robust and diverse cultural community. With the influence of our universities and medical community in particular, we are shaped by people who are rooted elsewhere but make this their home.

The people are welcoming, and one can really access and enjoy all of its neighborhoods. It’s easy to navigate and still the kind of city where one can make his or her mark. Also: we have pretty delicious food, if I haven’t mentioned that. 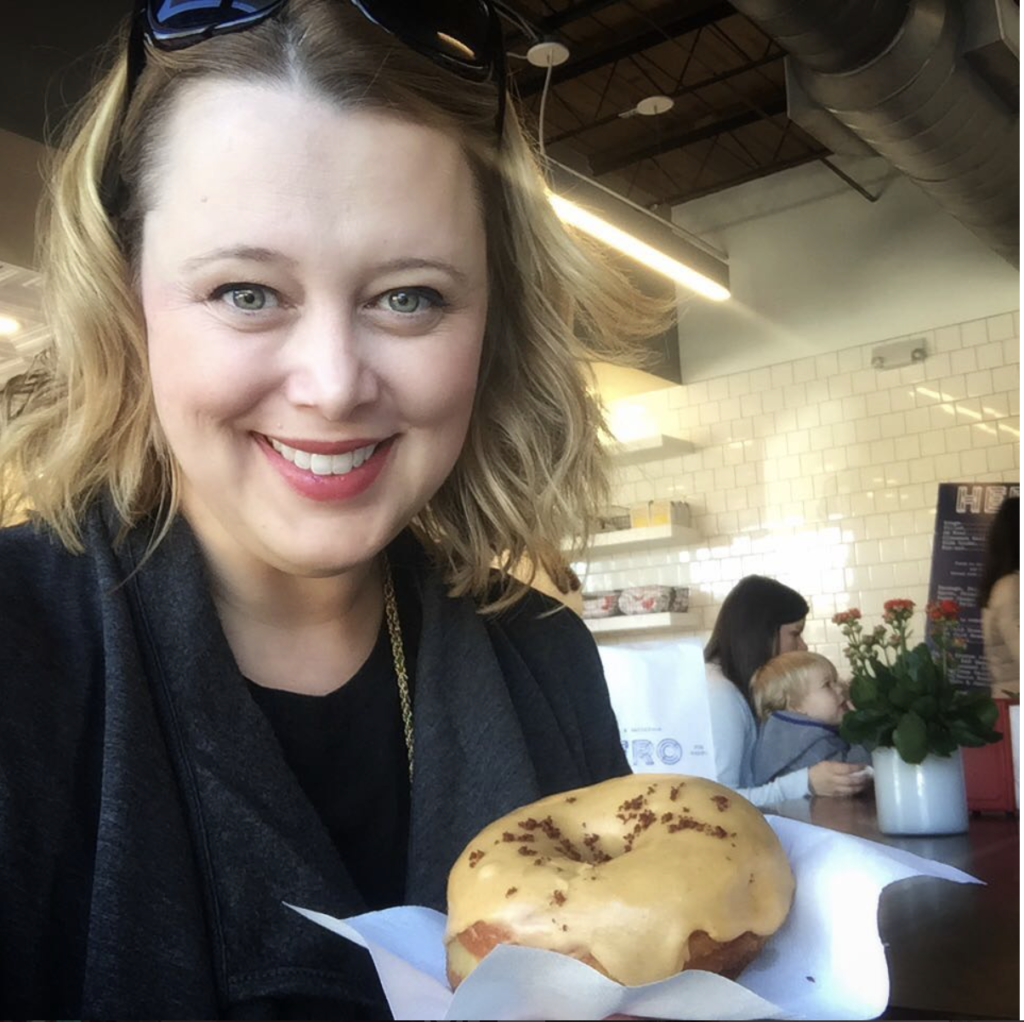 Erin enjoying a delicious sampling from Hero Doughnuts in Homewood

Thanks so much to Erin for taking the time to do this! Please visit her website and give her a follow on Twitter (@erinshawstreet & @WhatToEatInBham) and Facebook. If anyone needs me, I’ll be over here trying to figure out how to make a pulled chicken sandwich with white sauce, greens, and deviled eggs. My goodness.