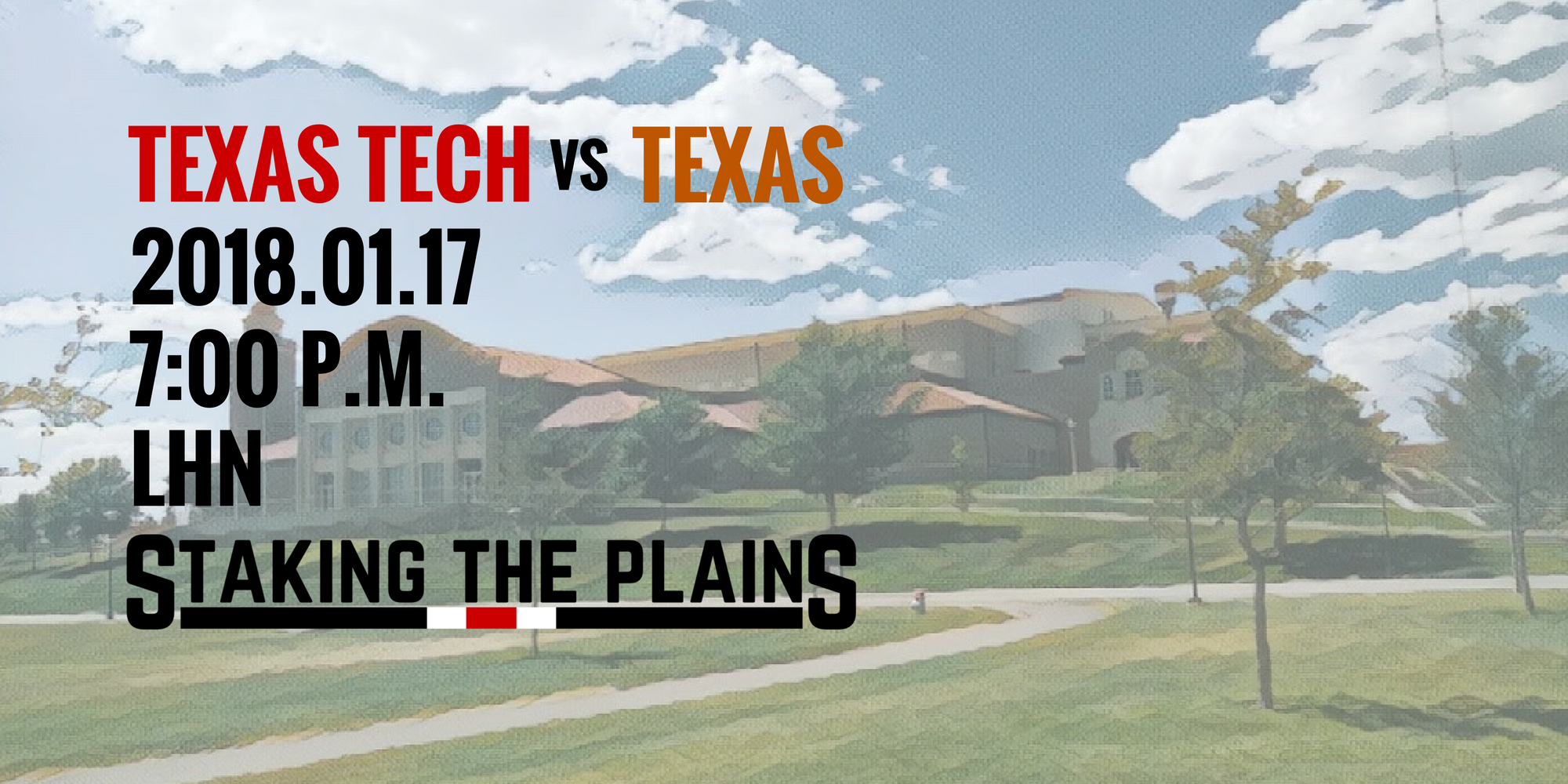 The Red Raiders are in Austin taking on the Longhorns.

2. Stats. In looking at the four factors, Texas Tech pretty much has statistical advantages in all four categories, which is a bit odd. Texas Tech is a better shooting team, eFG% of 54% for Texas Tech to just 50% for Kansas. Texas Tech grabs nearly 4 more offensive rebounds than Texas, which is odd considering that Texas is a huge team, 3 starters all 6’9″ or higher. The Red Raiders have a higher free throw rate, 28% to 22% and both teams are about the same in turnover percentage. A lot like Texas TEch, Texas shines on the defensive end, allowing opponents to shoot just 39% from the floor and the Red Raiders allow 37%. One other statistical note is that Texas is a pretty terrible three-point shooting team, making only 30% of their three-point shots.

3. Scouting. I had to officially make the move to pull Zach Smith from the starting lineup after it was announced that he would be out indefinitely with a broken foot. I’m guessing that Zhaire gets the call going forward and he should. He plays much bigger than his 6’5″ frame and can do some things defensively that no one on the roster can do. I mentioned after the game that with the addition of Smith, this gives Chris Beard a very Kansas-like roster. A bunch of athletic guys on the perimeter that can switch and play with anyone and a big man to handle what happens in the middle. I can’t imagine that stays the same for the Texas game. Sims doesn’t get a ton of playing time and generally, Texas runs a 3-guard lineup, but the Longhorns are big aand

4. Reading Material. A-J Media’s Carlos Silva, Jr. previews the game and writes that the Red Raiders are looking to end their 21-game losing streak in Austin:

“He’s a great shot blocker,” Texas Tech’s Norense Odiase said of Bamba. “He does a great job of protecting the rim, protecting the paint for his team. He’s a good player and we’re up for the challenge for him.”

Bamba leads the conference in rebounds and blocked shots (4.4 per game), while freshman Matt Coleman has been developing into a point guard.

“You look at their three interior players, those three bigs, they’re all pros,” Beard said. “They’re all guys that are getting better as the season goes along. I think their point guard, Coleman, he’s playing a lot more aggressive since Andrew’s been out. He’s one of the better players in the Big 12. I think he’s gonna be, when it’s all said and done, he’s going be one of the best guards Texas has ever had.”

The eighth-ranked Red Raiders (15-2, 4-1 Big 12) come charging into the Erwin Center on Wednesday looking to keep it rolling against the Longhorns. It’s been years since Texas (11-6, 2-3) faced a Tech team this dangerous and diverse.

“He’s got them really bought into playing as a team,” UT coach Shaka Smart said. “If you look at their statistics, I believe they have only (three) guys in double figures scoring wise. But they’ve got a lot of really good players who have bought in right now who have scored five, six, seven, eight points (per game).”

The Longhorns continue to be without Kerwin Roach Jr., who is likely to miss the next two games with his fractured left hand injury. Tech got some bad news, too, when it was learned Zach Smith (6.5 points) is out for the year with a broken foot.

“Big week ahead for our team with two road games in the Big 12 starting with Texas, a team we have a lot of respect for,” Texas Tech head coach Chris Beard said. “Shaka Smart is one of the best coaches in the country, and Texas has really good players. It’s a program that has been in our thoughts and prayers as a team because of what’s going on with Andrew Jones and his fight against this disease. I have a lot of respect for Andrew. We have the same hometown in common, Irving, Texas. I saw him play a lot on the circuit. Shaka has told me what a great player, and more importantly a great person he is. We continue to pray for him, his family and the Texas program. We look forward to Wednesday night and the chance to compete with a great team.”