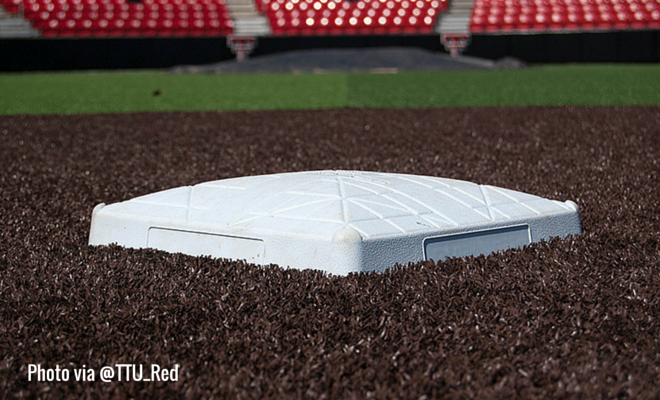 For this baseball preview, we analyze each infield position and who may see playing time and eventually start there by the end of the season.

Last week we took a look at the schedule for the baseball team. This week we will evaluate the infield, and who we are likely to see play at each position. Here is the preview schedule if you need it:

Now on to the infield. Let’s start off with third baseman, since that position is probably the easiest to analyze out of the group.

Last Year: Josh Jung started from the get go and is the only returning player who started every game for the Red Raiders last season. The sophomore started at the seventh spot in the order, but quickly was able to move to the three hole quickly. The San Antonio MacArthur product posted great numbers, as evident with the stats above. He also was a great fielder with .979 fielding percentage and a rocket arm. Jung earned Big 12 newcomer of the year honors and was selected to the All Big-12 second team, and rightfully so.

My Prediction: Josh Jung starts every game at third, minus possible days off or injuries.

This Year: I think it’s pretty safe to say that Jung will be the everyday third baseman, much like last year. Michael Berglund and Kurt Wilson played some third base in the Red and Black Series, but basically it was because you can’t play with one third baseman and you need a back-up plan just in case. I bet Wilson will take a majority of garbage time at third, with Wilson coming in for garbage time and in case anything happens. Berglund was my guess for an injury replacement, but since he announced he’s transferring on Sunday, Wilson becomes the main replacement I believe.

Last Year: Orlando Garcia occupied this position last year and did well, once again. He batted over .300 with 13 HRs and 62 RBIs, and had a .969 fielding percentage, which was good enough to get him drafted and leave Texas Tech to play professionally. However, with Garcia going pro, there is a void at this position. Michael Davis started three games at shortstop last year to give Garcia rest, but no other player has experience at that position.

My Prediction: Grant Little and Michael Davis both see time early on, with Grant Little taking over the shortstop position.

This Year: Tadlock has a choice to make. Michael Davis is a senior and has experience. Grant Little’s position in high school was shortstop, and the coaching staff may want to move him into that role with Garcia no longer blocking him from doing so. Little has a lot of speed and looked impressive defensively during the Red and Black series. The Big 12 All-Freshman team selection should once again be an on base machine for the Red Raiders and will use his bat and speed to move into scoring position early and often.

Last Year: Yes it’s the same table as shortstop, but the players are the same. And I’m a little lazy. Mainly two players were at second base last season. It started with Michael Davis, who had some huge at-bats early on in the season. Then, Davis took a leave of absence and Brian Klein started at second base for the rest of the season. Klein’s best moment came against TCU, when he had a three run go ahead homer in the series that earned him Big 12 freshman of the week. Tanner Gardner even started a game or two at second base when he wasn’t at DH.

My Prediction: We’ll see a combination of Michael Davis, Brian Klein and Gabe Holt, with Michael Davis eventually starting at second base.

This Year: No, I didn’t forget about Michael Davis when I didn’t start him at shortstop. I think he’ll eventually be the second baseman. He’s played there a majority of his career, and although I think he makes some great plays, I don’t think he’s the best defensive player. However, I’ll fully admit that there’s a good chance I’m wrong. There’s many ways the middle infield positions could go. We could see Davis at SS, Klein at 2B and Little at LF, or maybe it’s Little at SS, Davis at 2B and possibly Holt in LF. Maybe it’s neither. There’s way too much depth at this position to be able to confidently predict what will happen (unless you’re close to the team). Either way, I believe we will see at least three of these players starting a majority of the time.

Last Year: For the second year in a row, the first baseman for Texas Tech earned Big 12 player of the year honors. In 2016, it was the legend Eric Gutierrez. Last year, it was Hunter Hargrove. The former outfielder and third baseman batted .343 with 51 RBIs and 56 runs with a fielding percentage of .994. Well now he’s graduated, and after having the position locked up for four years, Tadlock is looking for a replacement for the second straight season.

This Year: You may look at Warren’s stats from last season and wonder why I’m ultimately picking him for the spot. Well, we know Tadlock started the newcomer Warren as a leadoff hitter in the opening series, which meant that he had high expectations for him. Obviously his season didn’t go as planned, but he kept on trying to plug him in late situations last season. I talked to Tadlock after Texas Tech loss to UTA, and it was evident that he had high hopes for Reams and Warren, but things didn’t go as planned. People have bad seasons in baseball, and I think the junior will turn it around this season and earn the first baseman job.

Last Year: There was a rotation at catcher a season ago, as there usually is at that position. Different catchers work better with different pitchers, and you don’t want to wear a catcher down from playing him everyday. Michael Berglund got a majority of the starts, with Clay Koelzer and Kholeton Sanchez also getting a few starts. Both freshman catchers saw time in the postseason, and Berglund was named to the All Big-12 freshman team.

My Prediction: All catchers will get time during the season. Will have a rotation of Willems and Koelzer come postseason play.

This Year: There was a shocking announcement on Sunday when Berglund transferred out of the Texas Tech. As Seth mentioned on the morning stake on Monday, Tadlock had said that Berglund was the favorite the be named the starting catcher. Luckily for Texas Tech, catcher is one of their deepest positions with Koelzer returning, and Willems and Fulford arriving on campus. I bet Willems will be the main starter for Tech this season, with Koelzer playing a similar role as he did last season. Williems displayed a good bat during the Red and Black series, and Koelzer was solid for the Red Raiders in 2017. Fulford should also get a few looks at catcher this season to give those guys a break.

We’ll do a review of the outfield next week.