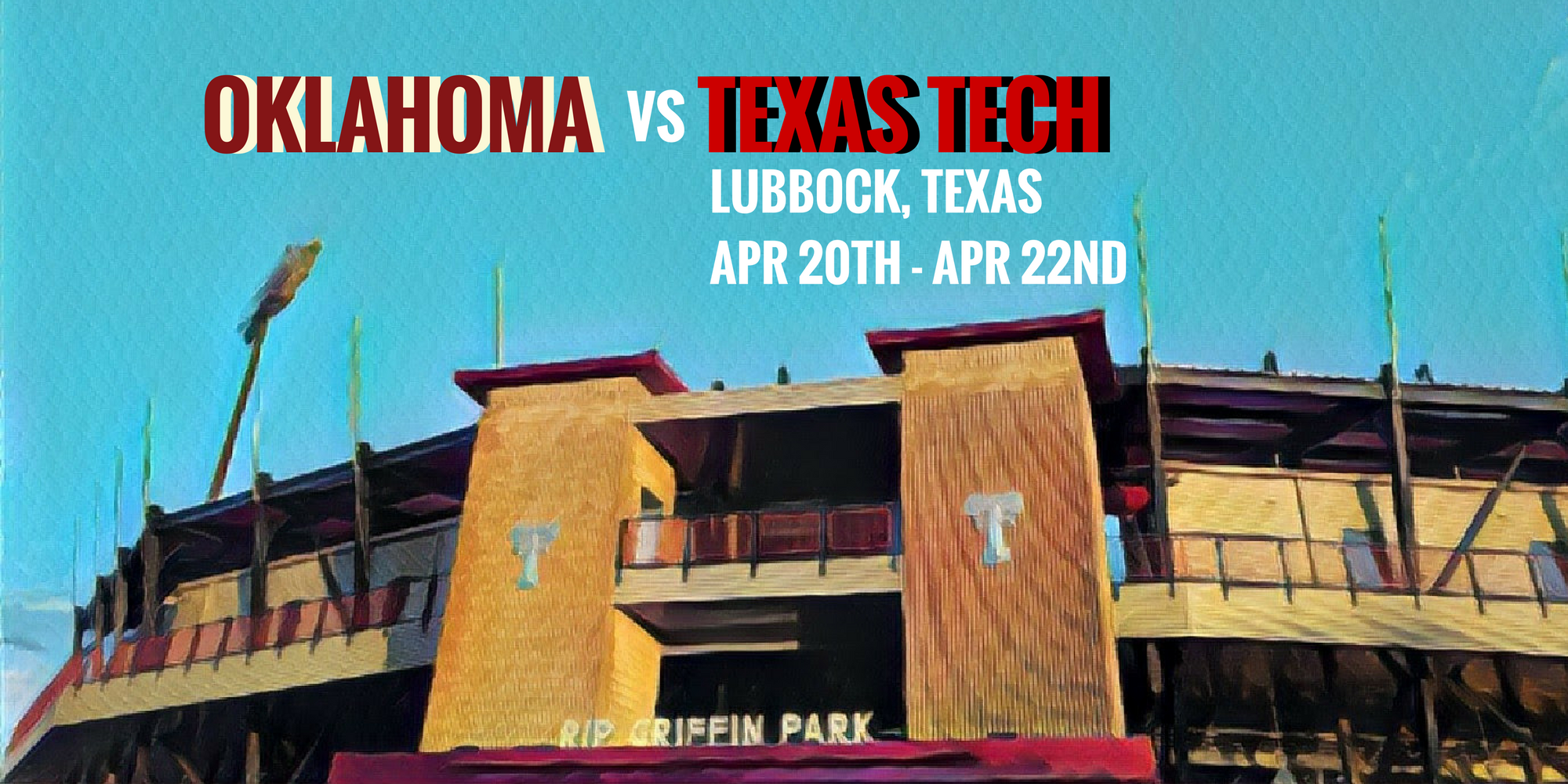 The Red Raiders host the Sooners in a key Big 12 series.

It starts to get very real on Friday. Before we go much further, please keep in mind that Friday’s game was moved up to 2:00 p.m., so get to the ballpark early. This series starts to decide the fate of Texas Tech in the Big 12 and where they finish in the Big 12 overall. Despite everything that’s happened with Texas Tech, the difficult road trip early in the season and now getting the easy part of the Big 12 slate out of the way, it’s time for the conference to settle.

The Sooners are swept West Virginia to start the Big 12, then swept Baylor, won 2 of 3 at TCU, and then finally a series, 2 of 3 against Texas last weekend. Texas Tech is coming into the series absolutely on fire on offense and tw of the three starters, Martin and Kilian, have been very good. I’m hoping the home ballpark advantage is real and very loud.

Jung, along with the No. 5 Red Raiders, are hoping their strong hitting performances continue against a stellar No. 14 Oklahoma pitching staff when the two Big 12 foes clash at 2 p.m. Friday to start a three-game series at Dan Law Field at Rip Griffin Park. The three-game set will conclude with 2 p.m. games scheduled for Saturday and Sunday.

“High intensity right now,” Jung said of the team’s mood after scoring 76 runs in its past four games. “Can’t wait to play the next day, to get out there and do it again. OU is a pretty good team that we’ve got this weekend. I think they’re ahead of us in the Big 12 race right now. So, it’s going to be fun.”

When Nathan Wiles walked from the bullpen to the mound Sunday, he showed nothing but confidence.

Wiles’ Oklahoma squad was down in the series 0-2 to Texas and needing a strong performance from the 6-foot-5 sophomore right-hander.

Balk off. I don’t even care that this is a terrible pun. Davis martin didn’t have his best stuff and Texas Tech battled, all danged game long to come out with a win over the Sooners. A balk that scored the winning run.

Davis Martin went 4 innings, allowing 7 hits, 2 runs, walking 3 and striking out 4, while throwing 86 pitches. John Henry Gonzalez pitched the 5th inning allowing just 1 hit, then it was a bullpen affair. Dylan Dusek could only muster 1 out in the 6th inning, then Jose Quezada was masterful in 3 innings, allowing no hits and no runs, while 3 striking out 3. Caleb Freeman finished the 9th and allowed 1 hit, while Ty Harpenau (W, 4-1) pitched the 10, allowed a run, but still got the win.

And really, we can start this game in the 9th inning, where Texas Tech is down 3-2. Grant Little gets on base with a fielding error and then Cody Masters walks. Cam Warren flies out, so that’s 1 away. Masters and Little move ahead a base as Michael Davis walked to load the bases. Cody Farhat walks and that results in Little tieing the game. In the 10th inning, OU gets one back to move ahead 4-3. In the bottom of the 10th, Holt grounds out, but up next is Brian Klein who singles and Conor Beck pinch runs for Klein. Josh Jung walks, moving Beck to second. A double steal moves Beck to third and Jung to second. Little grounds out to short, but Beck scores and Jung moves to third.

The highlights, especially the defensive plays are spectacular.

Take a look back at some of the highlights from today’s win over No. 14 Oklahoma. #WreckEm pic.twitter.com/pmWN0hpYVK

This was a heck of a game to watch, one where Tim Tadlock pushed the limits from third base coaches box to score the 4th run of the game, but it was a Josh Jung 3-run home run to start the game in the 1st that started things off. In the 4th inning, Cody Farhat was hit by a pitch, sole second, but the ball went into the outfield and Tadlock sent Farhat home after the leftfielder was lacksidasical getting the ball to home plate.

OU would come back in the 3rd, scoring 3, but Texas Tech would score 1 in the 3rd off of a Michael Davis Single and then score 4 in the 4th to put Texas Tech ahead for good. The scoring in the 4th was highlighted by a Zach Rheams 2-run home run and a throwing error by OU that led to Brian Klein scoring.

Caleb Kilian wasn’t great, but he only threw 79 pitches and went 5 innings allowing 5 runs, 4 earned (Texas Tech had 2 errors in the 3rd inning I think), walking 2 and striking out 3. Ryan Shetter was fantastic in relief, goign 4 innings and allowing just a run, while walking 2 and striking out 6. When you can get out of a game using only 2 pitchers, while the Sooners have used perhaps 10 thus far, that’s’ yet another advantage that Texas Tech will have on Sunday.

And when you watch the highlights: The third base coach waving Farhat home is Tadlock and don’t tell me he doesn’t want it . . . the two double plays, especially the one to Holt to Davis, was damn impressive as was the catch made by Little.

Here’s a look back at some of the highlights from today’s win over No. 14 OU. #WreckEm pic.twitter.com/IOOH22yajR

The Sooners got up early and never really looked back. John McMillon (L, 4-2) gave up 3 runs in the first inning and the bullpen was sorta inconsistent and just couldn’t keep things close. The 7th inning was a mess, Ty Harpenau started it and then it took 3 additional relievers to get out of it. then John Henry Gonzalez gave up 2 more runs in the 8th and Richard Gilvert and Connor Queen gave up 3 more in the 9th. The offense couldn’t get rolling like it did on Saturday, Josh Jung went 2-4 with 2 RBI and Zayne Willems also went 2-4, but with an RBI.