The Red Raiders fall to the Sooners.

1. Almost is Never Enough. So close. these are always tough to write after a loss and this one is no different. The only exception is that most likely, this version of Ten Things is going to be much shorter than normal. I think I’m working off of about 5 hours of sleep and am quite thankful for Day Light Savings Time this particular morning. Back to the game at hand, I thought this team really did their absolute best. They gave it their all and emptied their bucket and OU is the better team. I know, that’s not going to make anyone feel any better about what happened on Saturday night, and there was a time when this sort of game came out with Texas Tech winning the danged thing rather than thinking about what might have been. And honestly, I think getting Alan Bowman for the second half changes things dramatically, but that’s if’s and but’s. And one more aside, you’ll have to forgive me if I forget something or if something is a bit hazy, not having the luxury of notes during the game is a problem for me remembering stuff.

2. Dorsey Gave It All. On a night when Dakota Allen didn’t play a down (if he did, I didn’t notice it) Vaughnte Dorsey gave it all up. Every ounce of effort he had was on that field. Dorsey finished with 11 tackles, 1.5 sacks, 2 interceptions and a legal hit (opposed to some for OU that wasn’t called, but again, if’s and but’s) that knocked out Oklahoma’s starting tight end. Texas Tech isn’t even close to being in this game without Dorsey’s contributions and he was an absolute stud. I’m sure there are things that I missed (also not being able to rewind the game in my mind) but without question, an absolutely terrific effort.

3. Bowman’s Gone. Well, not literally, but I would not be surprised if Bowman is done for the year. Bowman was admitted to Covenant Health again last night for observation for a reoccurrence of his collapsed lung after taking a very tough hit to get the ball into the end zone to end the half. This is a problem for Bowman and one where I’d like to see him fully healthy before returning to action. I know that a bowl game and wins anywhere between 5 and 8 wins are on the line, but I think the issue needs to be fixed, whatever that is, before he plays again. We were a little worried about Bowman’s last game, where his quarterback rating was 101 and Bowman did bounce back in a big way with a rating of 180, completing 81% of his passes for 227 yards, 2 touchdowns and no interceptions. Texas Tech isn’t in this game without Bowman capitalizing on those Dorsey interceptions.

4. Duffey Struggled. Sometimes quarterback rating tells you the whole story, like Bowman’s performance against Iowa State and then last night against Oklahoma, but sometimes it doesn’t. Take Jett Duffey’s performance against Oklahoma where he had a quarterback rating of 160, just 10 points below Bowman. A similar game for Bowman would have been the Oklahoma State game for a comparison, very good, but not great. Duffey finished 9 of 17, 53% completion rate, for 139 yards and 2 touchdowns with no interceptions. But I thought the difference between the two quarterbacks was pretty significant. No points scored in the third quarter when Duffey got in the game. Some rough looks for Duffey who looked lost to start the game. The Texas Tech offense mustered only 2 first downs in the 3rd quarter, 14 rushing yards and 43 passing yards, versus 7 first downs, 45 rushing yards and 82 passing yards in the 4th quarter. Duffey definitely got better, but I got the sense that Texas Tech literally needed to score on every drive and Duffey and Kingsbury’s inability to get him in good spots was one of the reasons why Texas Tech was unable to come away with the win. And some of Duffey’s throws were pretty terrible. He’ll need to be better against Texas.

I should also mention that I think the deal here is that the starting quarterback for Kingsbury gets all of the game prep and all of the game planning. I think to do it any other way isn’t efficient and the best use of trying to win the game. The offense struggled once Bowman went down and it took a while for the offense to find its footing, but it eventually did and it was much better. I think given a week, Kingsbury will have Duffey playing much better.

The big thing for me though is that Duffey is simply not as efficient on the offensive side of the ball in comparison to Bowman. It seemed pretty clear to me, that Duffey simply has a problem with the short to intermediate passing game and that’s a real problem for Kingsbury because Bowman feasted on that. Opposing defenses will key on that sort of thing, I promise Texas will and Duffey has to figure out that his arm is his greatest attribute, not his legs.

5. That Oklahoma Offense Was Every Bit As Advertised, But Texas Tech Held Their Own. That is a ridiculous offense, an offense where you tell yourself, just stop Murray, but that’s darn near impossible. I thought the defense played their tails off and the biggest difference between the two teams was that the rushing offense for the Sooners was significantly better than what Texas Tech ran out there. The Sooners had 323 yards rushing alone and averaged 7.3 yards per attempt. The defense did a ton to try to stop the Sooners, again, without Dakota Allen, but they were just too good. When the defense made stops in the third quarter, the offense stalled. In fact, the Texas Tech defense was damn near terrific in the third quarter, stopping the Sooners on 3 of 4 drives in the third and forcing a punt, but again, the Texas Tech offense couldn’t capitalize.

6. Antoine Wesley. He Good. Antoine Wesley is so good and who would have thought (not me) that Wesley was the better player between him and Vasher before the season started. Wesley has shattered Michael Crabtree’s single season receiving yards, which was 10th all-time, and is on track to break some more records with three games remaining. Wesley finished with 12 catches for 199 yards and was just dominant on the left side of the field, a side of the field that hasn’t had a dominant player from I can’t remember when (think of all of the guys who have run through that left side of the field and how almost all of the dominant ones have been right side players).

7. Another Great Special Teams Peformance. Yeah, we’re talking about special teams and Texas Tech doesn’t stay in this game without Dominic Panazzolo’s punting, averaging nearly 50 yards a punt last night, including 2 inside the 20. Another terrific special teams play by Thomas Leggett to down the ball at the 1. More perfection from Clayton Hatfield going 2 for 2 from field goals (one that bounced off the goal post, but I’ll take it) and knocking 6 of 9 through the end zone (one being out of bounds on the onsides kick). I think that Adam Scheier has been really lucky to have a healthy Hatfield, that’s masked a lot of problems, but the difference between last year’s special teams and this one has been night and day. The mistakes are significantly lower and there are more big plays. Now, we just need to figure out how to take advantage of some punt return yards.

Tortilla Tossin’ Player of the Game: Dorsey. Without question. Played a helluva game.

Sheriff Star Defensive MVP: You could give this to a handful of folks, but I thought Jah’Shawn Johnson was stellar. 10 tackles and simply all over the field.

9. Quotes. Here are your quotes from Kliff Kingsbury last night. Here’s Kingsbury on the fight of his team.

Q. Were you impressed with the fight you saw from your team, just overall execution throughout the game?
KLIFF KINGSBURY: We have been fighting hard. We just got to find a way to win these games. We’re not getting it done at the end of these close games. And proud of Jett’s effort. I thought he came in a little bit sluggish. I didn’t give him good plays early, things he was comfortable with, but that’s a tough spot once again he’s thrown into and he competes and gives us a chance. So I was proud of his effort but we got to find a way to finish these games.

And here was Kingsbury’s quotes on not having Dakota Allen for most of the game, where Kingsbury said that Allen had some sort of leg issue, but wasn’t sure what it was.

Q. What did you think of your defense’s performance tonight? I know you gave up 600 yards but there were a number of times they got them off the field?
KLIFF KINGSBURY: Yeah, especially early getting those turnovers, giving us a chance to put some distance between us, and we really didn’t like we could have. And they’re a really, really good offense. That O line with that quarterback, I don’t know who will stop them the way that quarterback can move and run and then beat you in the pocket, he’s phenomenal. I don’t know who is better than him in the country or who has been better than him in the last however many years. He is a special, special talent out there.

Q. How much was your defensive plan limited or compromised?
KLIFF KINGSBURY: It obviously didn’t help. I’ve been proud of Riko and the way he’s stepped up when called upon last week and this week. But you’re talking about a senior veteran, very cerebral player, who gets us lined up and diagnoses things out there. And to not have him most of the game obviously didn’t help our cause, but those other guys played hard, he’s just a spiritual leader, a leader in a bunch of different ways.

And Kingsbury on emptying the bucket and Jett Duffey’s slow start:

Q. You guys pretty much emptied your bucket tonight didn’t you? You don’t really have any regrets, do you, about how you handled things tonight in terms of some key decisions?
KLIFF KINGSBURY: Yeah, I think the only thing was having a better plan for Jett early. I tried to do some stuff that I should have found a way to get him more comfortable at the start of that second half than I did. And so I wish I would have done that because once he got in a rhythm and he was competing and doing his deal, he played really well. So that — from my perspective that was it. But everybody played hard and I thought special teams, once again, gave us a chance in some areas. Punted the ball well, kicked off well, Clayton hit his field goals. And so that’s an area that continues to help us stay in games.

Personal: I took the opportunity to go for a run on Saturday morning, about 10.5 miles and pretty much ran all through campus. You sometimes don’t realize how terrific the campus is until you get to see all of it. 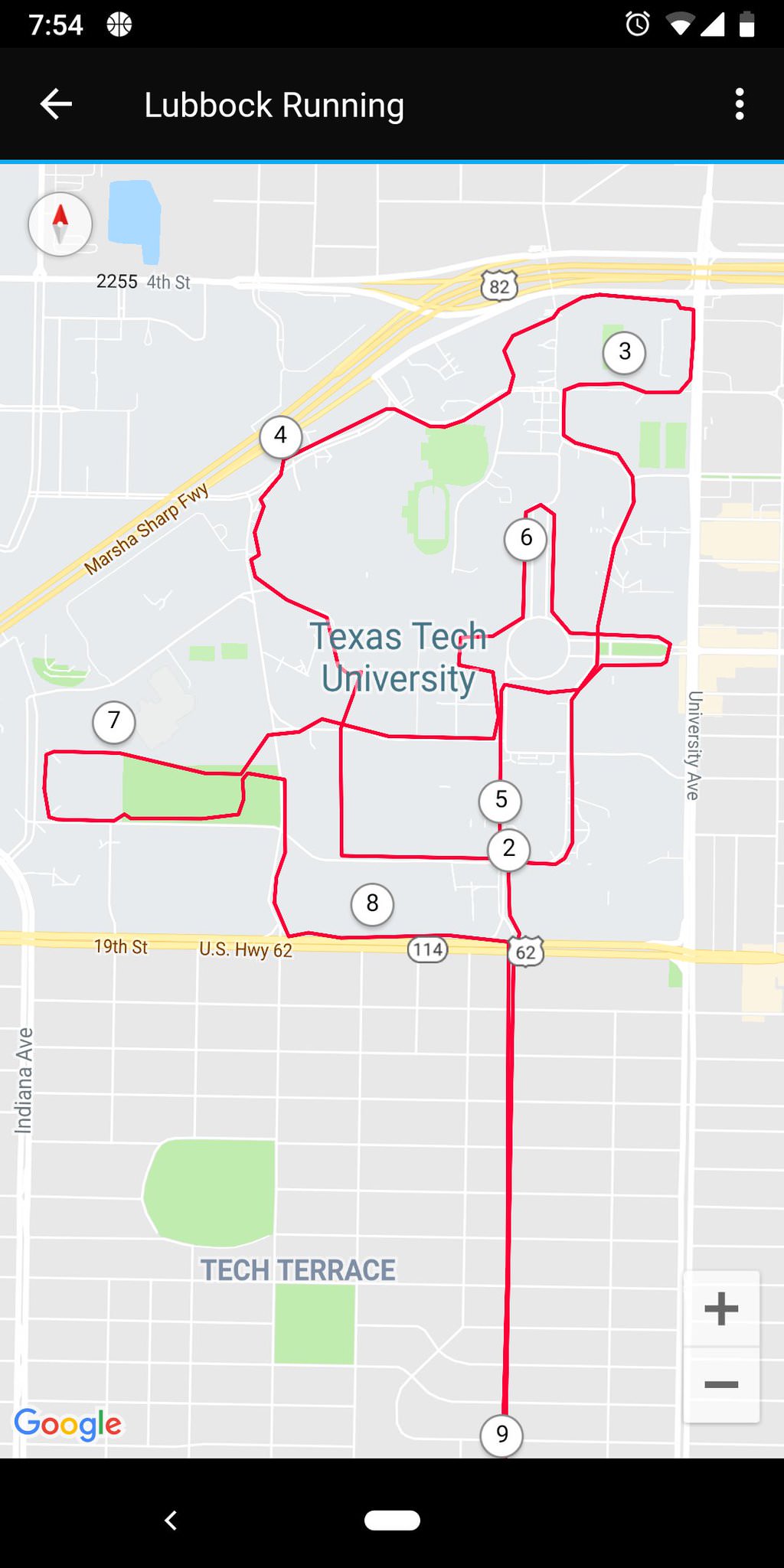 We did get Fufu for Youssouf (it’s the white stuff), a special trip for a special kid. I tasted it and it is a starch, kind of like a much finer cream of wheat. There’s no taste to it really, kind of like rice. 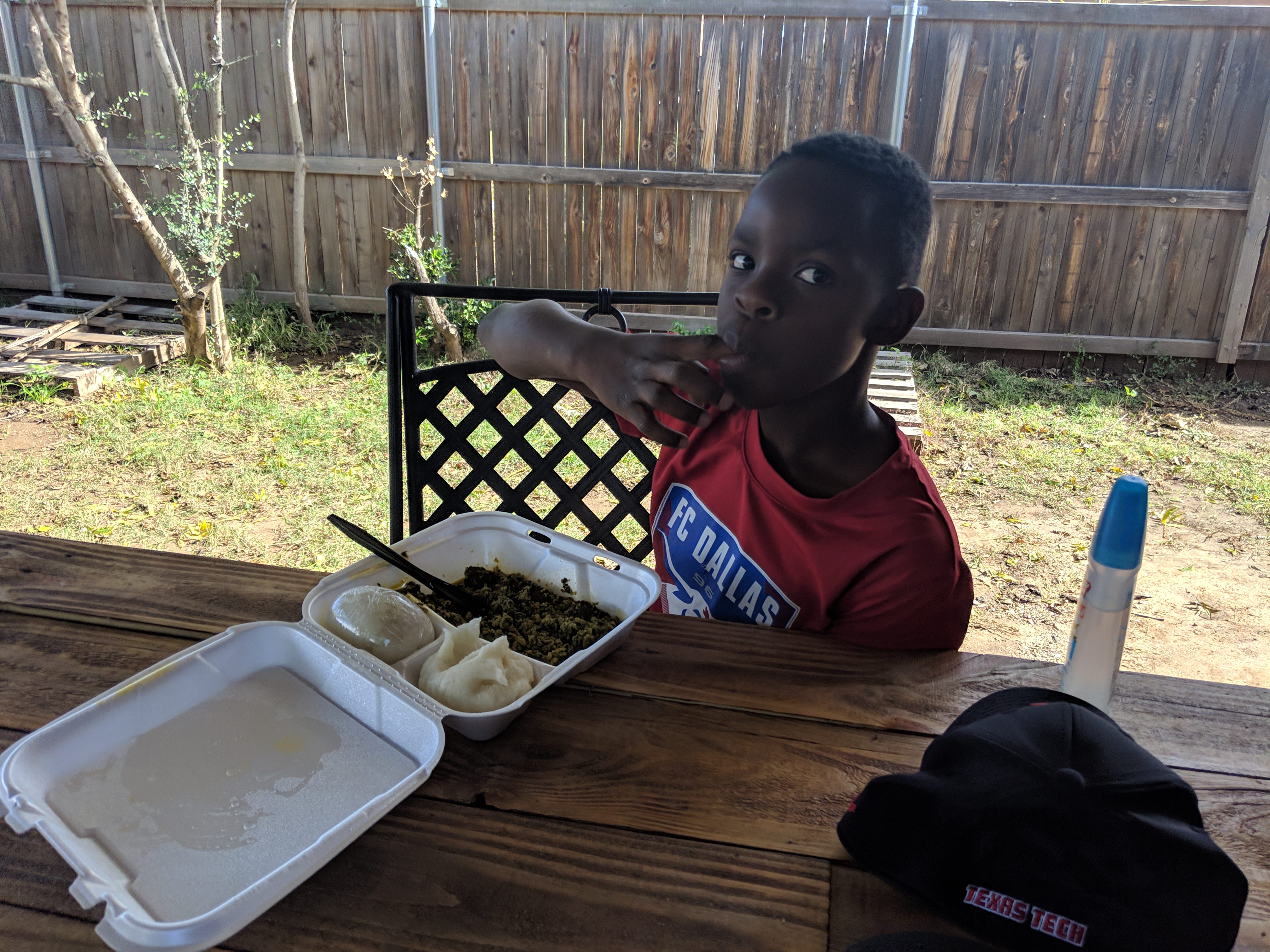 It was a fun trip, I’m lucky to call Texas Tech my university.. 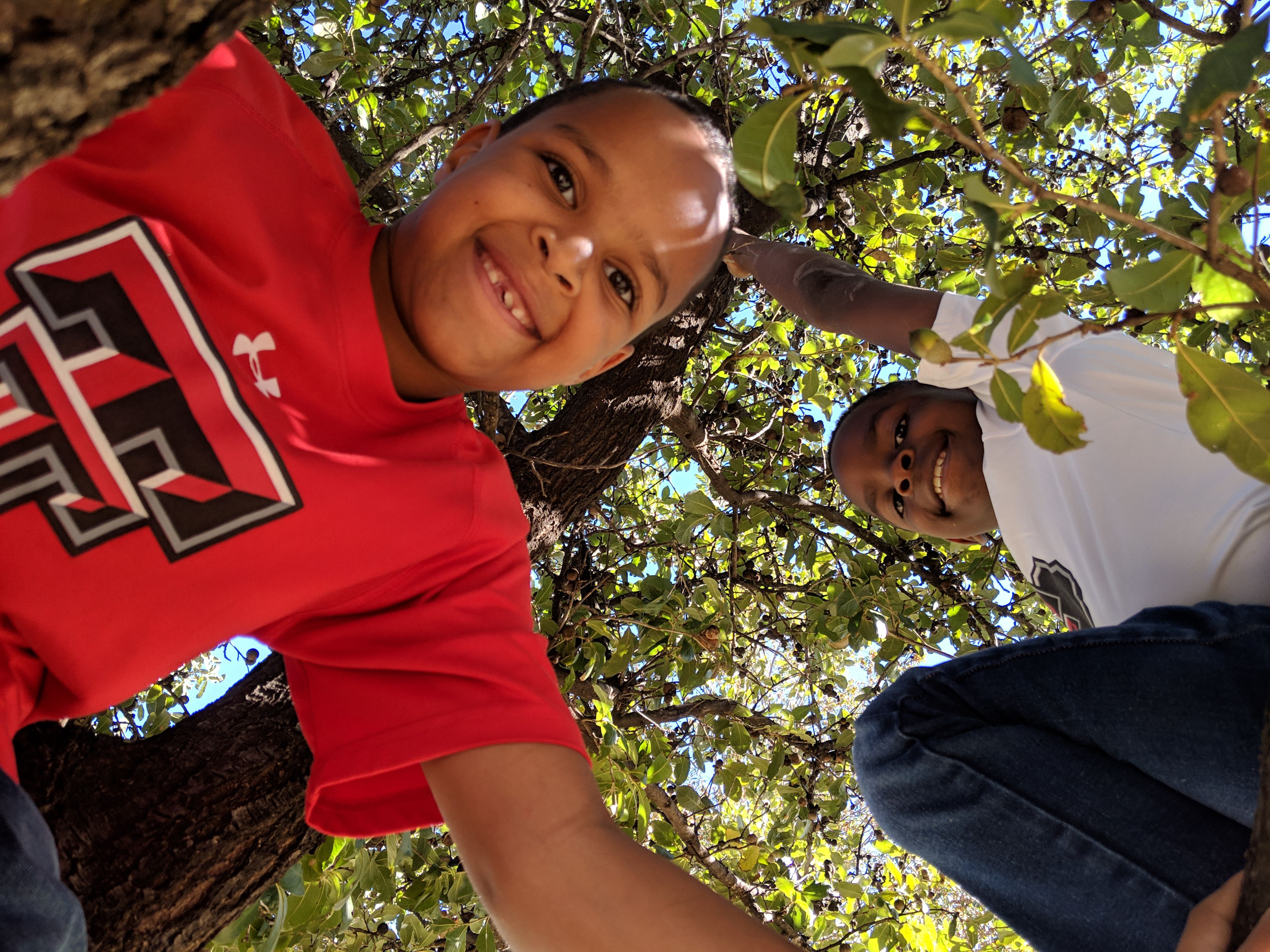