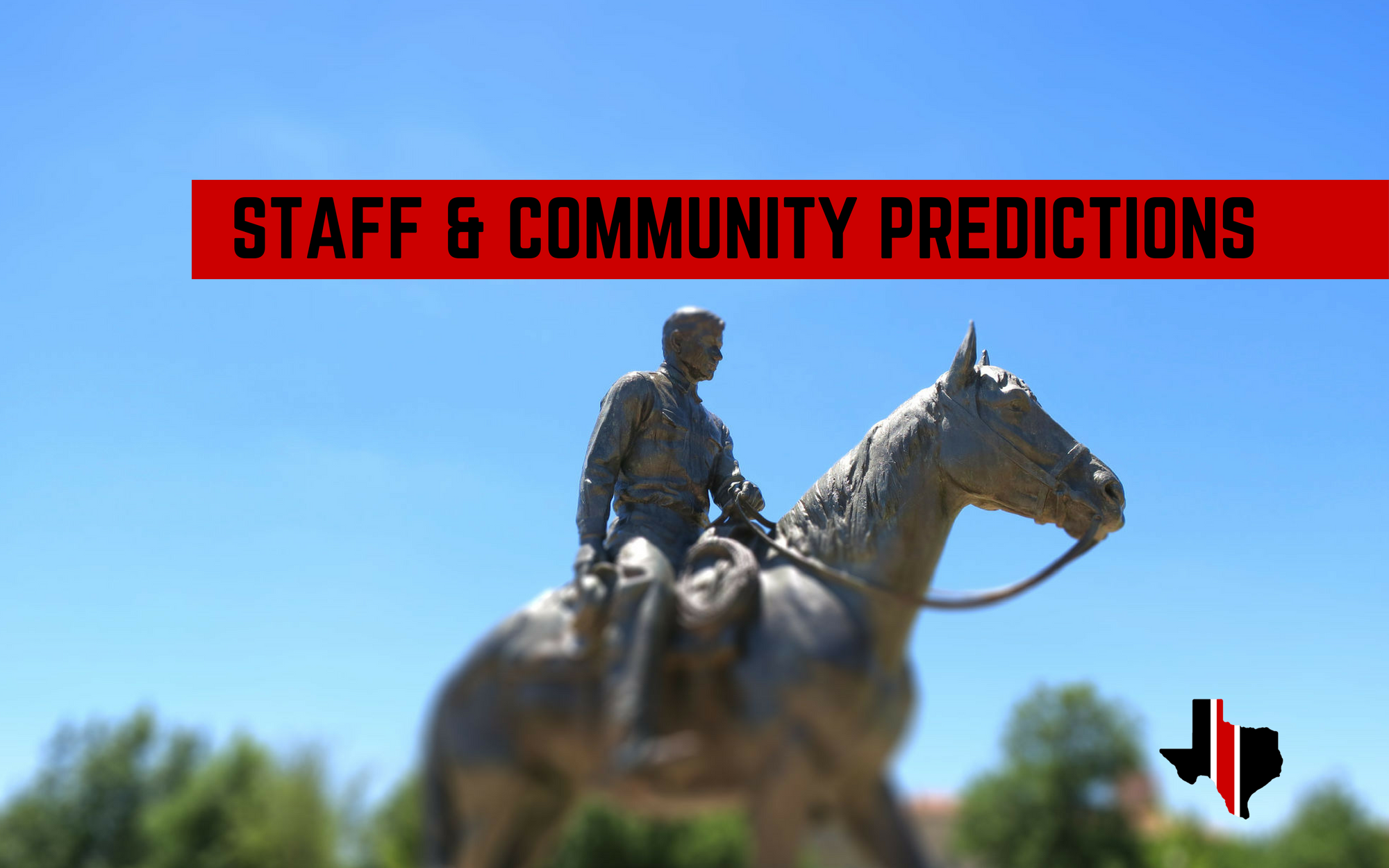 OddsShark has this an Texas favored by 1.5 and that’s the line we’ll go with.

Dan Swany
Straight Up (4-5): Texas Tech
Against the Spread (5-4): Texas Tech
Commentary: Well, I was the only STP staff member to pick Tech over OU and we almost did it… now my prediction comes down to the fact that I cannot ever pick UT to beat us in anything. This game will be a back and forth battle. Yet, in the end somehow, someway we find a way to beat the Longhorns. The students, the fans, the players, and the coaches need this victory and a chance to celebrate it. Look for another wild game in LBK this weekend. Wreck ‘em Tech!!!

Keith
Straight Up (6-3): Texas Tech
Against the Spread (5-4): Texas Tech
Commentary: I think these two teams are pretty similar. Both have effective offenses when they’re firing, both are struggling through injuries, and neither have great defenses, especially recently. I think the difference-maker this game will be the running game and I think Kevin Johns will get Tech’s rushing attack back on track. I think Red Raider rushers will run wild, Jett Duffey included, and Tech will leave this game bowl eligible with a rivalry win.

Michael LaBarre
Straight Up (7-2): Texas
Against the Spread (8-1): Texas
Commentary: If Bowman has been practicing all week and was completely healthy, I’d probably go with the Red Raiders this week. However, Texas may be a little mad after their close loss to West Virginia and Texas Tech typically hasn’t looked great with Duffey outside of the second half against West Virginia. Not only that, but Tech just keeps on adding to the injury report with Dakota Allen and a couple offensive linemen. Besides, for whatever reason, these teams have done well on the road against one another in recent years. I’ll pick the Longhorns in this one.

Spencer
Straight Up (4-5): Texas Tech
Against the Spread (2-7): Texas Tech
Commentary: I think the progression of Jett Duffey culminates with a victory over the Longhorns this weekend. Duffey won’t be able to do it on his own, though, and will need some help from the offensive line to help restart the running game. The Horns are likely without some of the biggest weapons on both sides of the ball as Hager and Collin Johnson are penciled in as being unavailable. I still have faith in the Tech defense, especially after getting past the OU offense and everything else being downhill from here. It’ll be a close game, but I think Tech will win by between 3-7 points.

Brian
Straight Up (7-2): Texas
Against the Spread (5-4): Texas
Commentary: Tech way out performed my expectations against OU, and I’m insanely proud of the way they played. I think they have a fantastic shot again against UT at home in another night game. However, if A. Bowman & Dakota are out, that’s incredibly tough sledding; moreso if we don’t remember that we learned to tackle (we looked like the 2015 D against OU). Duffey is going to have to be lights out, and the defense needs to generate turnovers. In the end I don’t think we’ll have enough juice. Unless they make the team watch the senior day video before the game the at half. If so, TTU by 69.

Seth
Straight Up (5-4): Texas Tech
Against the Spread (3-6): Texas Tech
Commentary: Actually keeping track of games makes me realize how bad I stink at picking games, but that won’t stop me from hopefully stopping that terrible against the spread picks. Let’s do this.

Predict the outcome of the Texas vs. Texas Tech game.
Created with Quiz Creator