Each week I’ll bring you a roundup of all of the rankings I can find out there on the interwebs. I’ll effort to post these on Wednesday hopefully when most have updated for the week. Early in the season, I’ll hide those that haven’t come out of their winter naps yet and just bring you the active stuff. On this list anything with a “Last Ranking” listed is from a preseason ranking, I didn’t go back to the end of June and pull those in as it’s not representative of this season’s team.

Just a disclaimer before we get started, I know you’re all educated and experienced readers so you’ll know that computer rankings like RPI will settle in after a few series are under the nation’s collective belt, so nothing to worry about there, things are a bit skewed at the moment. A few things about the rankings:

Do they all matter?

No, absolutely not, most of them are worthless and only exist because a baseball/statistics nerd decided to make them. Some are an attempt by various outlets to keep RPI live rather than updated weekly by the NCAA. Many are wholly subjective in the case of those from various news outlets or composites of many rankings affected by outliers.

Does that mean I won’t include them?

Why include it if it doesn’t matter? 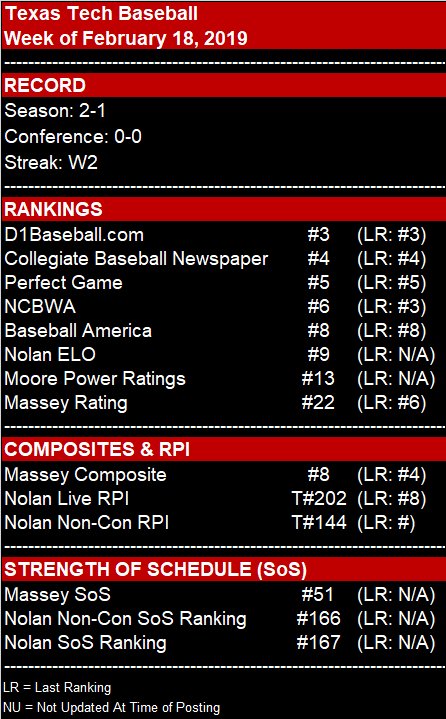