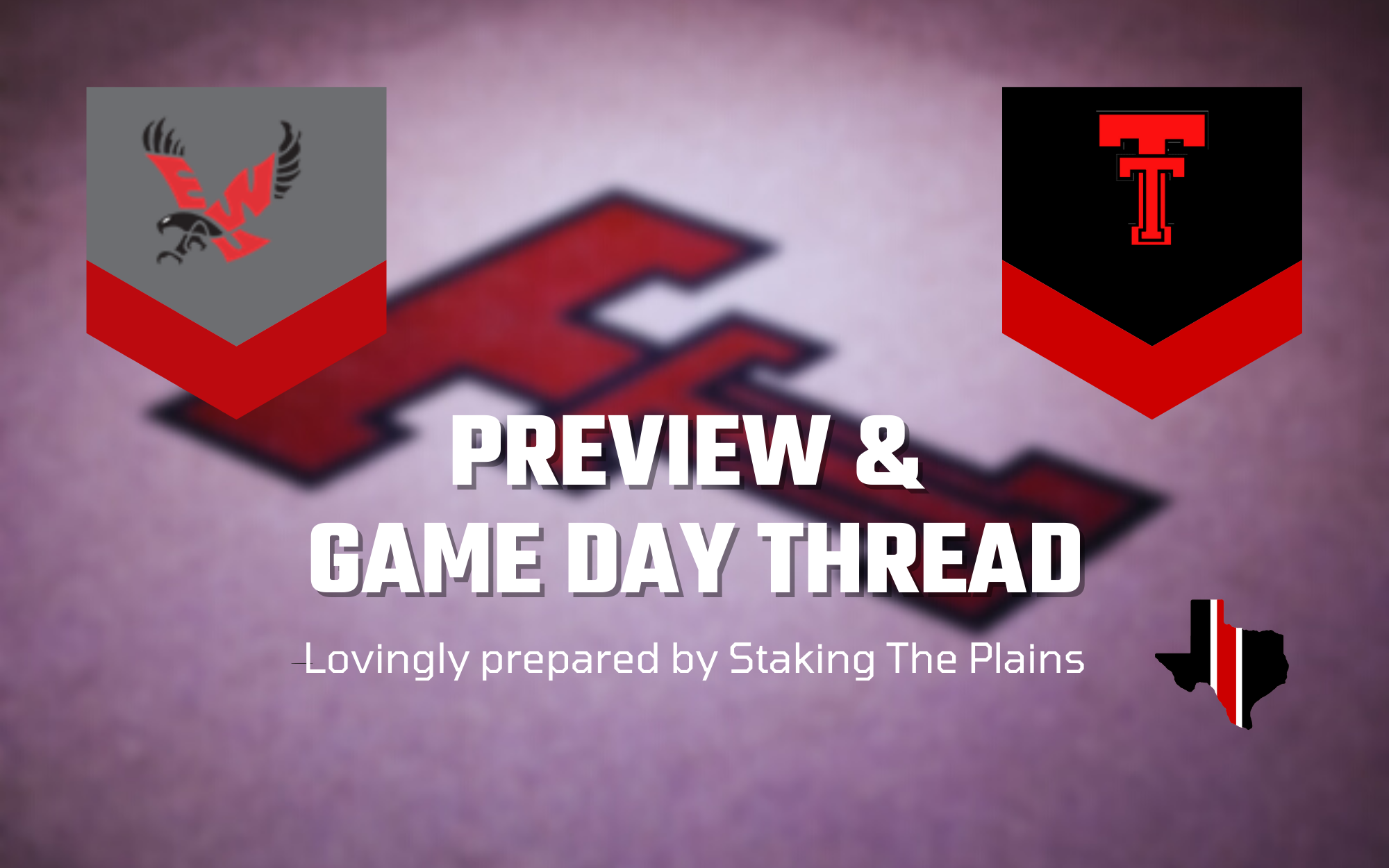 1. Stats. EWU is good, or better than the typical non-conference type of team Texas Tech plays. The Eagles are 120th in eFG%, 241st in turnover percentage, 253rd in offensive rebounding and 31st in free throw rate. That last statistic is the one to watch. I’d also add that EWU is 75th in three-point shooting and they are a very good free throw shooting team. Defensively, EWU is 119th in eFG% defense, 250th in turnover percentage, 206th in offensive rebounding, and 267th in free throw rate. It would be imperative for Texas Tech to get to the line. And as EWU is good at shooting the three-point shot, they are also 77th in the nation in defending it, but they don’t have anything inside that’s going to stop you from scoring.

2. Scouting. Bergersoen is the best player, but not the best shooter. He’s got a great assist rate and free throw rate and also good inside the arc, but only 27% from deep. Steele Venters didn’t play the last game, but was their main 3-point threat, making 49% (no lie) so if he plays, watch out for him. Price is a good shooter, so someone will need to be on him. Acliese is also a good shooter, is a good rebounder on both ends of the court.

3. How They Match Up. Checking in on Texas Tech, what’s killing Texas Tech’s offense is turnovers, 204th in the nation in turnover percentage. Everything else is relatively fine. I’d also add that Texas Tech is 259th in free throw percentage, which means they are not making the free shots. Defensively, there’s one glaring issue, which is that Texas Tech is 249th in free throw rate allowed. That’s not a good combination when the opponent shoots free throws well. The other item from a player perspective is that there’s really no player that’s passing the ball to open players. The offense is largely driven by one-on-one play which can be really tough. The only player with a decent assist rate is Wilson, who is still out a couple of weeks.

I think we can also presume that Shannon is not going to play today so it could make things a bit tighter than you want it, but that shouldn’t be an issue.

On Eastern Washington: “I think they will test our defense.” pic.twitter.com/tAmw0RlmHS

The Red Raiders (8-2) come into the matchup against EWU with a 12-game non-conference home winning streak, are fourth in the nation with a 13.0 rebounding margin advantage, seventh with 14.5 offensive rebounds per game and currently 13th nationally with an 18.6 scoring margin through 10 games. Tech, which fell 69-55 to No. 4 Gonzaga last Saturday in Phoenix, is second in the Big 12 with 149 free throws made and 41.5 rebounds per game along with being third in the conference by scoring 78.5 points per game. Defensively, Tech is limiting opponents to 59.9 points per game which ranks 33rd nationally.

Eastern Washington (6-5, 0-1 Big Sky) went 16-8 overall last season, won the Big Sky Tournament Championship and played tough against Kansas in a 93-84 loss in the first round of the NCAA Tournament. The Eagles won the Big Sky regular-season title in the 2019-20 and finished second last year. This year’s team is 6-5 with road wins over Washington State and North Dakota on its resume and is currently 0-1 in conference play with an 89-76 home loss to Southern Utah. The Eagles were led last season by Tanner Groves who transferred to Oklahoma after a season where he had 17.2 points and 8.0 rebounds per game, while Kim Aiken transferred to Arizona to highlight a couple star players from last year’s team who transferred out.