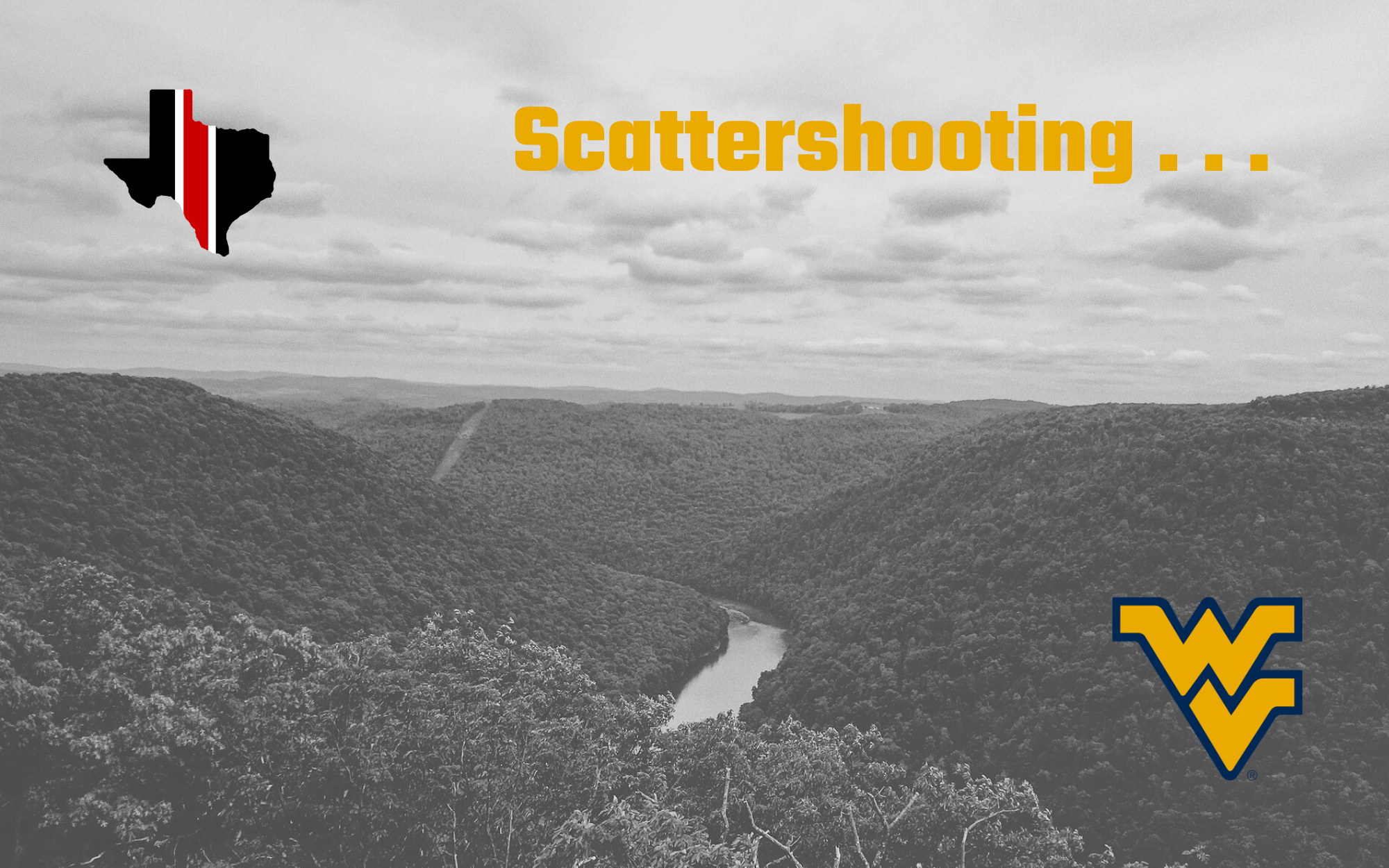 The Eers are up next.

When I was a kid or in high school there were two quarterbacks that I absolutely loved watching, one was Notre Dame’s Tony Rice and the other was West Virginia’s Major Harris. They were Texas Tech’s versions of Robert Hall, quarterbacks that were probably before their time. Harris led WVU to the National Championship game as a sophomore, but injured his shoulder in the National Championship game. Regardless, he was absolutely amazing:

The other awesome thing is that in 1988 West Virginia played Penn State and he called one play, but ran another where he ended up absolutely faking out an entire defense. This was a big deal 30+ years ago. I present to you, “The Play”:

According to the internet, Harris is an assistant wide receivers coach at a high school in Pittsburgh, which his his hometown.

West Virginia Things. I was very impressed with West Virginia’s offense, I think that Graham Harrell has definitely helped hte Mountaineers turn the corner and get away from screen-left and screen-right. It should also be noted that West Virginia had some nice special teams play, including a blocked extra point that was returned for 2-points. The other kicker is that West Virginia has a stable of good running backs and very big receivers. Defensively, I don’t know if Baylor just fumbled the ball, but West Virginia recovered 3 of them against Baylor and that’s probably the key to their win last week. Texas Tech opened as 3.5 to 4.0 point favorites and that line has settled at 4.5 to 5.5 at Bovada.

Up & Down in the Big 12. I watched zero minutes of Big 12 football this weekend. With that being said, it was a barn burner for the Baylor and West Virginia game where West Virginia wore blue helmets, yellow jerseys, and blue pants. That’s important because I read that they’ve never lost wearing that color combo throwback. Baylor is now 303 and 1-2 in the Big 12, same record as West Virginia . . . TCU remained undefeated as they hung on to beat Oklahoma State in overtime in Ft. Worth, 43-40. I would have thought that OSU would win this game, I was a believer in their offense, but they were shut-out in the 4th quarter . . . Kansas landed a bit back in reality as they lost the Sooners, 52-42. OU still has problems stopping opposing offenses, but the Oklahoma offense was obviously quite good, strong rushing games from Eric Gray and passing from Dillon Gabriel . . . I am very much unsure what happened in the Iowa State and Texas game, but supposedly there was controversy in regards to the end of the game. I just haven’t had time to figure out what that is. Regardless, ISU drops to 0-4 in the Big 12, Texas is 3-1.

As far as this week’s schedule, it starts with Kansas headed to Waco to face Baylor. the Bears are 9.0 point favorites and I’d guess that they will get back on the winning track this week . . . Oklahoma State will return home to host Texas where the Longhorns open up as 4.5 point favorites and I think I favor the Cowboys here . . . In the battle of purple, Kansas State travels to TCU, both teams are 3-0 in the Big 12 and TCU is favored by 5.0 points. This is the one time that I think they are home back-to-back and will be on the road back-to-back to face Texas and Baylor.

Internet Things. I pretty well checked out of all internet things this weekend, but I did think this was funny from the Alabama/Tennessee game.

I’m sorry, did this Tennessee lineman just vomit and turn it into an intimidation tactic…? pic.twitter.com/WyFBkICwTp

Other Observations. I hope everyone enjoyed their off-week from Texas Tech football.

Done. Shout-out to my crew. pic.twitter.com/KhQwnwwTQA

Rafal Nadal on why hard is good:

“One lesson I’ve learned is that if the job I do were easy, I wouldn’t derive so much satisfaction from it. The thrill of winning is in direct proportion to the effort I put in before. I also know, from long experience, that if you make an effort in training when you don’t especially feel like making it, the payoff is that you will win games when you are not feeling your best. That is how you win championships, that is what separates the great player from the merely good player. The difference lies in how well you’ve prepared.”