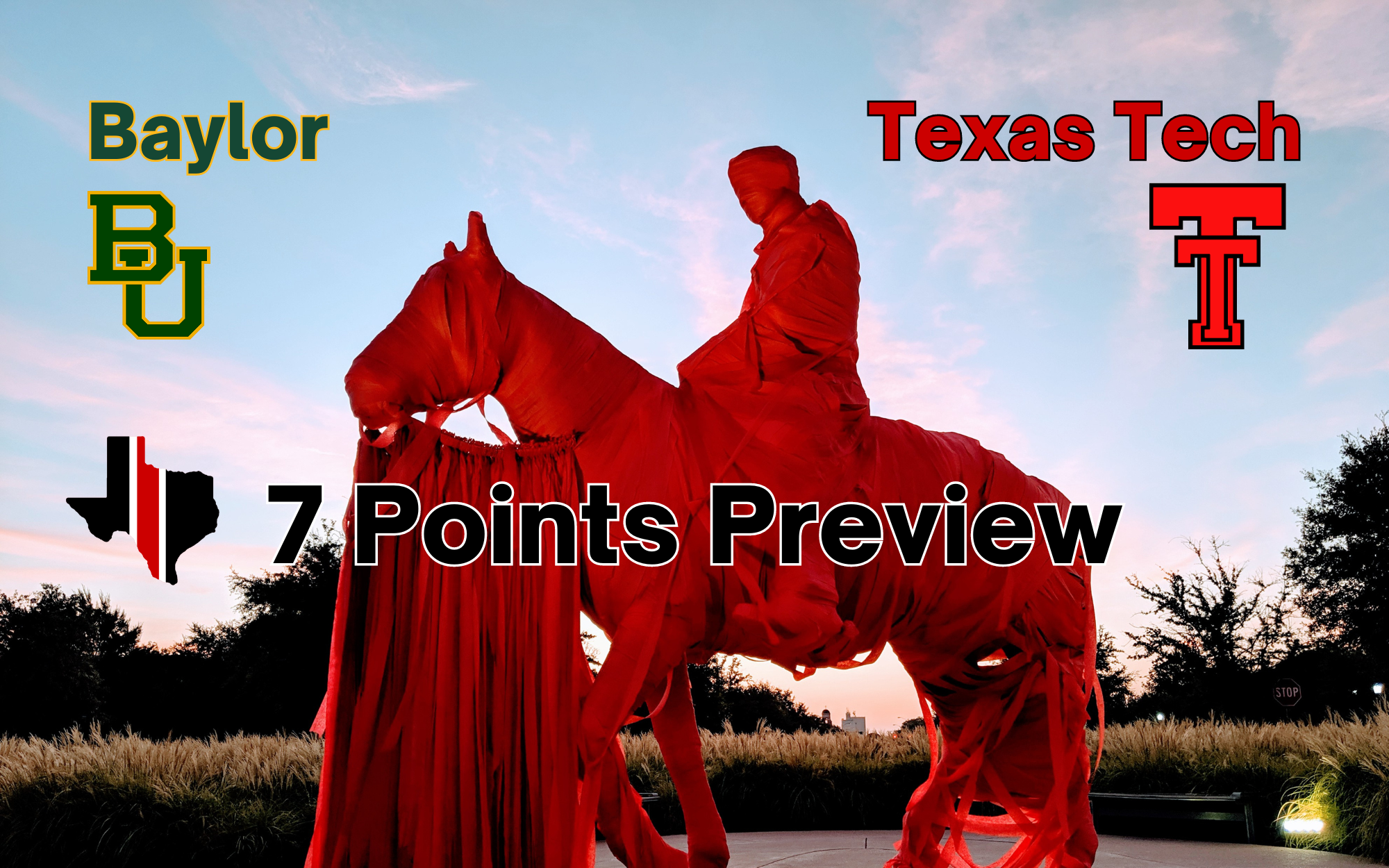 Advanced Stats: Much like last week, the advanced stats, save all but one, think that Baylor is a better team. Sharp Football continues to be an outlier and maybe a prophet. 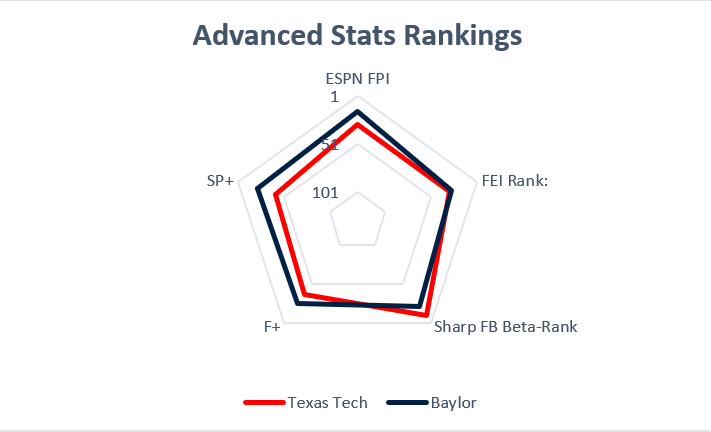 Texas Tech Offense vs. Baylor Defense: A lot of the things that Baylor is very good at, which is stopping the run and explosive drives, is not what butters Texas Tech’s bread. Texas Tech should have pretty good advantages as far as pass efficiency and sustaining drives. 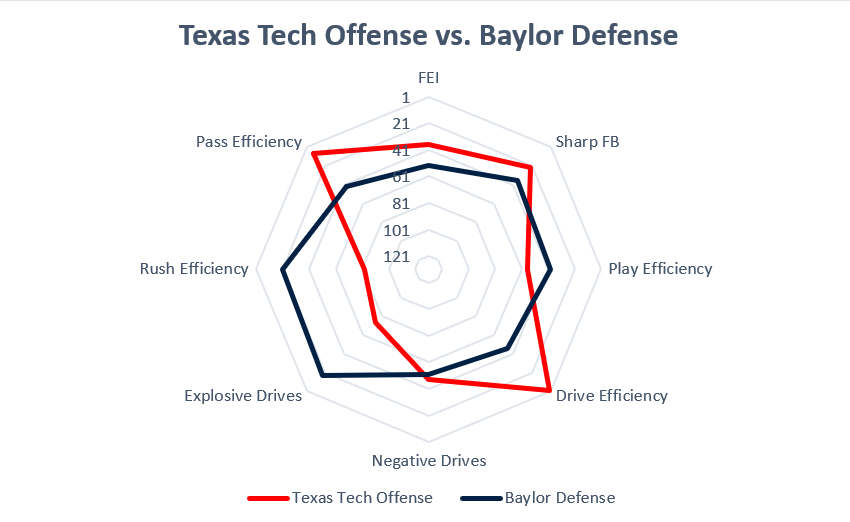 Texas Tech Defense vs. Baylor Offense: You’ve not going to believe this, but Texas Tech’s defense, according to Sharp Football is 10th in the nation. Again, that’s not a typo. The Baylor offense is very good, but these stats show that the Texas Tech defense, is, well, better. 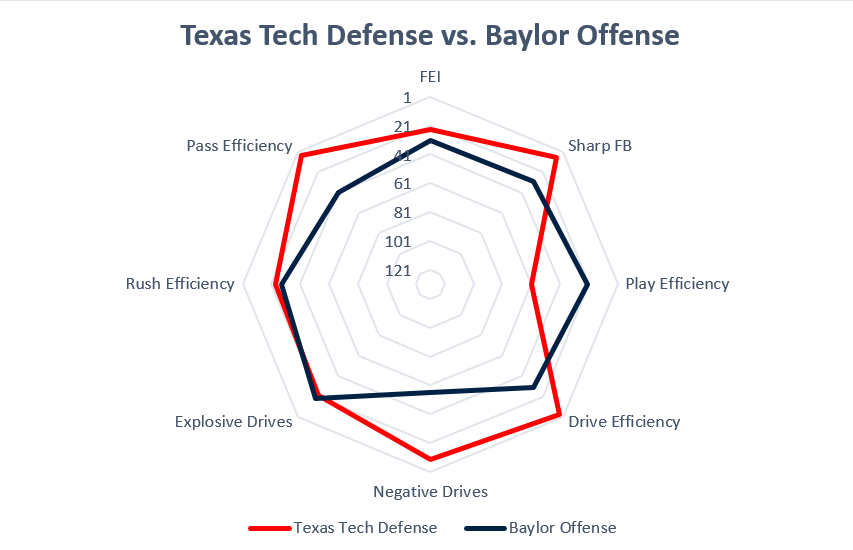 RB Richard Reese (5-9/175 | FR): Reese is going to be the guy to stop on Saturday and it wouldn’t surprise me to see Reese be the focus of the defense. Reese runs for about 92 yards a game, averages 5.54 yards per carry and already has 9 touchdowns. He’s a huge part of the offense and my guess is that there will be plenty of focus on Reese for Saturday night.

QB Blake Shapen (6-0/200 | SO): McGuire has talked about how Shapen is a dual-sport guy, playing both baseball and football. Shapen is averaging about 230 yards passing a game, is not really a running threat. He’s throwing for 8.6 yards per attempt, has 12 touchdowns and 5 interceptions. I mention below that he’s had some interception issues recently, but generally speaking he’s been really good and the 8.6 yards per attempt means that he’s throwing down the field.

LB’s Dillon Doyle (6-3/240 | SR) & Matt Jones (6-3/224 | JR): Doyle is the 2nd leading tackler with 36 tackles, and Jones is 3rd with 33. Not a ton of tackles behind the line of scrimmage, but they are making tackles. Jones does have 3 tackles for a loss and 1.5 sacks. You’ll note that I haven’t mentioned a ton of sacks and Baylor is 108th in the nation with just 11 sacks this year. That’s not exactly a lot so we’ll see how this plays out on Saturday, but I would have presumed that figure would have been higher.

DL’s Cole Maxwell (6-5/285 | SR), Siaki Ika (6-4/358 | JR), & Gabe Hall (6-6/296 | JR): These guys are sizable and they are experienced and as mentioned below, this line is good at stopping the run. This is the first time that I think Texas Tech has had to man-up against a guy who weighs over 350 pounds and Dennis Wilburn will likely have his hands absolutely full. I do think that we’ve heard very little about the interior of the line is a good sign, but these are sizeable human beings.

Key #1: Stopping Well Balanced: The best thing about Baylor is that they are incredibly well-balanced. They are 28th in total offense and 29th in total defense in the nation. The Bears are 27th in rushing offense and 50th in passing offense so they don’t necessarily rely on just one aspect of their offense over another. The defense is 16th in rushing defense and 66th in passing efficiency defense. Typically you see teams do one or two things really well, so it will be interesting to see which part they’ll rely upon.

Key #2: Turnover Bug: One of the thing that Joey McGuire mentioned in his weekly presser was that Baylor has had an issue with turnovers and he’s right. The last 3 games, Baylor has had 2 picks against Oklahoma State, 2 fumbles and an interception against West Virginia, and 1 fumble lost and 2 interceptions against Kansas. In fact, Baylor is 93rd in turnover margin, which is the same as Texas Tech, although Texas Tech has 13 total and Baylor has 11. The other weird stat is that Baylor has 8 lost turnovers at home, but only 3 on the road.

Key #3: Hold on 3rd Down: I was surprised how good that Baylor was, and usually the splits give indication that they’re better or worse on the road or at home, but Baylor is really pretty good regardless. At home, Baylor is converting 47% of 3rd downs at home and 43% on the road. For comparison purposes, at their best, Texas Tech converts 40% at home. So even their road conversion percentage is better than Texas Tech at home. That’s probably largely because of the power of the Baylor running game.

Will we really see 3 quarterbacks? We hear it every week and this very well may be the week that all 3 quarterbacks are healthy and ready to go other than week 1. The question is why is McGuire so adamant to say that all 3 will play other than the idea that he has packages where all 3 will be on the field. I’m not sure how that will work, but I think the idea is that with all 3 out there, you don’t know who is going to pass with all 3 being decent enough athletes to handle themselves at different positions. Would I risk Shough at receiver or running back? Probably not. Same thing with Morton as a potential defenseless receiver? I think that Smith is tough as nails, but even he had a banged up shoulder that allowed Morton to start. Maybe to keep all 3 engaged, but even then I don’t think that any one of them can’t read the writing on the wall. Be ready, sure, but playing all 3 doesn’t seem likely or necessary unless there’s just really poor play by one quarterback or another.

Uniforms. These are fantastic and I do not know why the beveled double-t is a thing.