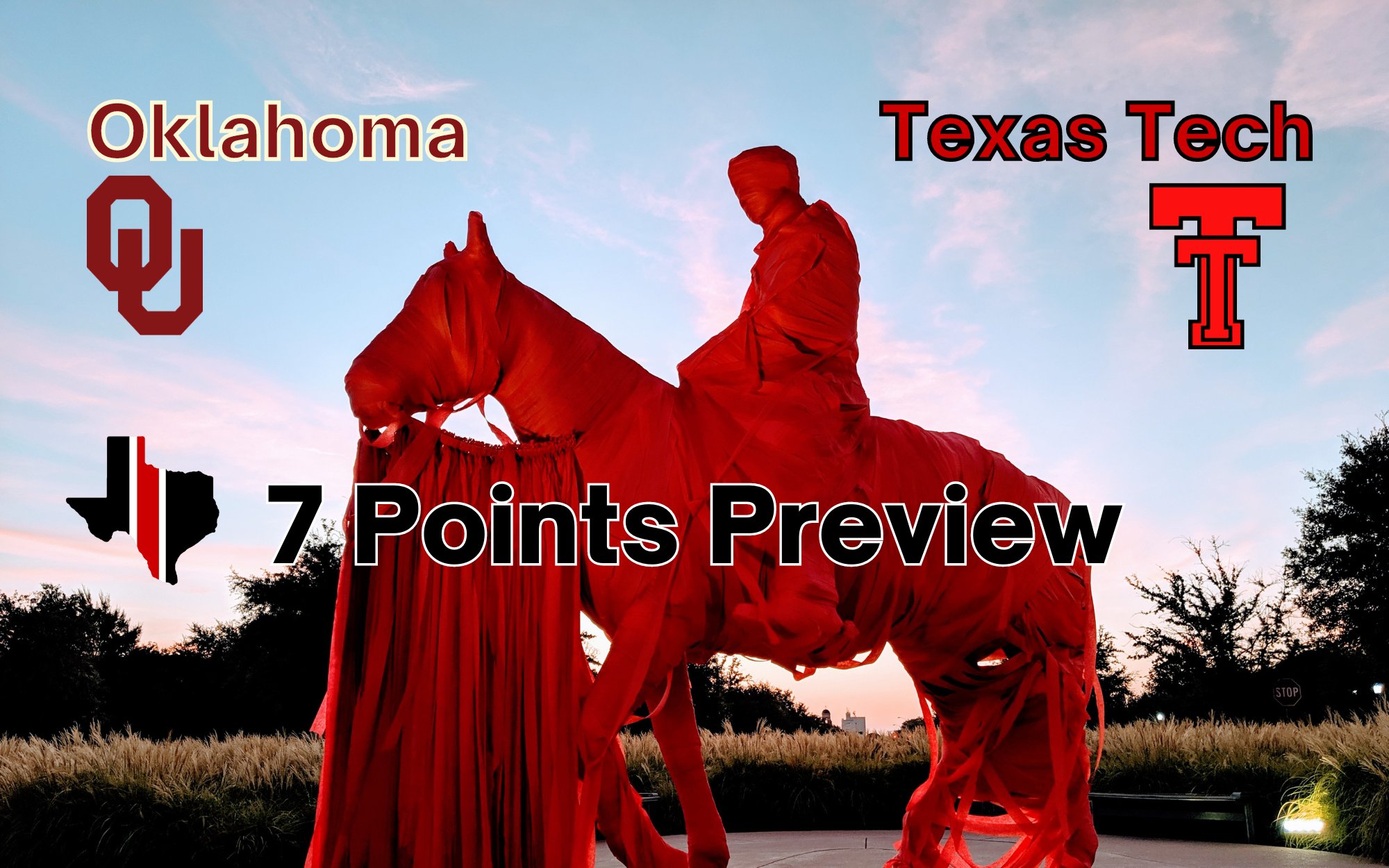 Last game (except for the bowl game)!

Advanced Stats: I don’t know if OU is still getting some preseason credit, but once again Sharp Football is the only outlier. 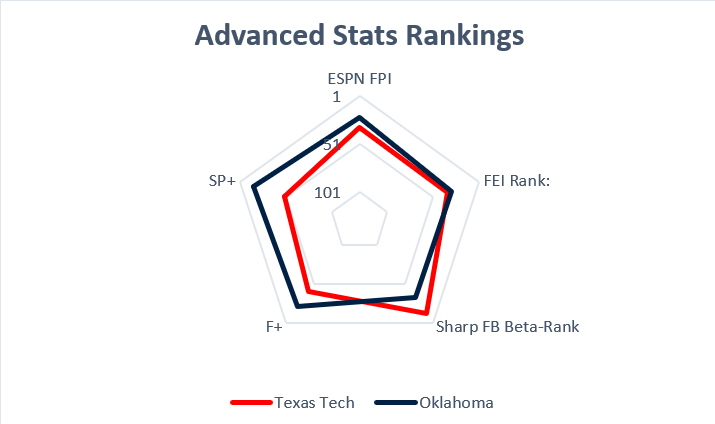 Texas Tech Offense vs. Oklahoma Defense: The Oklahoma defense is decently better than the Texas Tech offense in most respects. Texas Tech is better in sustaining drives and an ever-so-slight advantage passing. Gonna be another tough game for the offense possibly. 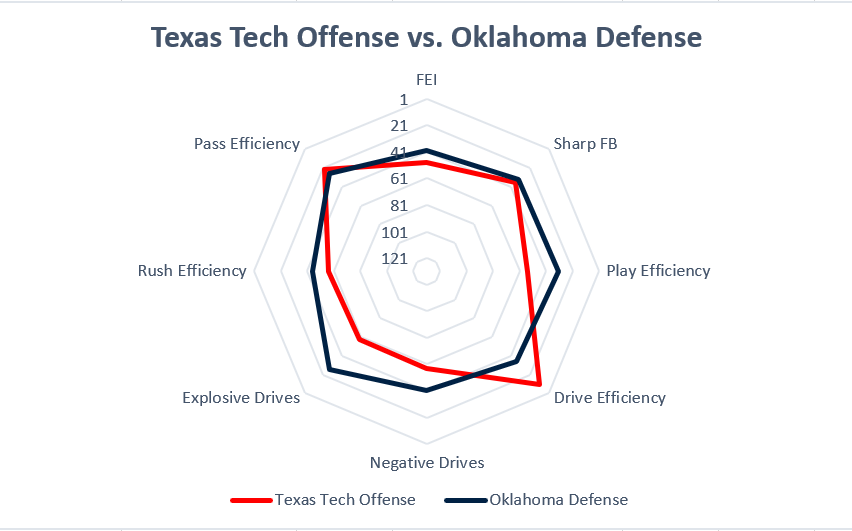 Texas Tech Defense vs. Oklahoma Offense: The defense should have the advantage here for the most part, particularly passing, which means that I could absolutely see DeRuyter loading up to stop the run. Texas Tech’s drive efficiency is #1 in the nation, sort of shocking, but pretty darned cool. 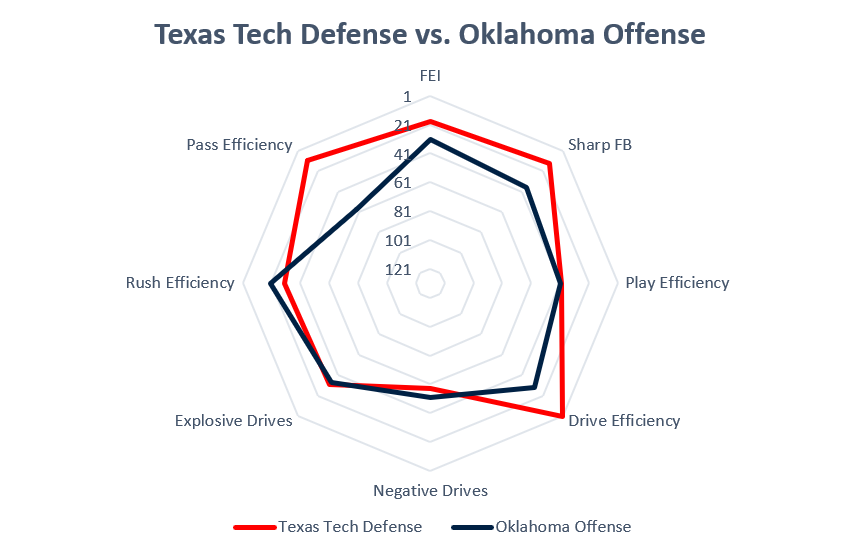 QB Dillon Gabriel (5-11/203): Gabriel has been okay, but not great. I sort of expected great, but that hasn’t happened. Gabriel completes 62% of his passes, 8.2 yards per attempt with 18 touchdowns to just 5 interceptions and about 248 yard passing a game. Gabriel can run, but probably not a runner, 4.10 yards per attempt with 5 touchdowns and about 28 yards total rushing a game.

DL Ethan Downs (6-4/260): Downs leads the team with 11.0 tackles for loss, which includes 4.5 sacks and 9 quarterback hurries. Only 33 tackles on the year, but Downs is making a lot of plays on behind the line of scrimmage.

LB Danny Stutsman (6-4/240): A guy that’s just all over the field. Stutsman has 100 tackles, 2 interceptions, 9.5 tackles for a loss, 2.0 sacks, 4 passes broken up, and 4 quarterback hurries. That is filling up a stat sheet and my guess is that you’ll hear Stutsman’s name a ton on Saturday evening.

Key #1: Take Advantage of 3rd Downs: Oklahoma is 81st in the nation in defending 3rd downs and 7th on 4th downs, so there should be opportunities for this aggressive Texas Tech mindset to be able to take advantage of the Sooner defense. And truthfully, Texas Tech should be able to take advantage of the Oklahoma defense because they are 128th in 1st down defense, so the hope is that those 3rd downs are short and convertible.

Key #2: Time of Possession: I think that time of possession during a given game is largely unimportant. So this could be an indication of a few things. Oklahoma is 129th in time of possession, so this could be a situation where the Sooners are just scoring quickly, 46th in scoring offense and not a ton of turnovers, 56th in turnover margin. But there also might be something to the idea that Oklahoma isn’t sustaining drives, but they are 31st in punts all year. It could also be that Oklahoma is giving up long sustained drives, which probably seems more accurate and that the defense is just having to be on the field a lot and not giving up big plays, but lots and lots of drives and yards.

Key #3: Complete Offense: Despite the struggles, the Sooner offense is pretty complete, 13th in the nation in rushing and 58th in passing, 51st in passing efficiency. Lots of really good offense for OU and the Texas Tech defense will have their work cut out to stop an Oklahoma rushing attack that sees plenty of work from 3 running backs and the quarterback.

Can the Oklahoma offense be stopped? Probably not. That’s likely my guess. Oklahoma runs for 200 yards at night or day, home or away, wins or losses, September or October or November. They just run the ball for 200 yards no matter what. What happens though is that the passing game takes a precipitous at home and on the road, passing for 297 yards at home and only 165 on the road. It should also be noted that the attempts per game drops as well, from 35 to 27 and the scoring drops significantly, 15 touchdowns at home passing compared to just 5 on the road. I’ve thought for a long time that inconsistent teams have a tough time winning on the road, which is generally true. Oklahoma is 2-3 on the road, the two wins were Nebraska and Iowa State, with bad losses to TCU, Texas, and a 3-point loss to a pretty terrible West Virginia team. I wrote above that I thought it might be beneficial to stop the Oklahoma running game as much as possible, and I still believe that, but limiting that passing game may end up being the key to a win.

I should also mention that OU allows 170 rushing yards a game at home compared to 218 on the road, so when they do poorly, it is largely because teams are controlling the clock, and the ball and just running it all over the Sooners. I’d bet a whole $1, just like Mortimer and Randolph, that Joey McGuire knows this too.

Grades! Defensive coordinating, the defensive line, linebackers, and head coaching look to have the best grades from last week (and deservedly so).

Tulsa World’s Guerin Emig: Guerin Emig: One player, one problem, one preposterous prediction and one pick for OU-Texas Tech

ONE PROBLEM
Gabriel’s receivers
The quarterback and play-caller weren’t the only Sooners to struggle against Oklahoma State. Tight end Brayden Willis fumbled around the OSU 10-yard line in the first quarter. Wideout Jalil Farooq dropped a slant on the first play following OU’s clever 40-yard trick-play kickoff return in the second quarter. Farooq dropped another pass on OU’s first drive of the second half, after Gabriel gained 14 yards on a QB draw and Eric Gray picked up 5 on a first-down run. Farooq worked back from his route to help Gabriel on a third-and-5 later in the third quarter, only to drop that throw as well.

Lubbock Avalanche-Journal’s Don Williams: Tech could return a lot of veteran defenders in ’23, but big hole looms on unit’s wide side

Replacements for Wilson and Merriweather are not as murky. True freshman Joseph Adedire is the heir apparent to Wilson at field end. He was a blue-chip signee and Wilson’s backup from day one this season.

DeRuyter has rotated four players at two linebacker positions all season. From one series to the next or within longer drives by opposing teams, Tyrique Matthews comes in for Merriweather at field linebacker and Jacob Rodriguez relieves Kosi Eldridge at boundary linebacker.

Rodriguez, who has two seasons plus a redshirt year beyond 2022, could succeed Eldridge, a fifth-year senior, and has the tools to become multi-year starter.

Matthews, with the Covid-bonus year option for 2023, could return with an eye on taking the baton from Merriweather. A special-teams regular his first three years, Matthews is playing a lot of snaps on defense for the first time in his career.

The Red Raiders would like to check two more boxes on the last Saturday of the regular season: Beat Oklahoma and they’ll finish with a record above .500 in Big 12 play for the first season since 2009. They’d also have the distinction of being the first Tech football team to beat Texas and Oklahoma in the same season.

“We talked about that a little bit yesterday,” Tech coach Joey McGuire said during his weekly Monday press conference. “(Linebacker) Krishon (Merriweather) said, ‘Coach, let’s do it just so we don’t talk about it ever again.’ “

I sort of think the road struggles for Oklahoma aren’t a fluke and I think Texas Tech is a pretty good football team at home. Since the Sooners are favored, it is no skin off of my back to take Texas Tech in this game. In years past, I’d be super-worried about Texas Tech being manhandled up front and things aren’t perfect, but I think one of the biggest things I’ve learned this year is that Texas Tech is a tough team, the lines for Texas Tech are okay and the Red Raiders can go toe-to-toe with Oklahoma right now.