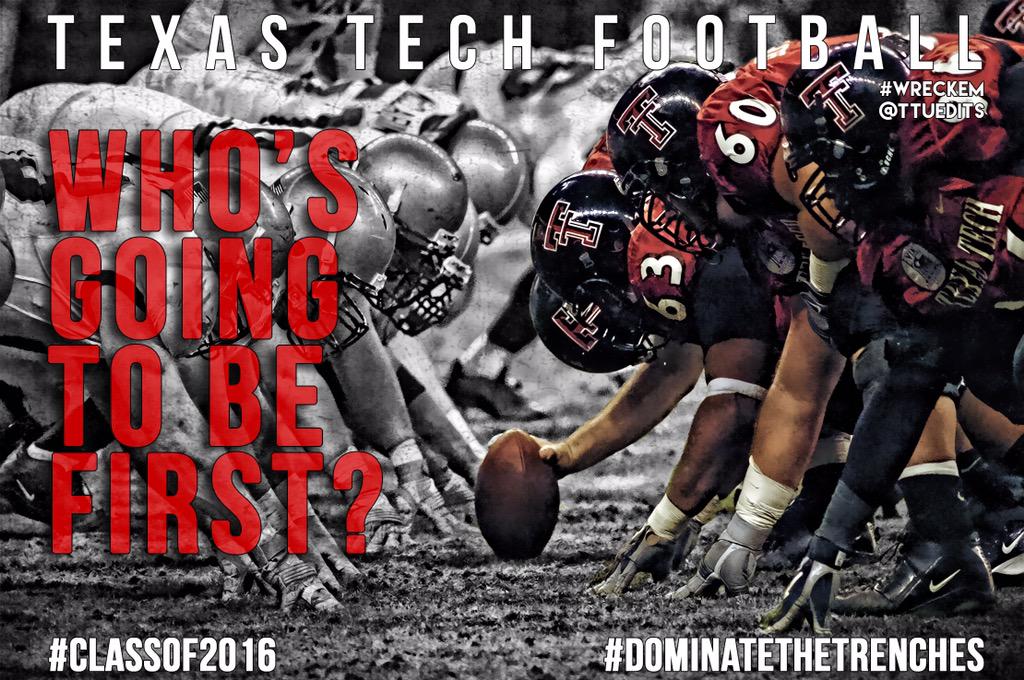 1. Let’s Talk Right Tackle. So, we’re all pretty sure that Texas Tech is going to start either Poet Thomas or Justin Murphy and that’s your scholarship depth. That’s it. Texas Tech has two, very unproven, players that will be expected to fill in immediately and play a significant role. I’d guess that Murphy is probably a bit more technically sound, but Thomas has the size and probably a bit more strength.

And if you ever said to yourself, “Kingsbury needs to move Poet to defensive tackle, and it needs to happen pronto.” Well, the reason I think that Thomas has stuck at right tackle is because Thomas is going to be your back-up right tackle and left tackle. Look up and down the roster and think about who the other options are at right tackle or at left tackle. There aren’t any. So, now you can be the smartest person in the room when someone suggests moving Thomas to defense this year. Maybe after this year Thomas does get moved, but it wouldn’t surprise me to see Thomas eventually take over that left tackle spot next year.

2. Four Out of Five. The good news is that you have starters up and down the other spots with Alfredo Morales at left guard, hopefully, Jared Kaster at center, Baylen Brown at right guard and Le’Raven Clark at left tackle. That’s really solid and the good thing is that Texas Tech will only lose two players next year, Clark and Kaster. That’s as solid of a group that you’ll see and no matter who is quarterbacking or running, they’ll be pretty good. I mention above if one of the outside goes down, there’s not much there, but inside, I do like the options with Tony Morales and we’ll have to see where Robert Castaneda, but I bet he flips between guard and tackle.

3. Recruiting JUCO’s. We visited this subject a while back, but Texas Tech continues to look for scholarship bodies and I think that’s a good thing. Two JUCO players would give Texas Tech some much needed depth and it would allow the incoming freshmen the time to redshirt. If there are no JUCO’s that end up arriving, then I think you’ll definitely see at least two redshirts removed from this year’s class. Oh, and you want my guesses of who might have their redshirt removed if this does happen? Glad you asked. My guesses are a bit unconventional, but here goes. I’d guess that Cody Wheeler and Terrence Steele would play, the two least heralded players. My reasoning? Wheeler would most likely replace Kaster unless Castaneda steps in there or maybe Brown. And Steele because I think they would rather flip someone to the outside (Castaneda or Brown) if a tackle is injured.

4. The Other Reinforcements. There may not be two finer athletes than Madison Akamnonu and Conner Dyer. They are, largely, the best two recruits at a position of need, which is tackle and I think they will be fantastic. Good kids that work hard and are anything but reaches. Depending on how things play out, Dyer and Akamnonu, if things are not a complete disaster (see item 5 below) then they should redshirt, spend a year as a understudy if they can’t push up the depth chart and then essentially play as sophomores until they graduate. That’s pie in the sky stuff, but that’s what springs are for. And I should also mention that I haven’t really talked about Trace Ellison as much, and that’s not a slight against Ellison, who I think also has the chance to play at tackle, but he’s a bit behind Akamnonu and Dyer.

5. Not Far Away From Disaster. This feels like a bad omen, but let’s rip off that band-aid and discuss this. If Clark goes down, I think there’s a really good chance that this thing falls apart on a pretty epic level. It would mean two first-year starting tackles on both sides and I think there could be some pretty serious scrambling about where some guys would play. I think there are enough pieces inside where you could sustain two injuries, but not to Clark.

The cover photo is courtesy to @TTUedits.  If you’re not following him, you need to fix this right now.