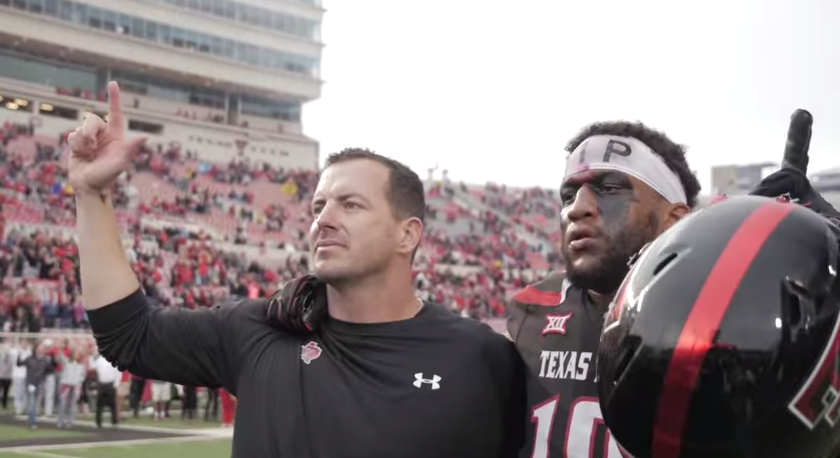 Texas Tech co-defensive coordinator Mike Smith joined Chuck Heinz and Aaron Dickens on The Morning Drive on Friday and these are my ten thoughts on the interview. This is not a non-transcript, so make sure and give it a listen.

1. Smith said that he hasn’t been more hungry to get started this year. Said that everyone is working and grinding and they know they have a lot to prove. It wasn’t a great year and everyone is on a mission.

2. Mentioned the tough early season stretch with TCU, Baylor and Arkansas and that’s what this team needs, to prove that this team is different. Is telling people that we’re different creatures as a team.

3. A large part of this is mentality, it is a tough man’s game and that’s what Texas Tech had to get better at. This group has bought in and this group has bought-in in training, Rika Levi is 320 and guys are moving around and Smith is incredibly proud of his guys.

4. The leadership has been great, last year Texas Tech had a bunch of great guys, but not a vocal leader. Need a vocal guy, for example, they were doing sleds and it was hot, and last year they were fighting and this year they’re working together. Awe and Robertson trying to lead.

5. Rika Levi has lost almost close to 40 pounds. Gave him a goal and every day he’s fought to get there. Embarrassing the way that we played last year and want to prove that they are different players.

6. Josh Outlaw has made a bunch of progress, and the thing to like about him is that he’s got some “dog” to him, he has a long ways to go with football knowledge, but if you’ve got balls and heart, then you can go a long ways. I’m pretty sure Smith said this. Positive he said balls. Anyway, Smith mentioned that Outlaw has got to get better with his eyes, but you want those big nasty guys that are going to be a bit mean.

7. Gibbs is more even keeled and he coaches like a NFL coach, not always yelling and freaking out. Treats you like a professional do. Love his scheme, does a great job of breaking down an offense and have learned a lot of football from him.

8. Up front, everyone is returning, so Breiden Fehoko will add some depth, but he’s got a ways to go. The biggest thing has been the development and can’t wait to see how these guys are different, Firmly believes that we’re going to be different and believe that we can be the best ones in the nation. We have to be successful and add Rika and the jump that he’s made. It’s a good group and for Texas Tech to be successful on defense, and knows that Texas Tech got to be good up front. He makes sure to let those guys know this every day.

9. Tough in the Big 12 when quarterbacks run, that’s what makes Boykin so good and Pat so good, the fact that they can scramble, and then add the running game and it’s a different conference and makes it fun. It is definitely a challenge, but feels like Texas Tech is up to it.

10. More verbal commits, more luck of the draw than anything. there is not another staff that recruits as hard as we do. We all write 4 letters every day and these are hand-written notes and if you go on vacation, you have to write the whole week’s worth of notes. there is not another coaching staff that does what we do and we relate to the kids more than some. I think it’s starting to pay off with the class that we’re signing.