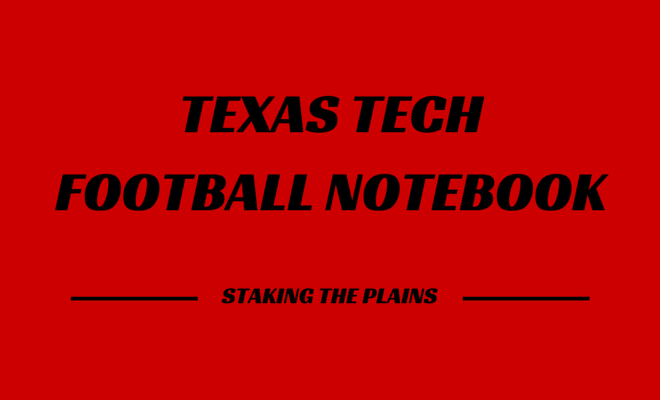 Kickoff Luncheon. The official site has details on this year’s kickoff luncheon, which is set for August 20th. If you’re looking to get a table with Kirby Hocutt and Kliff Kingsbury, then you’re out of luck, as those tables are sold out as well as the offensive and defensive coordinators. The always entertaining Emily Jones McCoy will emcee the event.

Here to Stay. LAJ’s Don Williams takes a look at Kliff Kingsbury’s contract and opines that Kingsbury isn’t in the hot seat because of the investment in Kingsbury and Williams opines that pretty much no matter what, Kingsbury will be the head coach through 2018:

On that note, it’s worth drawing a historical analogy. It was 25 years ago this November that then-Tech AD T. Jones made headlines across the country when he gave Spike Dykes a 10-year contract extension, as rare then as it is now. At the time, Spike had gone 24-21-1 in his first four seasons.

Considering Jones’ gesture came four days after the Red Raiders had finished 4-7 (they’d started 2-7), dousing the good feeling from the Cinderella 9-3 team of the year before, the extension provided a strong endorsement.

I had a conversation with a client just the other day, he said that he thought Kingsbury was on the hot seat and I just don’t think he is and I mentioned the idea that those teams that are consistent, even if there is a losing season or two, will eventually be rewarded with a terrific program if you stick with it. Consistency creates success, especially if you believe in the head coach and I’m almost all but positive that Hocutt does.

Miscellaneous. Via the OA Online we check in on Bradley Marquez at the St. Louis Rams’ preseason camp . . . I’ve done a poor job of keeping up with LAJ’s Don Williams all-Texas Tech team and he’s got it summarized right there, including the latest update of Gabe Rivera at defensive tackle . . .