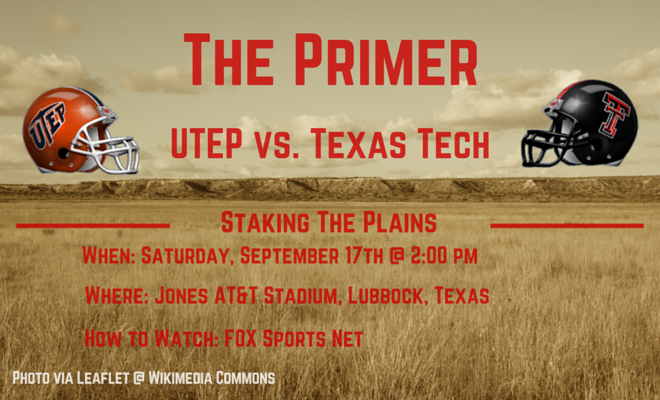 We start looking to Texas Tech’s next game as we look at how the UTEP Miners played in week 1 against Arkansas.

Last Week: UTEP lost to Arkansas 48-13 (ESPN), thanks in part to an offense that really couldn’t get going, only 146 passing yards and only 58 yards rushing. Pat of the problem was that UTEP lost 2 fumbles and threw an interception while Arkansas didn’t manage a turnover. The Arkansas defense was very good, allowing UTEP to only average 1.7 yards a carry. Arkansas took advantage of some pinpoint passing from Brandon Allen, who completed 14 of 17 for 308 yards and 4 touchdowns. UTEP also gave up 182 yards on the ground. Aaron Jones continues to be the workhorse of the Miners’ offense, rushing 15 times for 70 yards and catching 6 passes for 83 yards. Texas Tech might want to make sure he’s covered.

GET CAUGHT UP ON THE REST OF THE BIG 12, VISIT LANDGRANT GAUNTLET

What’s at Stake: UTEP is most likely looking to shore up a rough outing against Arkansas, trying to get that offense on track, in particular the running game. You’d guess that would be a priority. Texas Tech will look to

Miscellaneous: Don’t look now, but Mack Leftwich is the starting quarterback and he’s sorta tiny, 5-10/190, but he actually throws a really nice ball, or at least he did in high school, and he really looked pretty good in his high school tape. He’s a better passer than Jameill Showers was last year (at least on film in high school), but let’s wait to see how that translates . . . Dashone Smith led the Miners with 5.5 tackles, including 1 TFL . . . UTEP did not register any pass break-ups. Not a one . . . A ton of defensive players saw time on Saturday, so that high tackle of 5.5 was just about it, 7 players had 2.5 to 2 tackles, 2 players had 1.5 tackles and 10 players had 1 tackle . . . It looks like Leftwich checked down to Jones quite a bit with Jones catuching so many passes, he’ll have to look down the field a bit more . . .