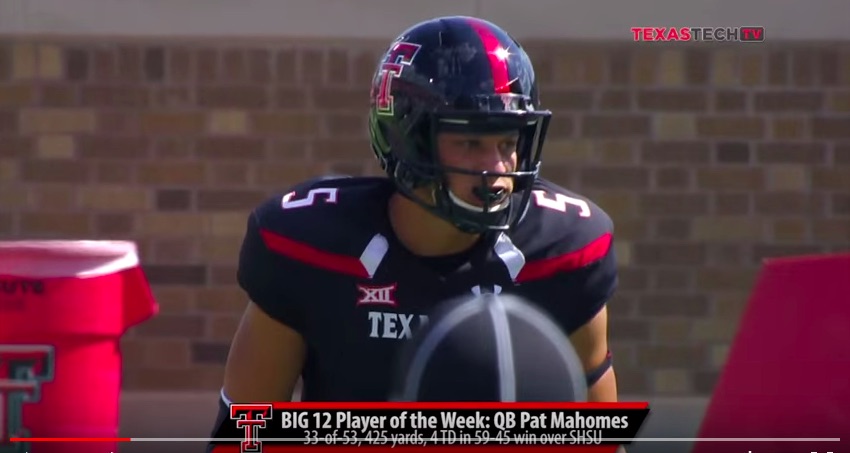 The Texas Tech offense has struggled with consistency and timing for years. In only five career starts, Pat Mahomes is bringing a real rhythm back to the Air Raid, and Tech fans are enjoying the show.

It’s a subtle sound, but often he’ll draw out a note on his weathered guitar just a fraction of a beat too long. Other times, he’ll stretch a word in a way that no one else dares to. Listen, really listen, to Willie sing It Always Will Be and notice how he adds an extra “will” into the chorus of the song.

It’s a style wholly his own and when coupled with his songwriting genius, it ensures that the Willie Nelson sound will be resonating in our ears long after he’s gone. Syncopation defined is a rhythmic technique in music in which the accent is shifted to a weak beat of the bar. But often that’s not what Willie is doing. He’s not playing in the “and” beat. Instead, he’s playfully toying with the sound in a song, surprising us with a note when we expect silence; silence when we expect a note.

To be sure, Willie Nelson would likely drive Fletcher in Whiplash to an early death from forehead explosion. But Willie is not playing outside of tempo; instead he’s playing just on the edges inside of it. And while it can occasionally sound a bit disjointed, his chords and words almost always stay in time with even the most unforgiving metronome.

What works so well for Willie, toying with tempo and challenging the rigid laws of music and mathematics, isn’t successful in almost any other endeavor. Proof of which can be found when considering the struggles of the Texas Tech offense over the past seven seasons.

An offense whose success is predicated on precise timing and a fast, but consistent, tempo has been out of tune more times than not since Graham Harrell graduated.

But in only five career starts, Pat Mahomes is showing signs of turning those inconsistencies around. And while there remains plenty of internal consternation and external snark, there is true promise–and reason for optimism–based on the play of the sophomore quarterback.

There are those much more talented than me that will provide breakdowns of individually impressive plays throughout the season, but two in particular stand out to me from last Saturday against Sam Houston State. In the 2nd quarter, Texas Tech was facing 3rd and 7 from their own 47. Sam Houston blitzed from the edge, leaving Ian Sadler open over the middle for an “easy,” 53 yard score. It’s the sort of play that Tech fans got used to during the early 2000’s. Whether it was Kingsbury to Welker, Harrell to Crabtree, or any variation in between, those seemingly easy scores were routine. But they’ve been missing for so long.

Whether it’s a missed read or poorly thrown pass, those “easy,” passes have been absent for years. And this isn’t meant to disparage Potts or Doege or Mayfield, Michael Brewer or Davis Webb. It’s simply meant to celebrate the pocket poise of Pat Mahomes and the presence he displays when knowing that they are sending the house. And it’s meant to celebrate the coolness he displays while making them pay for doing so.

The 2nd play was also late in the 2nd quarter, and by now probably long forgotten. Facing a 2nd and 5 from his own 38, Mahomes took the snap and faced pressure again from the Bearkat defense. Rolling to his right he spotted freshman Ja’Deion High about 25 yards downfield near the Bearkat sideline. Under heavy pursuit, Mahomes was forced to throw the ball on the run, but he wasn’t able to square his shoulders and run toward the line of scrimmage–thereby assuring he’d be able to get the required zip on the ball to reach High. Instead, he had to throw the ball while fully shuffling sideways. And he completed it.

It sounds trivial, but try it for yourself with the kids in the yard. First, start by rolling right and throwing after you’ve been able to square your shoulders and run forward. It’s a fairly easy throw. But then try it while shuffling straight sideways, with no forward momentum. It’s damn near impossible to get any velocity or accuracy on the pass.

So while much attention has been paid to the many other spectacular plays from Mahomes (and rightly so), the two described above give me real hope for the future. There is someone again that can manage the tempo required for success in such a fickle offensive scheme. There is a quarterback again with the skill set necessary to improvise and not get lost in the chaotic flow of a college football game.

Willie Nelson often describes a country song in the simplest of terms. “Three chords and the truth is all you need,” he says. Perhaps Kliff Kingsbury has finally found the quarterback that can simplify things again for Texas Tech. Playing just on the inside of the rules of tempo, surprising us with changes that we didn’t expect.