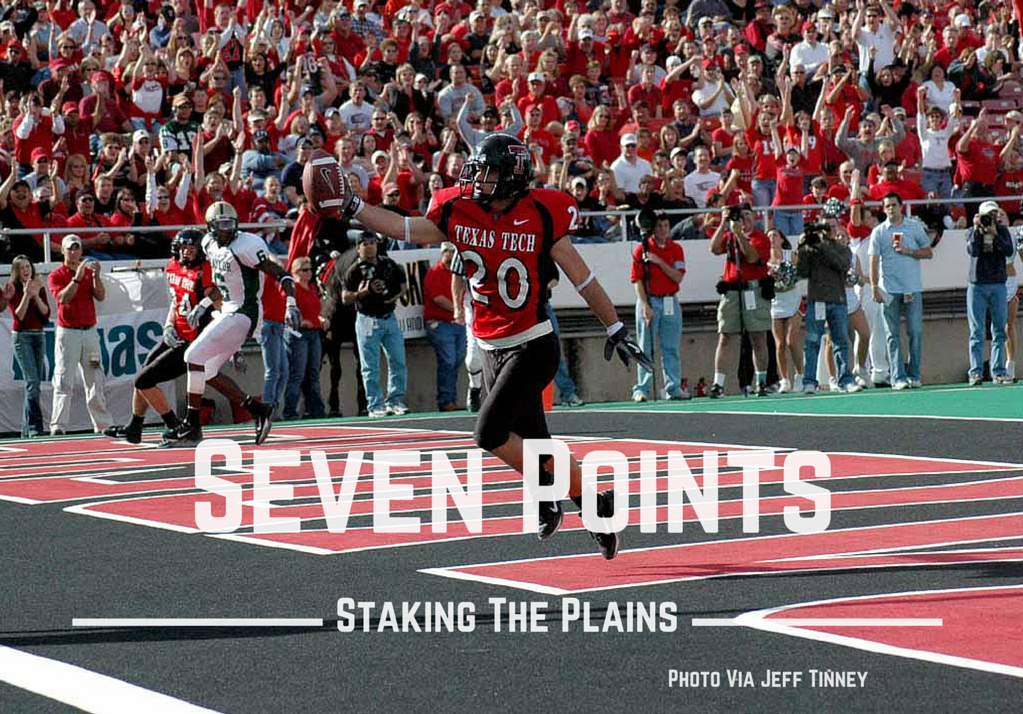 We’ve got our final preview for the game as Texas Tech hosts UTEP, we look at the UTEP offense and defense as well as stats for each team.

If Micah Awe is even slightly injured, then someone (really it will need to be multiple people) is going to have to step up and stop Aaron Jones. If Awe has an injured shoulder, then playing two teams that like to ground-n-pound probably isn’t the best recipe for recovery, which means that Williams, Malik Jenkins and Dakota Allen are all going to have to be really good against UTEP. Williams mentioned during the week that he thought that maybe some of this was butterflies, but that he felt good through the whole game. Physically, I’m sure that Williams is fine, but he and the rest of the linebacking crew are going to have to make simple plays. It sounds strange that this is a defense that, at times, cannot make simple plays, but that’s where this thing is at.

When UTEP head coach Sean Kugler spoke to the media he knew what he was talking about, but he also talked about one of the weaknesses of UTEP when they played Arkansas:

“To be honest with you, they did a lot more play action passing than we anticipated going into the game. They were a heavy, heavy run-oriented team and they had a great game plan. They went hard play action. We’re facing a little bit different cat this week, where you just line up and know they’re throwing and their run game is based off their pass game. It’s a little bit different when you know the passes are coming at you. You’re in man coverage, schematically yes, we can mix in man and zone to alleviate that and give guys help at different times and try not to show pressures. When you do it against a team that you bear down for in the run game and they do heavy play action, sometimes your eyes get lost, especially when you’re a younger guy and a little less experienced. But Arkansas to Texas Tech, it’s like going from a tank to a Ferrari really. It’s just two totally opposite teams.”

Personally, I think that Texas Tech would do very well to mix in a healthy of play action. I’ll be pointing this out in a few minutes, but UTEP bit hard on Arkansas’ play action and I’ll be interested to see how UTEP decides to cover that. Will they bite hard and if they don’t, then that’s where DeAndre Washington and Justin Stockton come into play.

Defensively, I don’t think there’s a lot of secrets about what Texas Tech wants to do, which is just stop Aaron Jones. There are other players that can beat Texas Tech, but Jones is, by far, the most talented. I’d let someone else beat you rather than it be Jones. Hey, don’t get too carried away here, this is a small sample size as each team has played one game and it was a game where UTEP struggled to move the ball against Arkansas. I don’t think that UTEP is as bad as they were against Arkansas and it just sorta unraveled a bit towards the end of the game. Well, don’t these statistics look a little bit funny. UTEP had a problem mustering much of any offense, while the Texas Tech defense looked pretty terrible.

Point 6: A Look at the UTEP Offense

I want to apologize up front for the poor image quality. So we’ll start with the UTEP offense I think this is a pretty standard play for UTEP, they’ve got the guard pulling and ideally, the guard is going to blow up that defensive end, but those Arkansas linebackers see and read this play pretty quickly and they’ll close for a loss of one. This is one of those plays that you all discussed yesterday.  Texas Tech linebackers are going to have to fill the gaps here and make these sorts of plays.

This is a pretty standard man-blocking sort of play and there’s not a lot of fancy things going on here other than the UTEP left guard should not be facing that way and that defender is about to make a spectacular play. The defensive linemen can make plays if they’ll penetrate and beat the offensive linemen here.

This is a pretty typical zone read sort of play and UTEP does eventually hand the ball off here, but I want you to note how the Arkansas defensive line has already created real pressure points in the UTEP offensive line. That left tackle is beat and there’s an Arkansas defender ready to gobble up that play.

This actually ends up being a reverse, where the ball goes to the running back and a receiver pulls around and there is nothing but wide open spaces. I’m guessing, based on this play, that Arkansas was selling out and so this was the perfect bit of misdirection. UTEP did sore here, really pretty easily, but the entire Arkansas line and linebackers were keyed on Jones. The point here being that the Miners will try to throw you off.

Point 7: A Look at the UTEP Defense

When Kugler mentions that Arkansas was selling the play-action hard, they were very much doing that. This is the same play, but you’ve got seven players at or near the line of scrimmage and that means that the Arkansas receivers are one-on-one. UTEP was betting that Arkansas wasn’t going to complete those big plays, but they did. Lots of them. Good for 17 yards per attempt. UTEP will bite, but we’ll see if they really bite on what Texas Tech does or if they’ll just all drop back into zone coverage and wait for Mahomes to make a mistake (this is what I would do).

This is another bit of play action and you’ve got seven UTEP defenders sorta stuck in the no-man’s land. Not really rushing the quarterback and not really ready to stop the run. No pressure. That would be ideal for Texas Tech.

This is the final bit of play action that I’ll demonstrate here, but in this one, you get a better look at how the cornerbacks are playing the receivers, which is from the outside-in, but those safeties are worried about that one intermediate player at the 16 yard line and what ends up happening is that the receiver at the top of your screen and at the bottom are both one-on-one with the quarterback being able to essentially throw the ball up in the general vicinity of the endzone and the cornerback is going to have to come across the top of the offensive player to make a play. That is not easy.

From the highlights I could find, this is Arkansas in shotgun with 10 personnel and as you’ll note, there are much fewer players in or around the line of scrimmage. They’re all dropping off into coverage and this is probably what Mahomes will see on Saturday. Rushing four, maybe five players, and dropping everyone into a zone.