This week, we take a look at a play that was set up in the 2014 matchup between the Red Raiders and the Arkansas Razorbacks

Last year, Kingsbury called a pitch/sweep play in a hurry-up, no-huddle situation right after a big play. The previous play had four wide receivers and the formation was drastically changed, but the personnel remained the same. Jakeem Grant received the pitch from Webb and quickly scampered for a quick and easy 20-yard gain.

I was impressed with it last year (I did one of these posts on it at the other site) and I was more impressed this year. Kingsbury not only took a play call that Arkansas had film on, but a play they used to gain a lot of yards on the against the Razorbacks. He KNEW they would see this coming and he tweaked the play to take advantage of their reactions.

The previous play to this one featured four receivers and one running back. Looking at the formation, it’s not easily apparent that there are four receivers still on the field, in fact it looks like two receivers, two running backs and a tight end. Knowing all this, it is safe to assume that Kingsbury had these two plays called and ready to go before the offense took the field.

Let’s take a look at the formation and personnel used on this play. 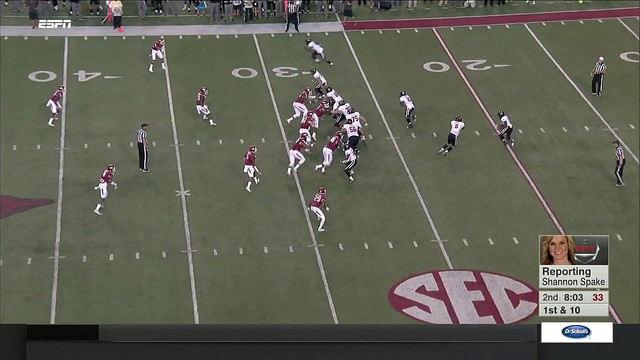 Everybody see the four wide receivers? How about now? 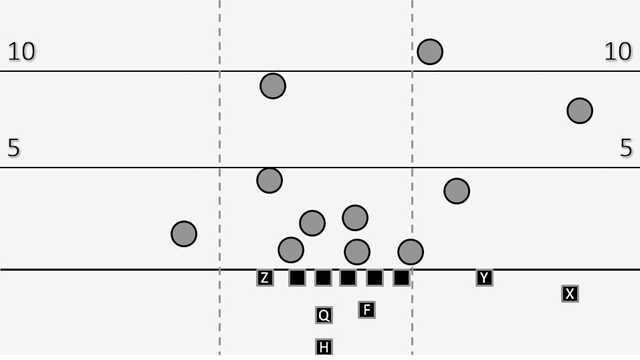 Go back and look at the offensive line. LeRaven Clark is actually lined up to the outside of the right tackle in this play and Devin Lauderdale is lined up on the left side of the offensive line in Clark’s place. You can see this if you go back and look at the jersey numbers on the offensive line. The first number you see is 56, which is Alfredo Morales. You can also see there are three more linemen to Jared Kaster’s right. This is just an excellent packaged play to run, going from four wide receivers to this power pistol look without substituting. 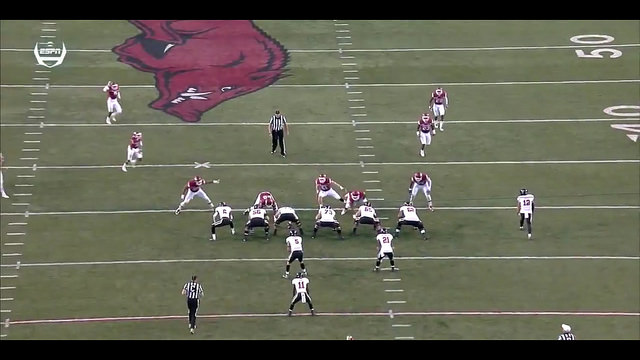 As mentioned above, Tech ran this same sort of concept in the game last year against the Razorbacks. It was a quick, hurry-up no huddle call and the pitch went to Grant who took it up the sideline for 20 yards. Arkansas had that play on film and wasn’t about to let Tech hit another big play (going off of last year’s play, and the previous play which went for 15 yards). Mahomes has the offense set and ready to go so quickly, the Razorback defense is sprinting into position even as the ball is snapped.

After the ball is snapped, Lauderdale holds his ground to protect the back side in case the throw wasn’t there or if it needed a little time to develop. The offensive line was down blocking to their right to get out ahead of Grant, for pass protection in this case. Last year, they had the same movement but got out ahead of Grant to block downfield. 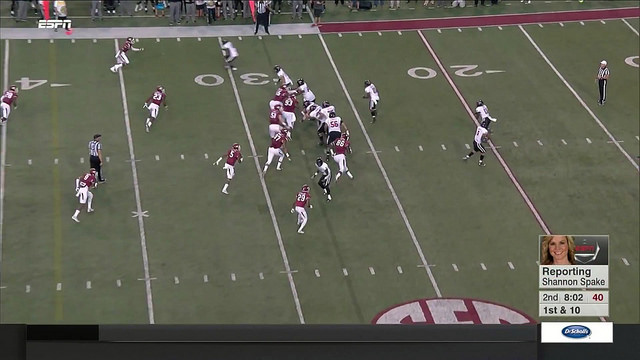 Ian Sadler and DeAndre Washington are leading out in front of Grant as well to block, but it also has the appearance of lead blocking for a run. The entire defense is flowing to the top of the screen with all of their eyes in the backfield on the ever dangerous Grant. 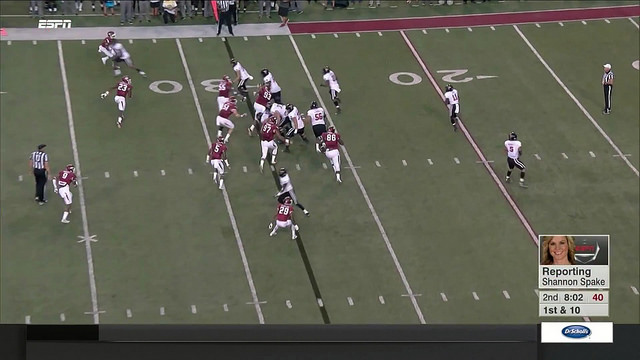 If this were a run, Arkansas had this pretty well sniffed out. But nothing the offense has done up to this point says they’re throwing the ball. You even have Morales pulling as if to lead block. Lauderdale is starting to move downfield, presumably to block the backside safety to cut off pursuit, Sadler is locking in on the next available blocker (which appears to be the defensive back coming across the top, #23). The only thing that says pass here is Reginald Davis blowing past the playside corner back. At this point, it isn’t clear if the corner is picking up on the possibility of a throw. 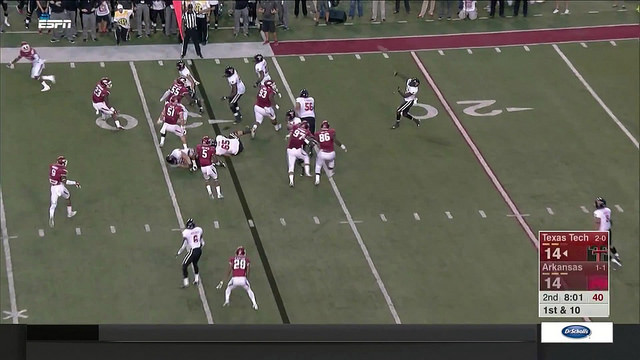 Here, Grant is uncorking the bomb. The corner has the “oh s**t” moment and realizes his man is the intended receiver and is well past him. All of the defense is within 5 yards of the line of scrimmage except for the playside safety, which Davis has beat by 5 yards because he also bit on the run fake. 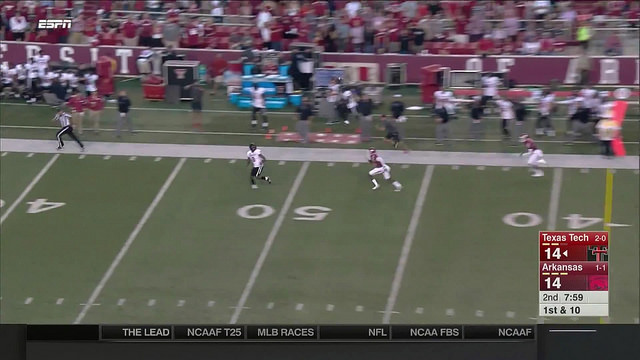 Jakeem Grant has this ball in a perfect spiral, in the air nearly 40 yards, hits Davis almost perfectly in stride and does this all while running to finalize the run action. Davis doesn’t let the open field ahead of him get to him this time and puts it into high gear once he secures the catch to out run the defense for a 72 yard touchdown.

And let’s also give credit to Davis for the subtle moves he put on the defensive backs to get past them.

That move made it appear he was slowing down to absorb the the corner and block him, which had the corner’s eyes lock into the backfield on Jakeem Grant. The safety also noticed this move and started to cut underneath Davis in case he was able to lock up the corner. But all that did was allow Davis to get free behind the defense and score with ease.