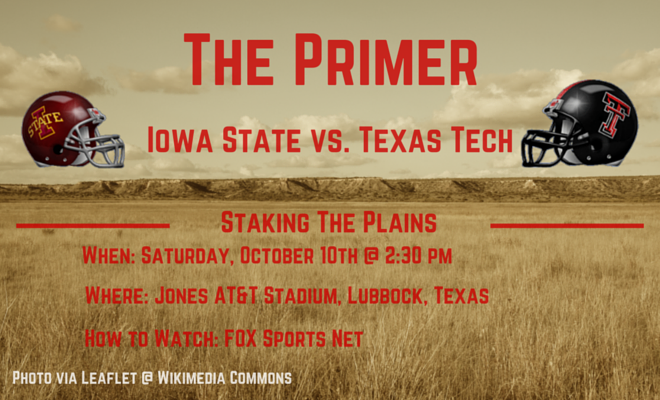 We get you ready as Texas Tech hosts Iowa State, including when, where and how to watch the game as well as key players for the Cyclones.

Last Week: Iowa State manhandled Kansas, 38-13 in Ames on Saturday (ESPN box score). Sam Richardson was very efficient, completing 27 of 37 for nearly 270 yards with 2 touchdowns and 2 picks. I would guess that Iowa State may have found their running back as freshman Mike Warren ran for 175 yards and 2 touchdowns while Allen Lazard grabbed 6 passes for 75 yards and a touchdown as well. The defense for ISU was terrific, holding Kansas to 38 total yards rushing and 250 yards through the air.

What’s at Stake: Iowa State won their first game out of the gate, beating Northern Iowa 31-7. The Cyclones then lost to Iowa, 31-17, and then lost to Toledo, 30-23, which is a bit odd as this was a common opponent of Arkansas and also beat Arkansas, but that game was much closer. Iowa State’s 4th game was against Kansas, see above, and as a result, the Cyclones are 2-2, 1-0 on the season, including their first conference win against Kansas.

Miscellaneous: I do think that ISU is starting to figure things out, especially offensively and with the emergence of Warren. He’s helped a ton the last two games as ISU has run for over 200 yards the last two games . . . freshman DB Brian Peavy is your leading tackler at 27, while LB’s Jordan Harris and Jarnor Jones are at 26 and 25 respectively . . . Peavy is also your leading defender in the defensive backfield with 5 pass break-ups thus far this year . . . this is the start of a pretty rough stretch for Iowa State as they play at Texas Tech, then TCU and then go to Baylor . . . Allen Lazard is your leading receiver and he is a big-bodied receiver, 6-5/220 or thereabouts. He’s averaging about 5 catches a game and nearly 11 yards per catch. He’s more possession oriented, but he’s really good. Dondre Daley is your second leading receiver at 18 catches, but just 149 yards per game and appears to be a safety valve more than anything else, while D’Vario Montgomery and Jauan wesley are your deep threats . . .