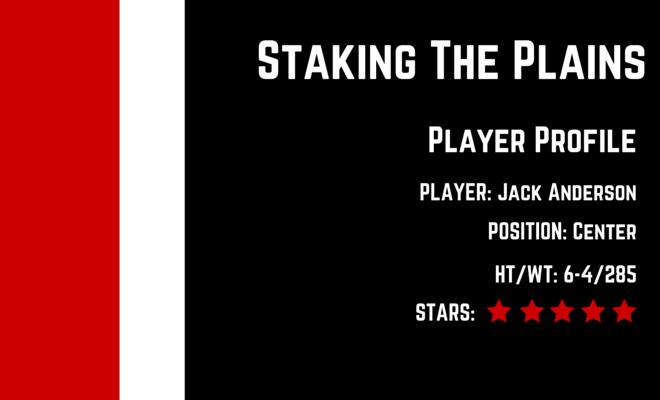 We’ve got links, video and analysis of 2017 C Jack Anderson after his commitment to Texas Tech.

The Player Speaks: There’s not anything out there that’s free, but goodness, did the recruiting services know about how this might happen as they seemed ready to go with their stories. Anderson has been a Red Raider his entire life as his father was also a Red Raider. This was personal with Anderson and I think it will remain that way. Heck, there’s the thought that Eric Morris just named his son after Anderson.

Scouting Report: Anderson is aggressive and strong and lean. It’s funny to see a player so lean with so much strength and ability. Anderson is projected as a center and you want your centers to have a command of the line of scrimmage. Unfortunately, we don’t get a great look at that with the sophomore video, so it’s tough to rule on that. What does make him a great prospect at center is the fact that he is really fast in space, it’s almost scary how quick he is and how quickly he blows opponents off the line of scrimmage. Again, the competition isn’t great and you can see that with some of these players that Anderson is going up against. Anderson hardly ever has any video of a pass block, and so the Frisco offense is probably generally a running offense, but when Frisco does pass, you can tell Anderson has a wide base. Physically, Anderson isn’t a huge player in the traditional sense, which does make him an ideal center. At 285, that’s a big center for a college program and you could see him filling out at 300 and not losing a step at all.

Oh, and the YouTube clip is Anderson matching up against Rashard Lawrence, a 2016 5-star defensive tackle that went to LSU. Anderson is playing guys a year ahead of him and he’s as strong as anyone on the field.

We’re changing this up a bit this time since Anderson is a Red Raider.

Jack, welcome home and welcome back to Texas Tech and Git Your Guns Up!