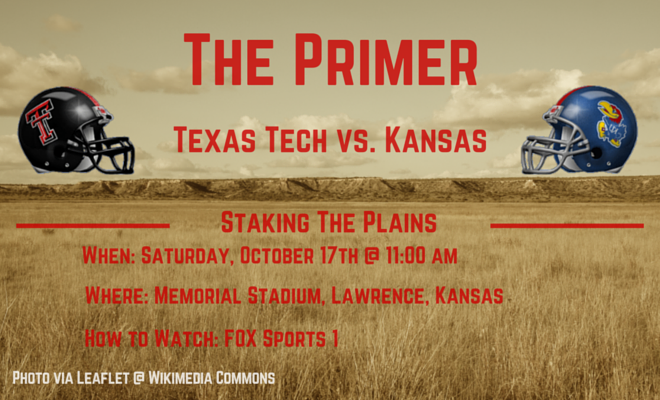 We take our first look at the Kansas Jayhawks, including when, where and how to watch the game, key players and thoughts about KU.

Last Week: Kansas lost to Baylor, 66-7 (ESPN box score). The Kansas offense managed about 230 yards of total offense on the day and allowed over 640 yards on defense. Taylor Cox led the team with 19 carries and 45 yards, while Willis’ day is detailed below. He did throw his touchdown to Steven Sims, Jr., and that was his only catch of the day. It didn’t help that Kansas lost two fumbles and Willis threw an interception.

What’s at Stake: Kansas has lost all five games thus far, to South Dakota State (which was close, 41-38), Memphis, Rutgers, Iowa State and Baylor. The SDSU and Rutgers games didn’t appear to be complete blowouts, but it’s hard to tell with just looking at the final score. It’s a rough stretch for Kansas as they’ll face Texas Tech this week, and then go on to play Oklahoma State, Oklahoma, Texas and then TCU. That’s a fun stretch. Texas Tech looks to move to 2-2 in the Big 12 and so this Kansas game is important for the team and to stay in the middle of the conference race.

Miscellaneous: It seems all too obvious as to how this game should play out. Kansas averages only 19 points a game while allowing over 45 . . . The offense only has 650 yards of rushing on the year and only 1,142 yards passing . . . The defense has been rough as well, allowing 556 yards a game (hey, don’t laugh, Texas Tech isn’t far behind), 257 yards on the ground and 300 yards in the air . . . When Parmalee was healthy, Kansas did run the ball and they ran it quite well, gaining 285 yards against South Dakota State and 194 yards against Memphis. I guess the point here is don’t sleep on that rushing attack . . . One of the biggest issues with Kansas is their inability to convert inside the redzone as they are 103rd on offense . . .