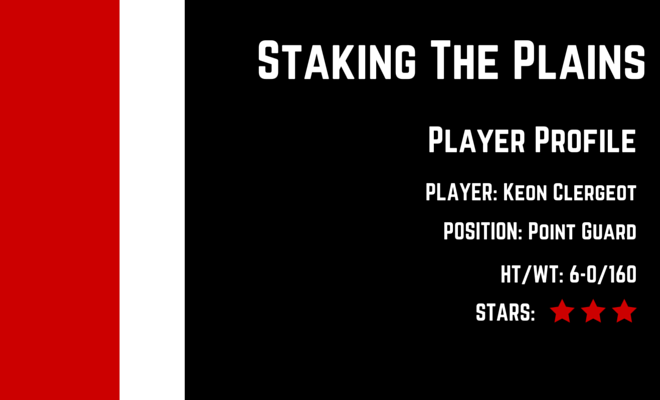 Texas Tech and Tubby Smith added their first commitment of the 2016 class in Florida’s Keon Clergeot.

Not only that, but with the volume of players, it’s a fine line between a guy that is offered by Hofstra and a guy that ends up committing to Texas Tech. If Clergeot plays in Texas and is at or near 6’0″ and averages 26 points a game, then he’s getting more than mid-major offers.

In any event, Clergeot was also considering Wichita State, which I consider to be a good thing and via Kansas:

“I like their up-tempo offense,” he said. “The way Fred VanVleet plays, the way he runs a team, I can do the same things.”

Clergeot averaged 26 points, according to the Lakeland (Fla.) Ledger and earned All-County honors. HoopSeen.com ranks him No. 18 in the Class of 2016 in Florida.

That’s pretty good, to average 26 points a game and his head coach says that no one can stay in front of him:

“I haven’t really seen anybody that can stay in front of him,” Auburndale coach Eric Robinson said. “He’s really developed his jump shot and extended out to three-point range.”

Scouting Report: Clergeot is a driving machine. He’ll take the ball to the hoop and he’s got an array of moves when he gets to the basket. The thing tht I always worry about with smaller guards is how a player can make that translate in the Big 12, i.e. can they make themselves better to the point they can get their shot off against the bigger players. That’s usually something that you have to wait to see, but he does take the ball to the basket.

If I had to guess, I’d think that his biggest weakness is his outside shot, but that’s pretty typical. From the limited shots that we can see, he’s got decent form and there doesn’t appear to be any hitches and that’s always something that I look for.

Keon, welcome to Texas Tech and Git Your Guns Up!