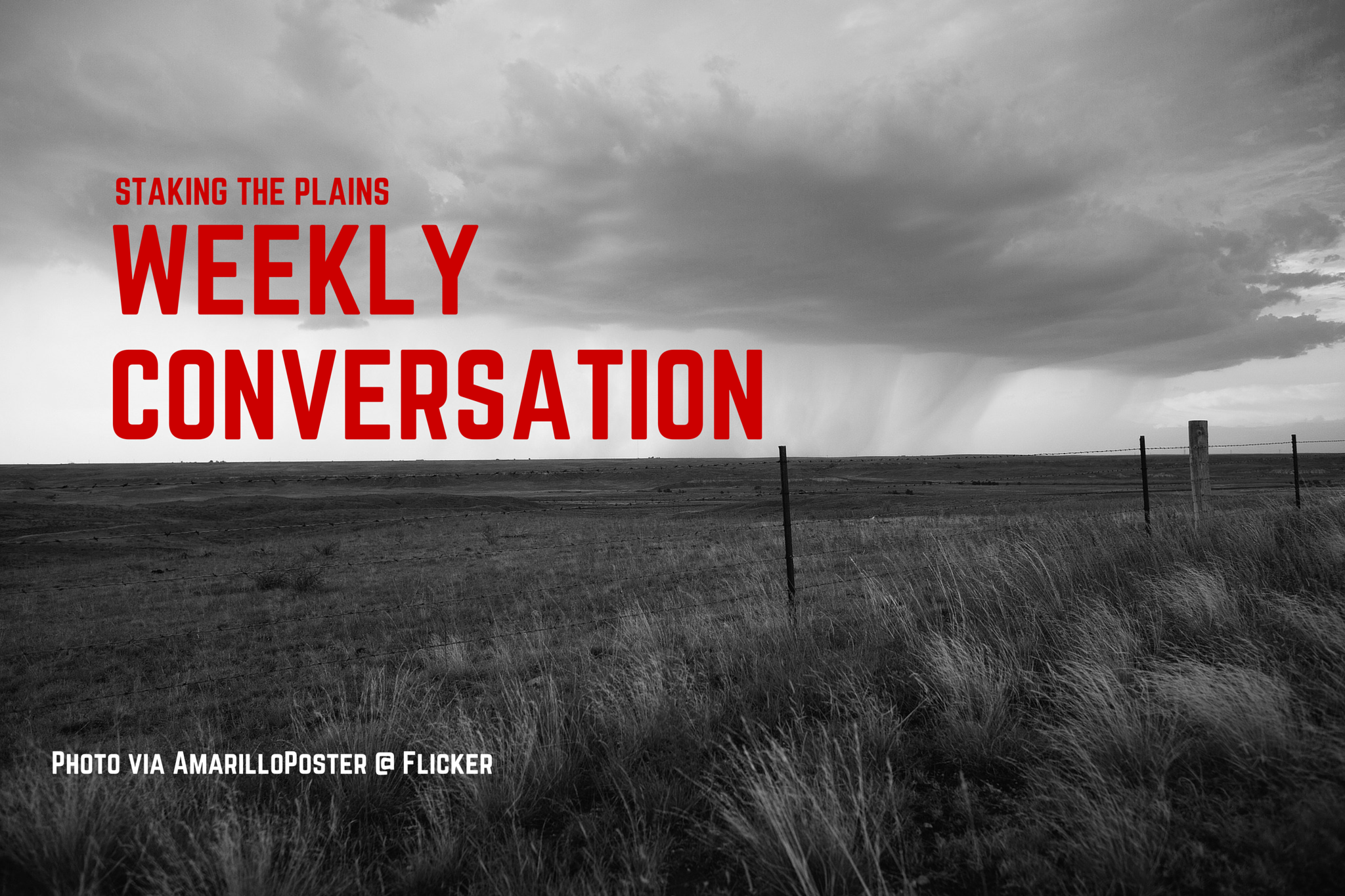 Seth: It sounds like your trip to Lubbock and Texas Tech for the game was everything you wanted it to be and more.

Travis: Yes, and it always is. It’s just such a special place for me, beyond my ties to Texas Tech even. Many of my closest friends still live there– the kind friends you can go years without seeing and pick up right where you last left off when you walk in the door.

And all the people are so great. Down to earth, unassuming, nice people.

In my Tuesday post I actually had a couple of paragraphs about the game but decided to scrap them and just focus on what the area means to me.

As for the team, there seems to be a certain level of calm around the program right now. Perhaps that’s the stability instilled by the coaching staff or maybe it’s just a lot of Patrick Mahomes, but there seems to be a quiet confidence on campus right now. There wasn’t one minute on Saturday that I ever thought Tech wouldn’t win the game. It’s been a loonnnggggg time since I’ve felt like that. I guess Brian’s haikus are more powerful than we thought.

So I was being driven around town by a guy named Jack and wailing away on a guitar with broken strings for most of the weekend and missed out on the commentary around here. Did everyone else get the same sense that I did?

Seth: Yeah, I think so. There was some disappointment when the offense didn’t convert on every opportunity that they had (how dare they) but I think that’s a direct shock as a result of playing Baylor and TCU who score on every opportunity. You feel like you’re going to get behind, but most teams just aren’t as efficient as those two teams. And quite frankly, Texas Tech is actually incredibly efficient at scoring and third downs, one of the best in the nation.

And there was hand-wringing about the defense because, well, you know. That’s all to be expected with Texas Tech fans, so nothing out of the ordinary (and I write all of these things because we all have high expectations for the offense and that’s just the way it is).

In my post-game write up of the game, it seemed clear that the top two spots right now are reserved for TCU and Baylor and the bottom two spots are reserved for Iowa State and Kansas. It’s the middle part that’s been incredibly tough to figure out, especially with Oklahoma State having not lost a game, Oklahoma losing to Texas, and Kansas State taking TCU down to the absolute wire. How would you rank the middle of the conference?

Really, I think 3 through 8 is going to be very interesting to watch play out. Texas showed themselves to be if not legit, at least serviceable and somewhat dangerous. And on the flip side OU came back down to earth after a quick start, and some of their weaknesses were exposed. I heard Chris Level comparing OSU to Tech in 2013– undefeated with the toughest part of their schedule to come, which I think has some merit. So I think Tech is in a position to finish anywhere from 3rd to 8th, and it’s gonna be an exciting second half of the season to be sure.

Here’s a question for you- do you love any movie as much as I love Rocky III or even Rocky IV?

Seth: I cannot think of a singular movie that I absolutely love. Yes, that’s a correct statement for me, I can’t think of a singular movie that makes me stop down or one that I feel great about watching. My favorite movies of all time are Band of Brothers, and yes, I realize this is a mini-series, but it is something that I own. I also love A River Runs Through It, partly because the scenery makes the movie and that life is what I want out of retirement (the fly fishing part, not the excessive drinking and gambling). A mountain, a stream and fishing with my kids.

There are two quotes from that movie that have always stuck with me:

“Eventually, all things merge into one, and a river runs through it. The river was cut by the world’s great flood and runs over rocks from the basement of time. On some of the rocks are timeless raindrops. Under the rocks are the words, and some of the words are theirs. I am haunted by waters.”

“Each one of us here today will at one time in our lives look upon a loved one who is in need and ask the same question: We are willing to help, Lord, but what, if anything, is needed? For it is true we can seldom help those closest to us. Either we don’t know what part of ourselves to give or, more often than not, the part we have to give is not wanted. And so it is those we live with and should know who elude us. But we can still love them – we can love completely without complete understanding.”

This movie is based on a short story from Jim Harrison and he is my favorite American author (yes, he’s surpassed Hemingway for me). The latter quote is one that makes me think about my family, and I’m assuming that all of us have that family member (or friends of person in our life) that is sometimes hard to reach and we really don’t know what to do to make it better, if that’s even possible. My general philosophy in life is to love the heck out of everyone and hope I’ve done my best and that seems to fit here.

What is it about the Rocky movies that mean so much to you? I think I know, but I’d guess that some folks might think that it’s a joke and your love for those movies is anything but a joke.

Travis: There are a couple of reasons for it. For those newer readers, you can read the long version here.

The tl;dr version is broken into three parts: For one, Stallone’s personal story has always inspired me. He wrote the screenplay for Rocky in three days, convinced the studio to make the movie and then to let him star in it, and won the Academy Award for best picture in 1976. It’s always just been one of those things I think about when trying to reach my own goals.

And second, the movies were sort of a crutch for me growing up. My parents divorced when I was in 6th grade and we had a pretty topsy-turvy upbringing. But no matter what was going on, I could always lose myself in Rocky movies.

And third, I find humor in the model that Stallone has been so successful with. Rocky is doing good, somebody dies, Rocky stares in the mirror and thinks about the person that died, he doesn’t train hard, Adrian gives him the business, he trains hard and whoops ass.

So how do you see this weekend playing out? I hate 11am games…

Seth: Pretty sure Texas Tech is going to be flexing.

What about you? Maybe more importantly, how do you think the defense is going to do.

Travis: Oh, the defense is gonna do some stuff. Early morning stuff.