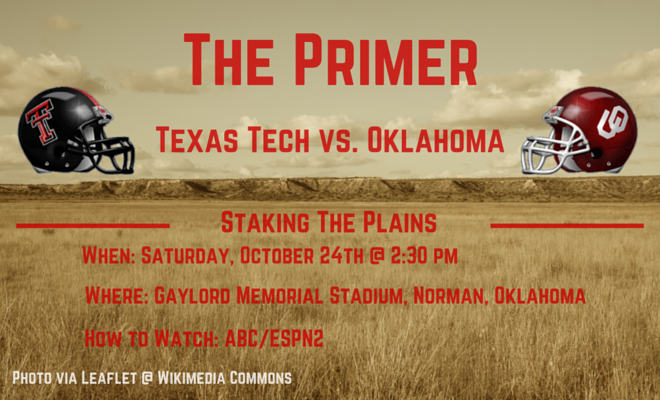 We tell you when, where and how to watch Saturday’s game against the Sooners as well as odds, key players and what’s at stake.

Last Week: I did not see this on the horizon as Oklahoma throttled Kansas State, 55-0 (ESPN box score). Coming off of what looks like a terrible loss to Texas, Oklahoma whipped up on Kansas State in every way possible. The Wildcats were held to 110 yards total. Yes, total, while Baker Mayfield was terrific, completing 20 of 27 for 282 yards and 5 touchdowns.

What’s at Stake: For Oklahoma, the Sooners are looking to move to 3-1 in conference play, after having beat West Virginia fairly easily, then losing to Texas by 7 and then putting the hurt on Kansas State. For Texas Tech, this is one of those games that’s probably been circled for a while as Baker Mayfield guides the Sooners. I would guess that some Red Raiders would like to see a win because it’s him, but truthfully, Texas Tech should want a win for reasons not at all related to Mayfield, but more because this team needs another quality win (this presumes that the Arkansas win is a quality win as they sit 2-5, but do have a win over Tennessee).

Miscellaneous: The offense has been very good thus far, moving up to 18th overall in total offense and 13th in scoring offense . . . although I would guess that some fans are probably disappointed that the Sooners are only 82nd in rushing offense . . the defense has been very good, despite allowing Texas to run a bit on them, the Sooners are still only allowing 321 yards a game, good for 23rd overall . . .