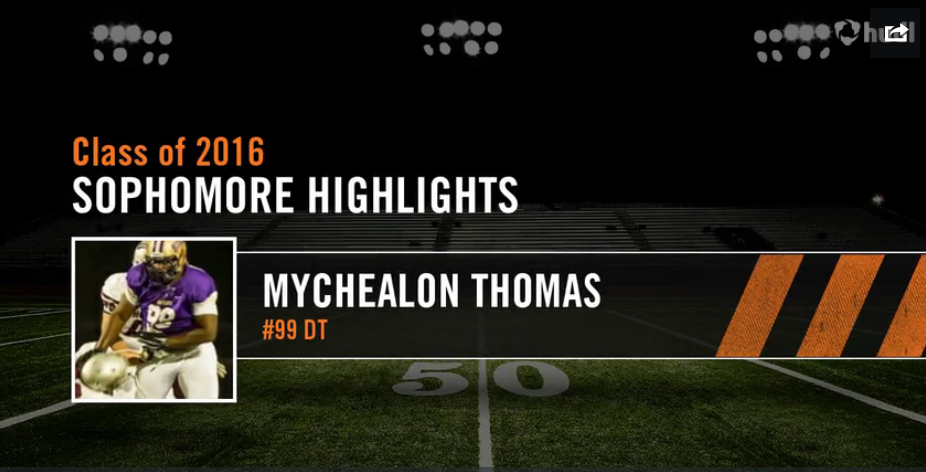 2016 defensive tackle commit Mychealon Thomas (6-1/324) released his sophomore highlights at Butler C.C. This is important because we really haven’t seen a ton from Thomas, mainly just his high school tape from Skyline.

Thomas plays from the noseguard position to defensive end at times, although he is mainly a 3 technique tackle. Thomas has excellent pursuit, runs down the quarterback a handful of times from behind the line of scrimmage. When he plays the 1 technique, he does an excellent job of shedding his block and making a pretty good play. When he is blocked, he moves quickly to make the play, at least when needed. He doesn’t stay in one spot and he uses his hands quite well to make the play. He also does a terrific job of penetrating the offensive line when called to do so.

Via NJCAA, Thomas has 39 tackles on the year, including 4 sacks. And to give you a bit of context, Butler only allows 130 yards a game. Thomas was also voted as a second team all-conference in the Jayhawk Conference.

I think we’re just talking about a good piece to the puzzle here, hopefully a very good piece to the puzzle. I am a bit burned by the idea a JUCO can come in an compete, but that’s stereotyping and blanket statements like this don’t take into account the player.  The hope is that Thomas will be a role player to give some much needed depth and rest to the rest of the defensive line. It seems like the last half of the season, it was Breiden Fehoko and Demetrius Alston and that was it.  Hardly any time for any back-ups.