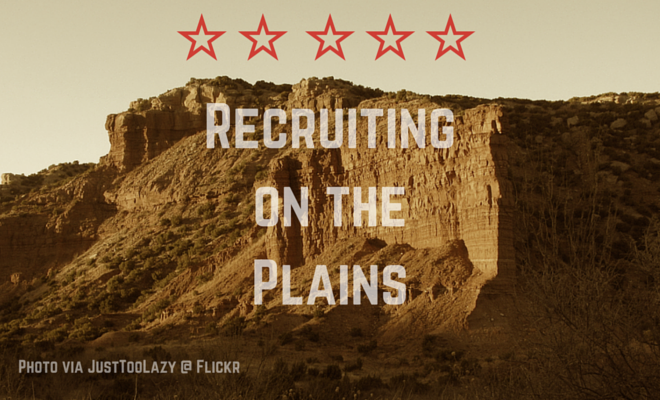 Let’s look at the Texas Tech 2016 class on offense as it stands today.

With National Signing Day right around the corner, I wanted to take a closer look at the current 2016 class. Of course, things are subject to change, but how have these players performed this year and how do they fit together as a group? That’s what I’m looking for. Lots of these players were recruited and committed before any of them really had many significant offers. Once they committed, the offers stopped (Jett Duffey is a perfect example of this) so the offer list isn’t as telling as it is in other years.

Quarterback:
QB Jett Duffey (6-1/175): Jett Duffey has had an incredible year for Mansfield Lake Ridge. He’s thrown for 2,687 yards, 29 touchdowns and 5 interceptions this year, not throwing a pick until very late in the year. Lake Ridge is 15-0 this year, largely because their offense is incredibly tough to defend with Duffey and running back Duke Carter, who’s run for nearly 2,000 yards. The thing that I didn’t realize about Duffey is that he’s a true dual threat quarterback. He does both very well. Duffey has run for nearly 1,700 yards and 19 touchdowns on the year.

I think that maybe there is a shift for Kingsbury here, from the big-armed sort of quarterback to one that is as good on his feet as he is with his arm. Xavier Martin is the same way. The offense is going to evolve right before your eyes.

Running Back:
RB Da’Leon Ward (5-11/180): Ward finished with 1,929 yards and 20 touchdowns on the year on 228 carries, which is about 8 yards a carry. Ward was the workhorse for Skyline this year and they leaned on him each and every game. Ward is a bit bigger than the typical Texas Tech back, he’s nearly six foot, coming in at 5’11” and weighing 180 pounds. This is a very similar body-type to Corey Dauphine and I’m wondering if we were about to witness a shift here as well. Don’t get me wrong, there’s not a huge difference between 5’9″ and 5’11”, but it prior to that, Texas Tech had recruited Demarcus Felton, who is 5’7″ and Justin Stockton, who is 5’10”. More than likely, the staff is recruiting the most productive runner, but thought the difference in height was a bit different.

Receiver:
WR Antoine Cox-Wesley (6-4/180): Cox-Wesley doesn’t have the best stats, but I think we all know that this is one of those Mike Jinks commits, he knows the coaches there and knows the coaches and knows what type of athlete he is. On the year, Cox-Wesley had 45 catches for 663 yards, nearly 15 yards a catch, for 10 touchdowns. Last year, he was more of a deep threat, averaging nearly 20 yards a catch, but in watching some of the Ciblolo game, he’s definitely learned to be more of a possession receiver. He’s still really raw athletically and given his prowess in the long jump, I think Texas Tech coaches are hoping that they have an athlete that’s going to be projectable in the long term.

IR Bryson Denley (5-10/175): Denely is much more running back than he is receiver, although Cibolo certainly reduced his touches as a running back this year. Denley had 111 carries for 989 yards, which is good for 76 yards a game and nearly 9 carries a game, along with 17 touchdowns. Denley had 13 catches for 134 yards and a touchdown. I think Denley essentially split time at running back with other runners (Travell Lumpkin, who had over 1,000 yards running for Ciblo as well). Denley has excellent size and his Hudl page is set to private, but from what I can tell, Denley is a good athlete who should be able to make the transition nicely to receiver. I think he could be a lot like Bradley Marquez. Denley is about an inch shorter, but I think if you were to make a comparison, this would be it.

WR De’Quan Bowman (5-11/180): I think Bowman is going to be in the mix for an inside receiver spot, but I think some things are going to shake down between signing day and now. On Friday of last week, someone asked Chris Level about if Devin Lauderdale would take the next step next year (or something like that) and his response was pretty candid in that he said that he wasn’t sure if Lauderdale would even be on the team. If that’s the case, then does Bowman automatically slide into the X-receiver spot? I’m sure some of the freshmen would like a choice in the matter, namely Tony Brown or Keke Coutee (maybe Coute) competing at that spot. As far as Bowman is concerned, he’s really inconsistent, but when he’s on it, he’s on it. He finished the year with 50 catches and 770 yards with 5 touchdowns, which is good for 70 yards a game and 15 yards a catch. In his last four games, he had 6 catches for 60 yards, 1 catch for 18 yards, 6 catches for 189 and 1 catch for 10 yards. Now, the last game, 1 catch for 10 yards, they won 47-0.

WR Derrick Willies (6-4/210): Willies is the big question mark. Not in terms of his talet, but in terms of if he will sign with Texas Tech. Adding Willies to the mix of Dylan Cantrell and Reginald Davis could push the two of them to different positions. Willies finished with 49 catches for 1,155 yards and 14 touchdowns, which comes out to 115 yards a game and 24 yards a catch. Hanging onto Willies is a big deal. You probably won’t know until the day that JUCO’s can sign here in December.

WR T.J. Vasher (6-5/185): Vasher is the cap towards the taller receivers. He towers over defenders and he’s a ridiculous in terms of going up to get the ball. Vasher finished with 1,071 yards on 55 catches for 9 touchdowns. That’s 97 yards a game and 20 yards a catch. Willies, Cox-Wesley and Vasher all potentially offer tremendous size on the outside (assuming they don’t get moved back inside and that’s a joke, I hope he stays outside. Vasher could also play basketball. He’s incredibly athletic and talented.

I sorta wanted to write about these guys as a group. Largely, how their high school teams ended their years isn’t as dependent on them as the skill positions. I definitely get the idea that these are “Lee Hays’ Guys” meaning that I think that he’s responsible for finding and recruiting these guys. They are more under the radar than the class from last year, which had several top 100 players (Ellison, Akamnonu, and Dyer) while this group is much less touted. That’s not always an indication of talent and I’ve always been happy with how Hays has coached up his group. Heck, Justin Murphy was a pretty average 3-star and we found out how important he was to the offensive line last year.

Conclusion:
It appears that the strength of this group is the skill positions. I’d also add that this also appears that the coaches identified very early who they want and as long as these guys stick with their commitments, the staff is going to stick with their commitments. The coaching staff was out on these guys pretty early. The receivers really are probably the best of the group, but after seeing Duffey on the TV, he’s a heck of an athlete and very talented. He’s a talented runner and he’s a talented passer, I just didn’t get to see as much. And Ward is really is as good as a running back that Texas Tech has recruited.

The one interesting thing is that Texas Tech felt that they needed an immediate shot in the arm with the receivers. This is coming off of recruiting six last year (only five made it to campus). I think their evaluation was correct.