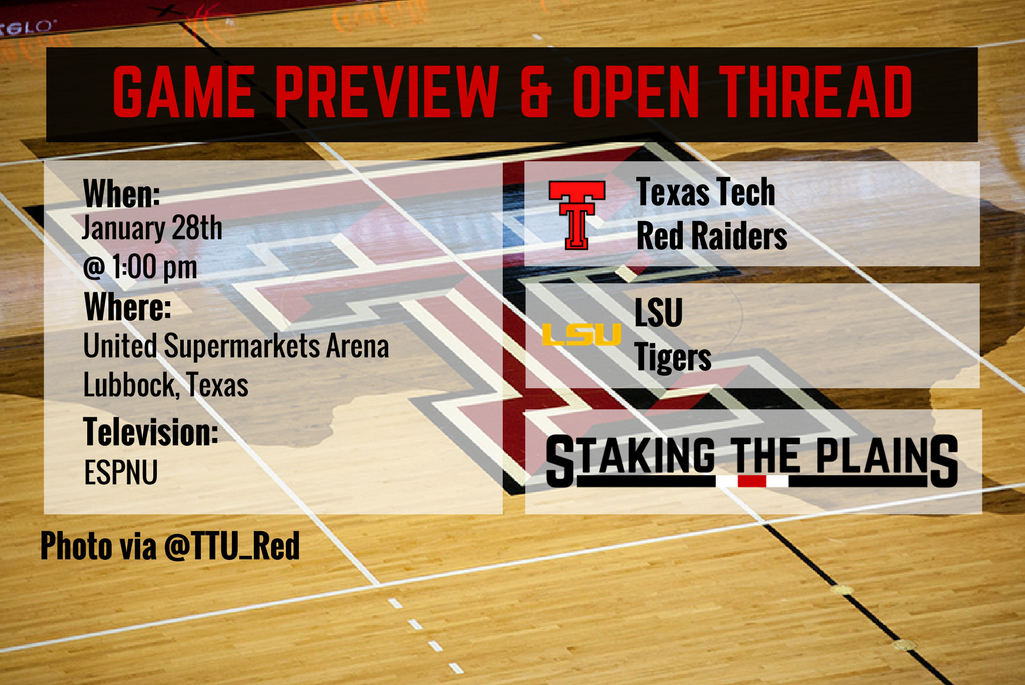 The Red Raiders host LSU as part of the Big 12-SEC Challenge.

1. KenPom LSU is ranked 156th in the nation, 85th in AdjO and 242nd in AdjD. Texas Tech comes in at 40th overall, 34th in AdjO and 74th in AdjD. I am guessing that LSU will be the lowest rated opponent for the rest of the way out on the schedule.

2. LSU has had a rough go at it, losing their past six straight against SEC opponents, the only win coming against Missouri (that’s a whole other discussion). LSU played Auburn close on the road, but it appears that they just give up way too many points, averaging over 91 points in those last six games. That’s a ton for the SEC. And Johnny Jones is only in his second year (I think) and the program is really a shell of it’s former self, especially without Ben Simmons. The one good thing is that Skylar Mays, the younger brother of Stan Mays, who was a walk-on at Texas Tech, is currently on LSU’s roster and as a true freshman, he’s averaging 4 assists a game, which is pretty good.

3. Reath is the best shooter on the team, making 54% of his shots, but he’s a liability on the free throw line. Blakeney is a very solid player, but he doesn’t pass the ball very much while Sampson is another good player, but just doesn’t share the ball. Statistically, Texas Tech is the superior program except in offensive rebounds, defensive rebounds, blocks and steals. Control the boards and Texas Tech will control the game, I think.

4. More than anything, I’d love to see a couple of guys click together offensively for Texas Tech. It seems as if it’s been a bit disjointed offensively and I’d love for the big three or four to have big games offensively. I really shouldn’t even be thinking about offense and really, I think the defense needs a good showing against a team that’s not great offensively.

“I’m not into moral victories especially with a team that has five seniors and six juniors,” Texas Tech head coach Chris Beard said. “We did some good things in Waco, but we didn’t get the job done. My expectations are to win every game. It terms of effort, that’s a given. I tell guys when I’m recruiting that I don’t coach effort. We try to coach basketball and to build better players. Effort is just a given. We haven’t had one possession this year that our guys aren’t playing hard, our guys play hard. We have individual possessions where one player will take a play of. In basketball especially when you have a small margin of error like we do on this year’s team, that was the problem in the Oklahoma State game. We had guys who were playing hard, competing and that wanted to win, but we would have one guy take a play off. Another possession another guy would take a play off, and you can’t do that. We had more consistency in Waco. We had five guys playing hard each possession. That’s why we played well.”

Coach Beard addresses the media before the #RedRaiders host LSU on Saturday. #WreckEm #4to1 pic.twitter.com/hptGyx5RnL