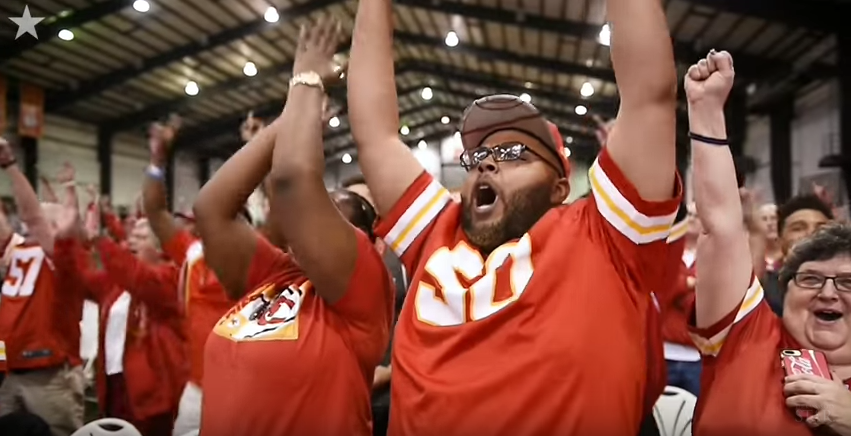 Whoa! Pretty big and special night for Patrick Mahomes and Texas Tech football. Patrick was selected 10th overall in the 2017 NFL Draft, the Kansas City Chiefs moving up to pick their franchise quarterback of the future. Mahomes was in Tyler at a restaurant in Tyler, Texas.

The “call” to @PatrickMahomes5. pic.twitter.com/lPHaP1Sesj

The KC Star has some videos for you to check out.

I’m including this tweet because this was the moment that the Mahomes’ team knew that he was getting drafted by the Chiefs. ETSN’s Mike Graham, a former Red Raider himself, was in Tyler. Mahomes said that getting picked was a relief:

“It is a relief,” Mahomes said among 200 friends and family members at the Lago del Pino restaurant in Tyler. “When you watch the NFL Draft as you grow up, you see the first round and you see those top picks. You want to be one of those guys, so you just set one of those goals to be picked high like that. This is awesome.”

There’s also lots of quotes from head coach Kliff Kingsbury, who said that Mahomes going to Kansas City and Andy Reid is a terrific thing for Mahomes and Kingsbury hopes that the selection of Mahomes leads to some great recruiting:

Kingsbury was obviously very proud of his young protege.

How bout them apples?

KC Star’s Sam Mellinger writes that the Chiefs made a spectacular, smart and potentially franchise-shifting pick in Mahomes:

This fits Dorsey’s tendency to address needs at least a year early, and gives the Chiefs their best chance to upgrade from solid to great at the one position that impacts more than any other. A year from now, if the Chiefs are confident in Mahomes, they can save $17 million in cap space by cutting Smith. If not, they can renegotiate Smith’s deal.

It’s a risk, but that’s true of any pick. This is an aggressive risk, taking the guy they like more than the national champion Deshaun Watson, the one move that provides more potential profit for the Chiefs than anything else they could have done on Thursday.

“Right now Patrick isn’t absolutely ready to play — he’s got some work to do,” Reid said. “He’s going into a great room … he can learn from Alex. We have to be patient with him. Tremendous upside. Good person, intelligent with great skill.

“We think they’re both really good football players. We just thought we with what we do, Mahomes would fit in well.”

“Very seldom do you have a perfect pocket … in the National Football League,” Reid said. “And we thought he did that well.”

CBS Sports gave the pick for KC a B+:

Alex Smith is still Alex Smith, so the Chiefs needed a quarterback of the future, one who is capable of doing more than simply managing the game. They might’ve found that guy in Patrick Mahomes. Mahomes comes from Texas Tech’s spread system, which is one of the biggest knocks against him, but he arguably features the most upside in this year’s draft. He has a strong arm, tremendous playmaking ability, makes a ton of big plays, and can throw from a variety of platforms. In his final season at Texas Tech, he completed 65.7 percent of his passes for 5,052 yards (8.5 YPA), 41 touchdowns, and 10 interceptions. He’ll need to put in the work to transition to an NFL offense — his mechanics need refinement — but the upside is clearly there. He’s the anti-Alex Smith.

In case you missed it from yesterday, Mahomes wrote a letter to the NFL for the Player’s Tribune:

I’m not perfect. But football isn’t always perfect. It doesn’t always go the way you expect. I know that I might not have given the perfect answer for every one of your questions. You saw some mistakes on my tape, and I missed a couple of throws on pro day.

But I hope you noticed that every answer I gave was sincere. And that when I made a mistake on the field, I always held myself accountable. I hope you realized that I can do a lot more than just throw the ball far. I don’t want you to think that a big arm is the only thing that got me here. I’m a football player. And I’m ready to do the job as your quarterback.

The only thing on my mind is helping you win games, whatever it takes. I’ve been thinking about playing in this league since I was a little kid. And now here we are on the eve of the NFL draft.

I’m ready to show the world what I’m capable of.

And last, but certainly not least, LAJ’s Don Williams

So was Mahomes. “Pure excitement” is how the two-time FBS total offense leader described the moment.

“I knew there was a chance,” Mahomes said. “You never know on draft day, but I was extremely excited when it happened.”

Oh, and this was a screenshot from one of the KC Star videos.