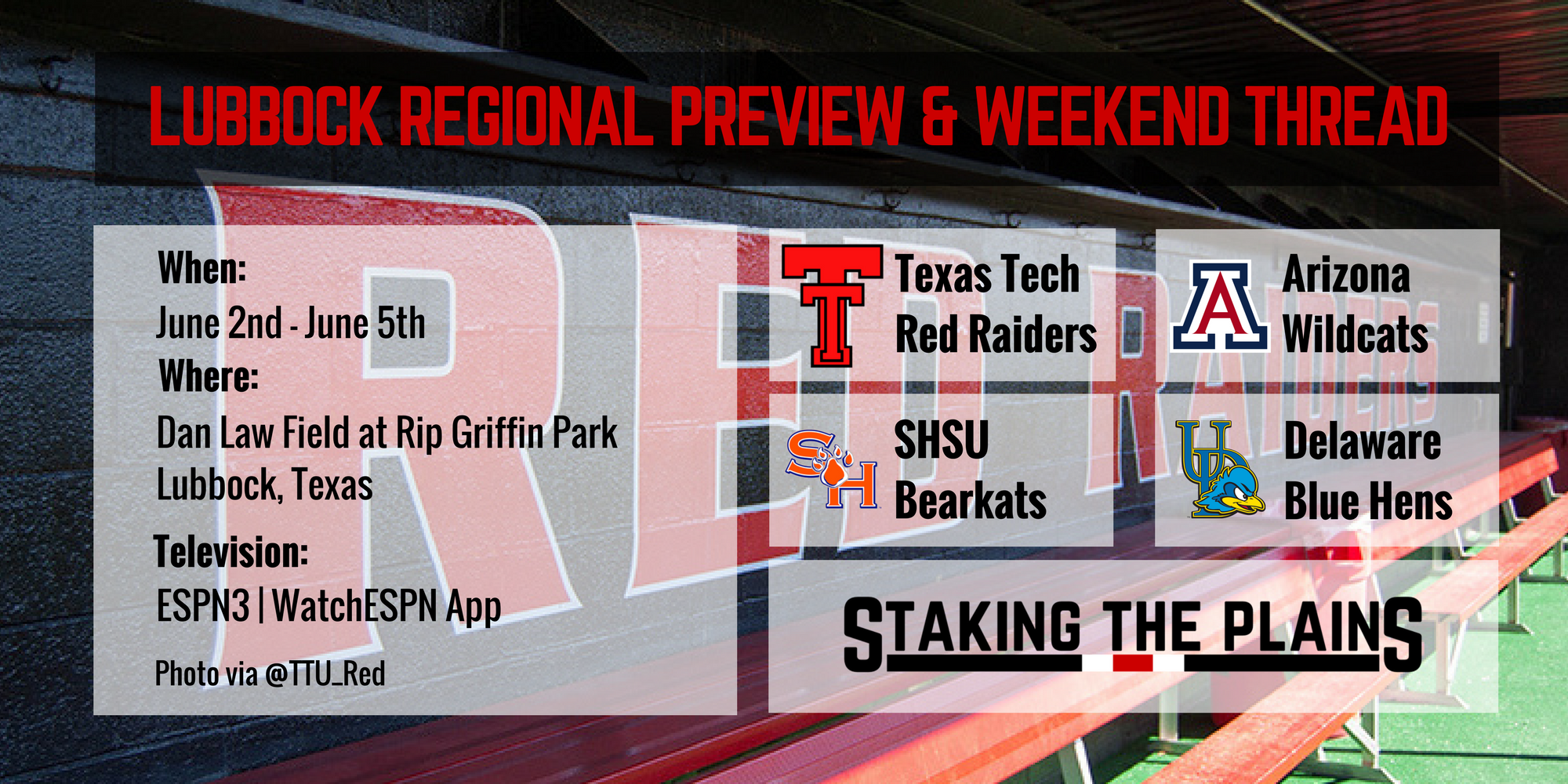 Your preview and weekend thread to the Lubbock Regional.

Here we go. Delaware is a very good offensive team, but they struggle a bit from the mound and that may prove to be the difference here. Davis Martin is getting the start on Friday and Steven Gingery will get the start on Saturday with the thought that Gingery will get the nod in a game that Texas Tech is on to the winner’s bracket / fingers crossed/. The key will be making sure that Martin gets on track early and I think we all know that Tadlock has no problem with a quick trigger. Coming off of the injury, you just don’t know how long he can go and if he can get through Delaware’s lineup.

Texas Tech’s hitters are no slouches, they’re an offensive team that hits for power and knocks in runs. There’s no question about that. Without Michael Davis, the offense doesn’t look as good, but it’s really deep and the fact that Gardner can step in and play second base after playing outfield all year says something about the depth of this team. The bats were relatively quiet in the Big 12 Tournament and let’s hope that they all figured some stuff out on the break. It’s go time.

Have we got you covered as far as news.

Baseball America’s Justin Perline previews the teams in the regional and here is Perline’s player to watch for Texas Tech:

Player to Watch: Davis Martin, rhp. The sophomore recently returned from a bout of tendinitis that kept him off the field since late March. He didn’t have his best stuff in his lone start back against Oklahoma State in the Big 12 Tournament, but pairing him with Steven Gingery atop the rotation makes for a formidable 1-2 punch. Martin, a Freshman All-American last season, went 3-2, 3.38 with 23 strikeouts and four walks in 32 innings this season.

For the Blue Hens, Perline says to watch outfielder Jordan Glover who is a hitting machine.

D1Baseball’s Frankie Piliere has superlatives for a handful of categories, says to watch SHSU Bryce Johnson, who has stolen 30, yes 30 bases, while hitting .350, and writes that they like Texas Tech’s chances this weekend:

No. 1 Seed Win Probability (1-10): 6. Texas Tech has the type of balanced roster that shouldn’t be tripped up if one or two things go wrong this weekend. The danger, however, is the Arizona bats catching fire. If they’re clicking they can be a very difficult team to beat and they do pose a legitimate threat to the Red Raiders chances here.

Delaware Online looks at the Blue Hen’s chances in facing Texas Tech and their hitters are confident:

“There’s really no true weak point in our order,” said shortstop Jeremy Ake, tops (.359) in a UD lineup with eight .300-plus hitters. “One through nine, we’re a solid lineup, and just keep moving guys over, getting guys in, trying to win the game.”

And their starter on Friday, Ron Marinaccio is ready as well:

“I just keep trying to tell myself, it’s just baseball, it’s just another game,” Marinaccio said after Delaware practiced in the stadium Thursday. “It is just baseball. That’s what our whole team’s kind of saying. We haven’t played in an atmosphere like this but we’re gonna control what we can and take care of what we can do.”

The Chron’s Jason McDaniel looks back at how Sam Houston State made the Lubbock Regional and they look towards playing Arizona again:

Sam Houston and Arizona met twice in last year’s Lafayette regional, with the Wildcats winning 7-3 and 6-5.

“Funny things happen in baseball,” Deggs said. “It’s crazy. What are the odds? There are X amount of teams, and we match up with a team that we have a lot of respect for.

“I have a ton of respect for their coaching staff and the way they play the game. So I guess it was meant to be, and we’ll see what happens.”

LAJ’s Nicholas Talbot has some numbers for Texas Tech this season to take a look at. And also from the LAJ is about how Tanner Gardner will now be even more vital to Texas Tech’s success with the dismissal of Michael Davis:

“He’s a very good athlete and does thing very well. He’ll come out and work hard,” said Texas Tech shortstop Orlando Garcia, who worked with Gardner up the middle. “It’s easy to work with a guy like Tanner. He’s been there before and done it. So, it wasn’t nothing new to me. So, I mean, people are probably surprised that he played second. But, I wasn’t. Tadlock does some things like that every now and then. And you have to respect it and trust it.”

RedRaiderSports’ Will McKay digs deep on a preview of all four teams and likes the Red Raiders to come out of this regional:

BIGGEST STRENGTH: No holes in the lineup. From 1 to 9, you can never relax as a pitcher or defense. Hitting is infectious with this team.

BIGGEST WEAKNESS: Bullpen walks. The relievers have improved as the year has gone on, but they still put too many free base runners on. Take a look at the action from the opening game of the 2017 NCAA Lubbock Regional. #WreckEm https://t.co/YCrn1flXHN pic.twitter.com/Nsjrg7YPn3

A rain delay stunted what was a wobbly start for Davis Martin, who was only able to throw 32 pitches in 1.1 innings before the rain came down. An hour or so later, freshman Caleb Kilian came on with 2 on and 1 out to finish the second inning and then went on to pitch an additional 3 innings, earning the win to go 6-0 on the year. John McMillon mowed down 3 batters in his 2 innings of work, with Jacob Patterson to work a clean 8th inning while striking out 2 and Parker Mushinski earned his 6th save of the year by pitching the 9th inning where he only allowed 1 hit.

The offense was started by a bases loaded Cody Farhat hit-by-pitch to score Hunter Hargrove and Brian Klien’s fielder choice scored Orlando Garcia. Farhat would hit a fielder’s choice to third to score Garcia in the 4th inning to go up 3-1 on the Blue Hens. Garcia then gave Texas Tech some insurance runs by hitting a 2-run home run in the 8th. Michael Berglund and Hunter Hargrove were the only two hitters to have multi-hit games, Hargrove going 2-4 with 2 runs scored and Berglund went 2-3.

Josh Jung had this play at 3rd base and he’s a freshman. That’s just stupid.

Remember that #SCTop10 worthy double play earlier? Here it is for your viewing pleasure. #WreckEmhttps://t.co/YCrn1flXHN pic.twitter.com/2WLrT9CRBv

Sam Houston St. Catcher Robbie Rojas went 2-3 with 3 RBI and a home run to help drive SHSU past Arizona. The Bearkats didn’t pitch their ace, Heath Donica, but instead went with Kyle Backhus who went 3.1 innings. The Bearkats ran through 6 pitchers on Friday night, none of them getting a heavy load other than Backhus and Riley Cooper, who earned the win despite allowing 3 runs.

After another lengthy rain delay, Arizona got past Delaware in 12 innings to earn their first win of the regional. Cameron Ming provided 7.2 innings and 4 hit and 3 runs before yielding to the bullpen. Alfonso Rivas hit his 8th home run of the year in the top of the 12th to put Arizona on top and that was all she wrote.

Filthy pitching and home runs. Steven Gingery was masterful in 6 innins, allowing just 2 hits, 2 walks and striking out 8 in just 85 pitches (that’s crazy efficient and he threw 52 of those 85 for strikes). Jose Quezada pitched the next 2 frames allowing just 1 hit and striking out 5 and Dylan Dusek pitched the final frame allowing just a hit. Tanner Gardner hit two home runs, 6 for the year, and Ryan Long hit a solo shot, also 6 for the year, to lead the way offensively. Gardner was 3-5 with 4 RBI and 2 runs scored and Long was 2-4 with an RBI and 2 runs scored. Michael Berglund doubled to score Long, but was thrown out at 3rd in trying to stretch that double into a bit more.

One note, centerfielder Cody Farhat had black tape on his hand and obviously didn’t play as Gardner played center and Brian Klien played at second. No word on what the injury is, but Tadlock said that Farhat was sore from his injury from last week. Texas Tech plays the winner of SHSU and Arizona and if Texas Tech loses that game, they’ll play again on Monday.

SHSU drilled Arizona to advance and knock out the Wildcats behind C Robie Rojas who went 3-4 with an RBI and SS Andrew Fregia, who went 2-4 with 3 RBI. Hayden Wesneski came in and pitched 6 innings of terrific ball, allowing 7 hits, but just 1 run.

Texas Tech missed a ton of scoring opportunities, with the meat of their lineup at bat, it seemed that Texas Tech just wasn’t able to capitalize, leaving 10 men on base, but that didn’t seem like enough and could have been more.

The full and always updated Lubbock Regional bracket is found on the NCAA site. Below is a screenshot before the madness begins.