How do the Oklahoma State Cowboys and the Texas Tech Red Raiders match up?

All stats provided by Football Study Hall and CFBStats. 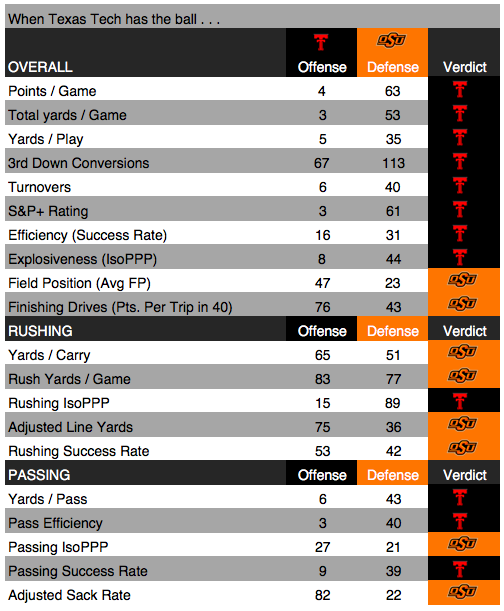 I’ve changed this up just a bit from last week and I think it flows a bit better in terms of visualization. Texas Tech is still really good offensively, particularly passing the ball, while the Cowboys have the advantage at stopping the run. I wonder how true that really is because of what happened to Oklahoma State last week against TCU. The rushing offense is good for Texas Tech and notice that Texas Tech is really good at those big plays (IsoPPP).

And Oklahoma State seemingly has advantages in the defense in stopping those newfangled passing plays, which they certainly did against Tulsa, while Pitt isn’t exactly a terrific passing offense.  I think the safeties are really good for Oklahoma State in the passing game, but I’m not sold on the cornerbacks.

When Oklahoma State Has The Ball 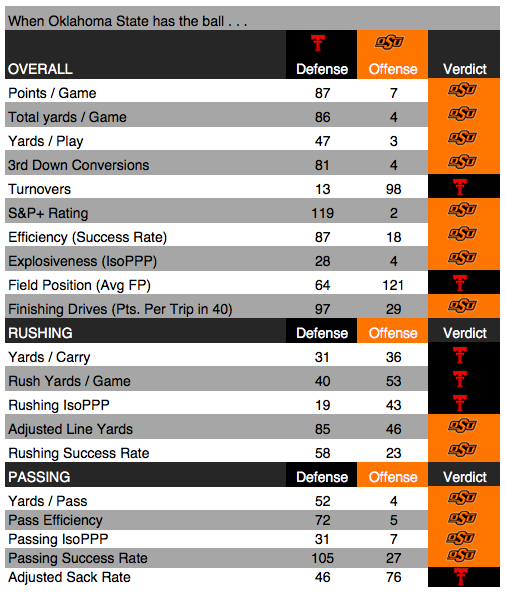 Oklahoma State has been lights out on offense and don’t let all of that orange bother you all that much. Texas Tech is much better than they have been in year’s past at this point of the year, yeah, with just 3 games under their belt.  The best numbers are in how Texas Tech stops the run. I’m still surprised at the S&P+ Rating at this point of the season and I think that’s all of the year’s past still running out of the numbers.