We preview Texas Tech traveling to Morgantown to take on the West Virginia Mountaineers. 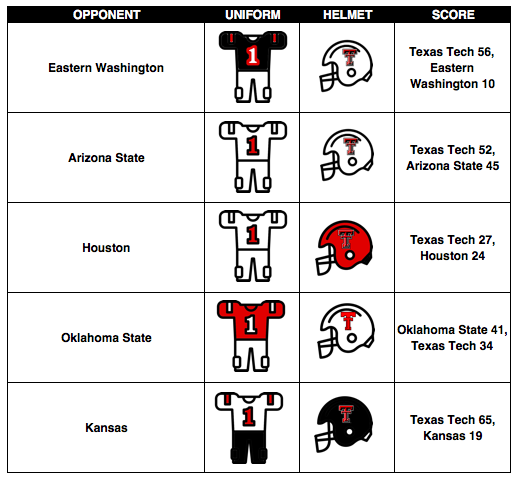 This has been fun. It’s not so much that the expectations have been so out of whack that there should be no expectation that this team is where they’re at in terms of record. If anything, this team is one win above lots of folks’ expectations, maybe even two wins above expectations. I think a lot of folks had Texas Tech pegged with a loss to Arizona State and an absolute loss to Houston in Houston, but Texas Tech ended up winning both of those games.

I wonder how many of those folks that had Texas Tech pegged with one of those two losses, or even both losses, are giving Texas Tech any credit for getting wins in both of those games. The idea of course is that I’d tend to think that those folks don’t give credit to Texas Tech to winning those games because they were too close, or closer than they should have been, or that the offense or the defense faltered late so they don’t get any credit really at all.

I’ve always thought that those sorts of folks really don’t give credit for much in life and I find that interesting. They’ll be the first to stand up when Texas Tech does lose and let everyone know that they saw it coming from a mile away. That’s easy because this team is just one season removed from winning 5 games and this team isn’t some sort of team that’s likely going to win 9 games so the expectations just shouldn’t be that high.

Either way, I hope you’ve enjoyed the journey thus far because it’s been a fun ride, the Oklahoma State loss excluded. It’s not going to be easy the rest of the way out, hosting Iowa State at home next week, then at Oklahoma, hosting Kansas State, then Baylor in Arlington, hosting tCU and then at Texas for Thanksgiving.

Against TCU, Grief appears to try to squeeze the ball a bit, trying to fit the ball into windows where it may be tight or into lots of coverage.

Let those WVU receivers get one-on-one and it could be church. Sills is absolutely great at scoring touchdowns and if Texas Tech blitzes then they had better be very sure they are getting to Grier. And Grier doesn’t get sacked much, if at all.

West Virginia is really good at running over the middle and that means that Broderick Washington and Mych Thomas will need to hold the line.

I also wonder about whether or not Sills is so good that he’s making Grier look like an absolute stud. They’re both good players, but I think Sills is just special.

WVU may be susceptible to the deep pass, which is true of most college cornerbacks. It’s really difficult to cover receivers 30 yards down the field if you have a quarterback that can air it out.

Again, deep passes are a problem for the West Virginia defense. Lots of holes in that defensive backfield.

Oh, and Grier again tries to force the situation, maybe he’s got a bit of “superman” in him in that he thinks that he’s faster than a speeding train, able to leap tall buildings in a single bound, etc. He’s very confident in his abilities and he can make a ton of throws, so maybe it’s about disguising that coverage.

On the team’s body language following the loss at TCU:

Good. I think we have good leadership with some older guys. It means a lot to them, and they have been around here for a while. We came in, and I stood right here in front of the group on Sunday and gave them my two cents. They were attentive. We watched video. We went down stairs and lifted weights. We went outside, and we were bouncing around pretty good. They are excited about playing football. That’s all you can ask for. The effort has been good. I thought we prepared for that game as hard as any group I’ve been around with the way we practiced and the way the meetings went, especially later in the week on Friday. You could tell with the way the meetings went, how we traveled and how they acted at the hotel. I can kind of sense disinterest sometimes, and it was nothing but locked in and ready to go. I couldn’t be happier with the way they prepared, and I couldn’t be happier with the effort that they played with. It can get discouraging when that happens – when you don’t get a few breaks and don’t win a game that you had a chance to win. TCU played pretty good too, and they are a good team. They are a top-five team right now, but we had an opportunity to win. We need to make a few corrections and improve in specific areas. It felt the same way at Virginia Tech. I said the same thing after Virginia Tech. If we get in that situation again, let’s get to a point where we can win that game. We didn’t unfortunately, which means that we need to continue to practice and continue to improve. We are probably going to be in that situation again here moving forward this year. When we are, hopefully, we can finish it. I like where they are at. We have a great group of kids that like to play and continue to work hard. They compete hard, and as a head guy, that is all you can ask for.

On the success he has had defending Texas Tech’s offense in the past and how much of that comes from his understanding of the offense:

I can’t take any credit for it. If I did, then I can say that about 80 percent of the offenses out there in the Big 12. Everyone runs some sort of version of how it all originated. (Associate head coach/defensive coordinator/linebackers) Tony (Gibson) has done a great job defending these guys, whether it’s our scheme or (associate head coach/defensive coordinator/linebackers) Tony (Gibson) having a bead of what’s going on or our players matching up well with them. I think it’s a combination of all of it. We didn’t do very well four years ago when they were here. They kind of got the best of us there with Davis Webb and that tight end (Jace Amaro) who we couldn’t cover, but we competed hard against them since. Now of that is going to carry over. I can assure you that. We have to look at what they do now. They have done some things different. They are doing some things different. They are in a much better frame of mind. We need to be ready to roll.

On if the team has talked about finishing drives better:

Well, we have been. Have we not? We have been getting down there and scoring touchdowns. We just didn’t happen to do it in that game. I’ll go ahead and address it. They did a great job of pinning us inside the five. There’s nothing you can do as a coach. If that guy makes that kick then I don’t know what you want me to do about it. You want me to put a guy on the one and tell him to field the punt? Then I’m sure you guys will have a bunch of other critical comments toward it. Their punter did a great job. Our punter needs to do a great job when he has the opportunity to do that. The guy created four out of five long fields in the first half. When you play against a really good defense, and then you get backed up inside the five, it makes it that much harder. A couple of those drives in the first half stalled out. The two times we got down there, we didn’t finish with touchdowns, but we have been doing that. I don’t know what you want me to change. I don’t want to change anything from what we have been doing. We need to finish drives better. Then the flipside of that, TCU got down there three times and scored twice. We got down there three times and scored one. In a close game, there’s a difference there. In that game, field position probably matters. Two turnovers matter, and how you finish drives matter. Those things were probably the difference between winning and losing. In close games, those things matter.

I think this is a close game, I’ve mentioned to Travis doing the weekly conversation that I think that this is a very close game that could go either way. I’ve predicted something like 38-36 and a win for West Virginia, but I really do think that it could flip either way.

Oh, and I forgot to get the predictions from the staff, so I’ll update it as we go along.