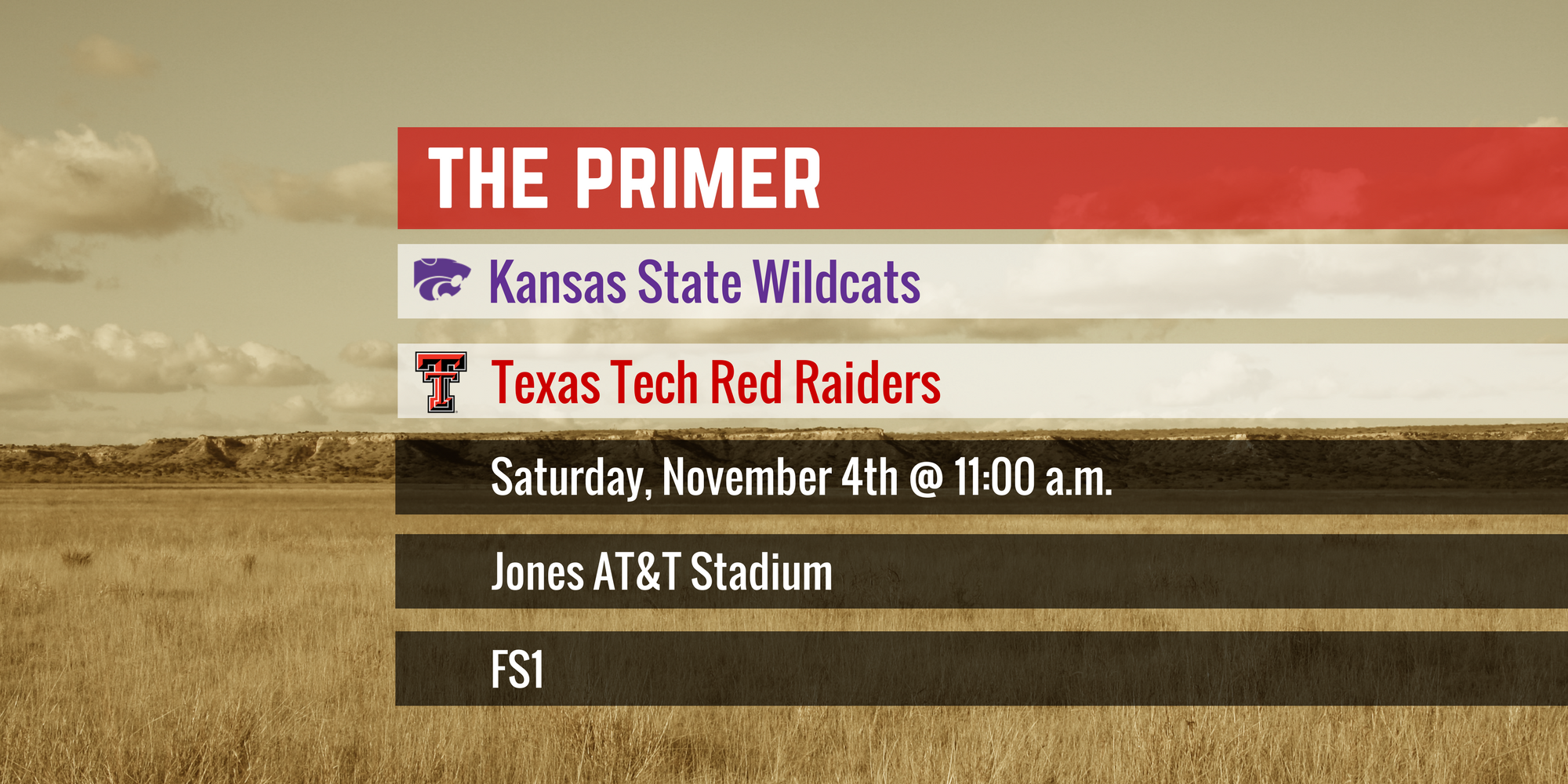 Kansas State got past Kansas, 30-20 in what seemed like a game that was a lot closer than it should have been. However, Kansas State was out to a 20-6 lead at the end of the third quarter and then allowed 2 touchdowns while only scoring 10 points themselves. There may have been some junk touchdowns in that score. K-State has one additional win over Texas Tech and that’s because they’ve played both Baylor and Kansas with conference losses to Texas, TCU adn Oklahoma.

As if you don’t already know why this game is so important for Texas Tech, this looks like thsi game is a battle for who is going to be in 7th or 8th place in the Big 12 the way that both of these two teams are headed. That’s probably something that neither team wants to hear, but I think that’s a pretty safe statement.

What to Know About Kansas State

This really depends on who Kansas State starts at quarterback. Jesse Ertz (6-3/212) started early, but was injured recently and hasn’t played much the past two weeks. He’s your typical K-State quarterback, kind of a hybrid guy that can run the ball very effectively but he can pass it pretty well too. That delayed quarterback keeper is one of the more beautiful and frustrating plays that I can think of as it is infuriating if you’re on the defensive side of things, meanwhile, the quarterback just picks and chooses their spots as the offensive line blocks. The other option at quarterback is sophomore Alex Delton (6-0/200) and he’s much better at running the ball than he is passing the ball. He’s young and inexperienced, but he does have wheels as he’s already the team’s second leading rusher. And freshman Skylar Thompson played against Kansas as well, maybe splitting time with Delton.

Sophomore Alex Barnes is the main running back while Justin Simon (5-10/195) and Dalvin Warmack (5-8/187) receive some spot carries. Winston Dimel (6-1/235) is a terrific fullback and the son of the offensive coordinator, Dana Dimel.

You all probably remember Carlos Strickland, originally committed to Texas Tech, the ended up at Cal for a year before transferring to K-State, where he has 1 catch for 11 yards. He’s just a sophomore, but he seems to be behind a lot of folks. Zuber is the leading receiver by a wide margin, with Byron Pringle (6-2/205) and Dalton Schoen (6-1/205) coming in as the #2 and #3 guys. Pringle is the deep threat of the bunch. Those are the three main receiving threats. There is a tight end on the roster, Dayton Valentine (6-4/270) and I’m not sure how much he plays, but he’s essentially an extra offensive lineman.

Defensively, the defensive backs are pretty good, while the line and linebackers are pretty marginal. What ended up to be a boon for Kansas State last year, the incredible defensive line, has been just sorta so-so this year. Gear leads the defensive line with Tanner Wood (6-5/260) and Reggie Walker (6-2/242) at defensive end. They don’t make a ton of plays on the end, Geary is the biggest threat, while Trey Dishon is most likely your noseguard (6-3/311).

The linebackers lead the team in tackles, Tanking is one and Jayd Kirby (6-2/222) is the other. Both are pretty fantastic at getting to the line of scrimmage and stopping the run and don’t let a lot of big plays get through. The defensive backs are all up there in terms of tackles and plash plays. Denzel Goolsby (5-11/192) and Kendall Adams (6-1/221) are most likely your safeties, Adams appears to be the better of the two, although Adams may just play up more than Goolsby and isn’t in coverage as much. D.J. Reed (5-9/188) and Duke Shelley (5-9/178) are your dimunuiative cornerbacks, I think Reed is the better of the two and you’d think that Texas Tech would have a nice advantage over these guys.

Via OddsShark, Texas Tech opened as a 1 point favorite at 4:51 and that line moved to Texas Tech -4 by 6:29. I was sorta surprise that Texas Tech was just favored by 1 to begin with, but it only took an hour and a half for that to get corrected.