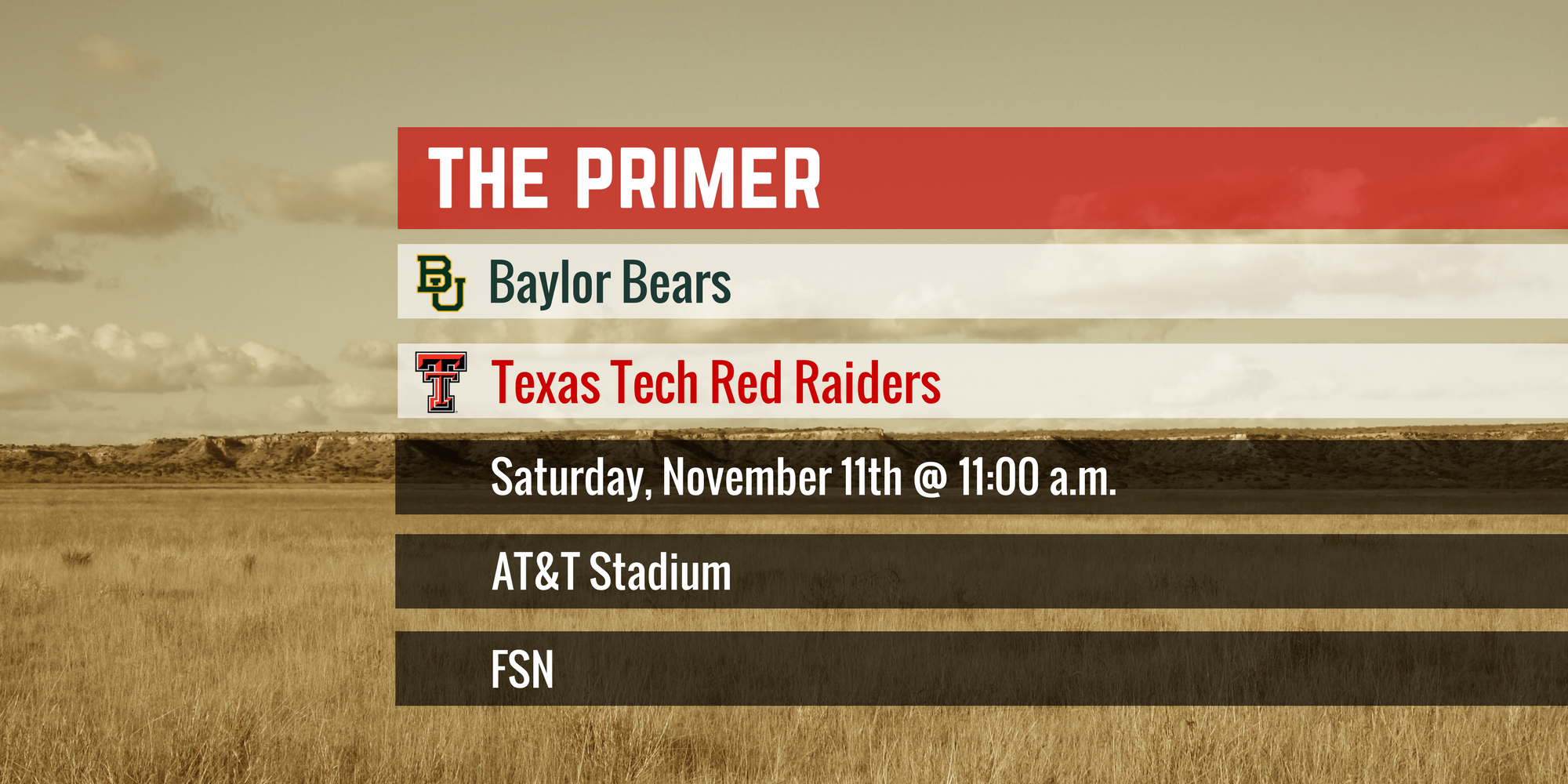 An early week’s look at the Baylor Bears.

Baylor notched their first win of the year over Kansas, starting Brewer (see below) and pretty much running the Jayhawks out of their own stadium. Baylor is on a longer winning streak than Texas Tech at this point. Baylor has obviously had their issues in regards to winning games this year, losing games to Liberty, UTSA and Duke in the non-conference portion, while Iowa State and @ TCU remain on the Bears’ schedule.

I don’t think we need to talk about what happened with Texas Tech last week. If you don’t know, don’t ask.

Well, it’s absolutely vital for Texas Tech to throttle Baylor. That’s probably an overstatement, but Texas Tech needs one of those sort of wins, but I’m pretty sure that Baylor isn’t going to let that happen. Baylor has played Oklahoma and West Virginia very close, both games at home. they’ve struggled a bit more on the road, losing by 13 to Kansas State and getting blown out at Oklahoma State while losing by 31 to Texas.

For Baylor, this would be their best win of the year if they can pull off the upset and it would be a pretty significant upset.

What to Know About Baylor

The Baylor offense is now being put in the hands of true freshman Charlie Brewer (6-1/190). That name should sound familiar as he is the younger brother of Michael Brewer, former Red Raider and Hookie. The younger brewer pretty much had all the snaps against Kansas and he completed 67% of his passes for 646 yards, 25 touchdowns and 1 interception. He also ran for a few yards, enough to be dangerous. Brewer is the future of Baylor football and he’s just a true freshman.

The running attack is led by John Lovett (6-2/195), 84 rushes for 405 yards and 5 touchdowns before the Kansas game, but Terence Williams (6-2/222) is back and I’d guess that he’ll carry the biggest part of the load. JaMycal Hasty (5-8/200) is your change of pace back and he gets a few carries. He’s a dangerous threat, but that really hasn’t proven out this year. That’s largely due to the fact that Baylor has a duct tape offensive line that’s had to deal with a ton of injuries and problems through the year. That line is beat up for sure.

Denzel Mims (6-3/197) is the leading receiver and he’s an excellent deep threat, averaging near 29 yards per catch. He’s incredibly inconsitent, only catching around 48% of his passes, but when he gets it he’s gone as he’s already scored 7 touchdowns. Tony Nicholson (5-10/185) is more of a possession receiver, averaging less than 10 yards a catch and no touchdowns, while Pooh Stricklin (6-2/185) and Chris Platt (5-11/173) round out the top four receivers, Platt is another speed guy, averaging 25 yards a catch or so and 5 touchdowns, while Stricklin is a bit of both.

The defense is led by their linebackers, Clay Johnston (6-1/220) and Taylor Young (5-9/225). Johnston makes plenty of plays behind the line of scrimmage and Young does as well. Jalen Pitre (6-1/200) is the other linebacker of note. The defensive line is led by Ira Lewis (6-3/290) and Bravvion Roy (6-1/320) so it’s clear that Baylor has some really good size up front. Lewis is a good playmaker and probably one to watch as he’ll create some havoc up front. Brian Nance (6-3/250) and Tyrone Hunt (6-4/285) are the Baylor defensive ends and they don’t put a ton of pressure on quarterbacks, but they do have some size up front for sure.

The secondary is led by Harrison Hand (6-0/190) and Verkedric Vaughns (5-9/190) at the cornerback spots and Davion Hall (6-1/210) is the leader at the safety spot. The secondary is probably the weakest part of the Baylor defense. They struggle to make plays there.

Via OddsShark, the line opened with Texas Tech favored by 7 and that line has moved to 7.5 as the evening progressed. That’s probably about right and considering the battered confidence of this Texas Tech team and maybe surging confidence of Baylor, this just may be where things are at.