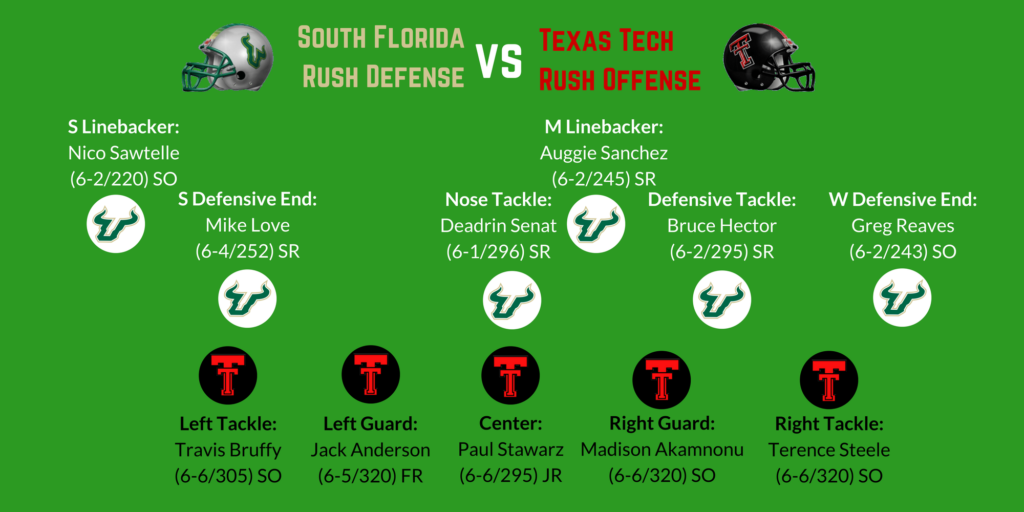 It really has been a three-headed monster for the better part of the season. Texas Tech really hasn’t been able to rely on “a” running back for the entire season. Whether it has been Stockton’s injury, or King getting caught up to speed and Nisby learning the playbook. It’s been one thing after another.

Perhaps the most consistent and best thing has been the offensive line. What was probably a liability at the beginning of the year isn’t necessarily a strength, but there is probably at the very least an acknowledgment of what they are. The developmet of the offensive line and the fact that these guys have been able to play all year together.

I get so caught up in the other aspects of the offense that I tend to not focus on the offensive line. I don’t think there is a dominant offensive lineman in the group. That’s not necessarily a bad thing, but there are not guys there that are just absolutely moving opposing defenders around. I think offensive line coach Brandon Jones knew that, so he employed a ton of zone blocking and he likes to pull the guards when he can, especially Jack Anderson. Bruffy is a capable tackle, although speed rushes are not his thing. I don’t remember thinking one thing about the right side of the offensive line pretty much all year. Steele and Akamnonu have been good. And although Stawarz has made a few more penalties that you’d like, these are minor complaints

This is a really stout run stuffing group. the defensive lien and linebackers create a ton of splash plays and I’m ridiculously impressed by what Senat does at the tackle position. South Florida has a really good rush defense, top quarter in the nation. This is a really great group and it’s a really senior group. That’s what’s made them so good I think. Seniors pretty much all across the board and they’re talented.

The two tackles, Senat and Hector help lead the group, especially Senat. Hector is very good too, 29 tackles, 13 tackles for a loss and 13 run stuffs. Combine that with Senat and that’s a dominant. Then add Mike Love at defensive end, which is 22 tackles, including 11 tackles for a loss and 10 run stuffs and Reaves, who plays a hybrid spot like Kolin Hill, you’ve got guys stopping players all over the spot

The main linebackers, Sanchez and Sawtelle are good, but it is Sanchez that’s the star. Sawtelle is the least impressive of the entire bunch, but in comparison to the rest of the group, who cares.