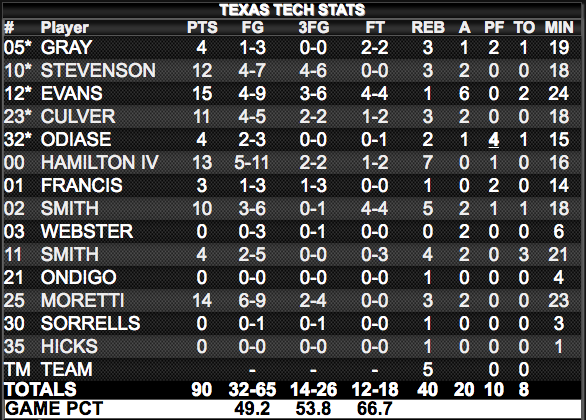 Player of the Game: Gosh, hard to pick just one guy. There were five guys in double figures. I’ll go with Tommy Hamilton, who had 13 points to go along with 7 rebounds and looked good in the post even though he was going against a big Florida Atlantic frontcourt. We really need that sort of performance from Hamilton in the Big 12.

High Flyer of the Game: This is pretty much going to be either the Smith’s or Culver for every game, I’ll go with Zhaire Smith, who just elevates so much when he attacks the basket.

Defender of the Game: We’ll go with Jarrett Culver, who had 4 steals and was ridiculously aggressive on defense and just pressured FAU offensive players enough to just take the ball from them a couple of times and then Culver went out and got a couple of blocks as well.

Multi-Purpose Player of the Game: Zhaire Smith scored 10 points on 3 of 6 from the field, made all of his free throws, grabbed 5 rebounds, had 2 assists, just 1 turnover, 1 block and 3 steals.