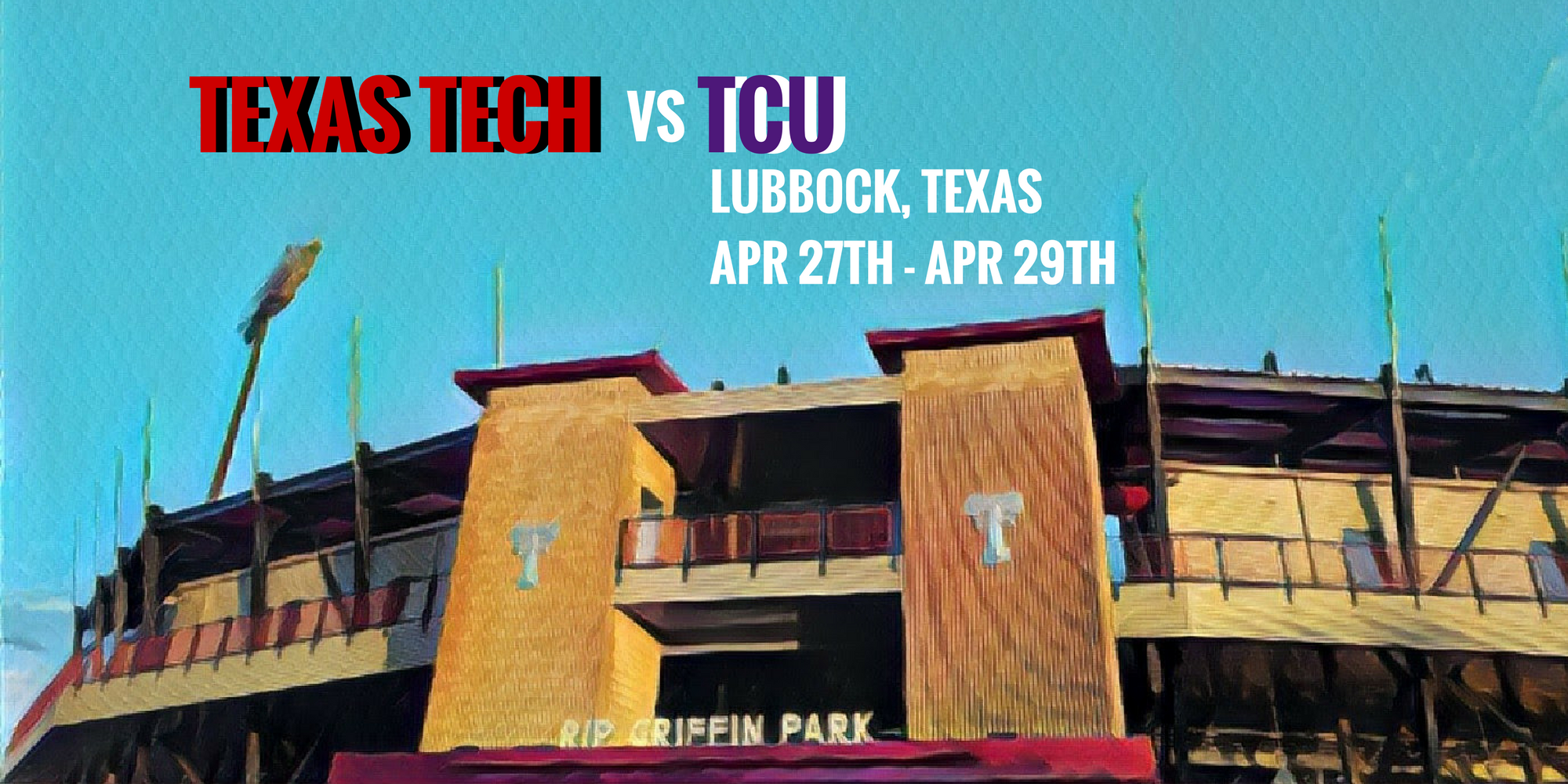 The Red Raiders travel to Houston to take on the Horned Frogs.

It seems that the Red Raiders have been at home for an inordinate amount of time, save and except the mid-week game that’s happened. Home series against Kansas State and Oklahoma have seemingly cured some of the issues that this team had. Of course, the issues that this team has had are minor in comparison of the grand scheme of things are pretty small. This team has still only lost 10 games for the entire year, have lost two starting pitchers, but have been incredibly good offensively and pretty good from a pitching perspective. The biggest issue with this team, which is the same issue with every collegiate team, is that winning on the road is difficult. The Red Raiders are 10-8 on the road and an incredible 21-2 at home. Texas Tech can change that narrative this weekend.

Star-Telegram’s Stefan Stevenson: TCU can get up off the mat against Texas Tech this weekend in nationally-televised series

“We haven’t had the season we wanted to have but even still this weekend was one people marked on their calendar,” Schlossnagle said. “A weekend like this is why you come to play at TCU. They’re certainly really, really talented and are playing really well. But, as we like to say, it’s never about the best team, it’s about the team that plays the best. We’re going to count on that this weekend.”

TCU is 75th in the latest RPI (ratings percentage index) rankings, which quantify a team’s record and its strength of schedule. RPI is a major factor in deciding which teams earn at-large NCAA tournament berths and how they are seeded.

A strong showing over the next three weeks, beginning against the Red Raiders, could greatly improve the Frogs’ RPI ranking. Texas Tech ranks third in the RPI. Texas (29-15, 11-4) is No. 30 and West Virginia is No. 36. Winning against these teams would boost TCU’s ranking and perhaps take some pressure off in the Big 12 tournament May 23-27. With a rough showing in the final 15 games, the Frogs will be forced to win the conference tournament to keep their postseason streak alive.

Eh, I don’t know if you an put this on Tadlock, he’d probably tell you that he’d take the blame, but Davis Martin had somewhat struggled through his first four innings. He only gave up 3 runs, but he loaded the bases a few times and got out of those issues relatively unscathed. In fact, he only gave up 3 runs, but with a 4-3 lead, Tadlock let Martin start the 5th inning and with one on, Martin allowed Balta to homer to right field, giving TCU the lead, that they wouldn’t give up. Of course, the offense shares some blame here too as they only managed 5 hits all game long, no one batter had a multi hit-game. Gabe Holt was 1-3 with an RBI, Josh Jung was 1-3 with an RBI, Grant Little was 1-2 with an RBI and Cam Warren was 1-4 with an RBI. That’s basically the guys that got hits. Backs are a little against the wall right now.

Well, Caleb Kilian (W, 7-1)and Ryan Shetter were absolutely fantastic, Kilian allowed just 1 hit in 6 innings, throwing 101 pitches, walking 2 and striking out 9, while Shetter (S, 3) earned his third save of the year finishing the game, walking 2 and striking out 4. That’s a one-hit shutout folks, the first since 2012, and when Kilian throws his off-speed stuff it’s just nasty.

Take a look back at some of the highlights from tonight’s 6-0 shutout of TCU. #WreckEm pic.twitter.com/AdEbongAQ8

14 walks. That’s how many the Texas Tech pitching staff issued yesterday. I don’t know how many runs were actually walked in, but it was probably too many. John McMillon only lasted 1.2 innings before being pulled after giving up 4 runs, walking 3 and striking out 2. Jose Quezada went 1.1 innings and gave up 2 runs with 2 walks. Dylan Dusek pitched 2 inning giving up a run and 4 walks. Ty Harpenau pitched an inning without incident (he did give up a walk, but no runs) and then Kurt Wilson pitched the 7th inning, giving up 2 runs, and walking 4. Just ugh. The offense wasn’t really any better, only mustering 5 hits, but they did score 5 runs, including 4 in the 1st inning.