The Texas Tech offense is the best offense of the field by far, on base and slugging percentage and just plain old average. That’s the good news. The bad news is that all three other teams are better pitching staffs, Florida has the best, albeit not by much. And the thing that I’m trying to figure out is how Texas has managed to get where they are with the less than stellar hitting team and the pitching staff not being all that great. The inability to miss bats and the relatively high walk rate is odd. And Texas Tech doesn’t have any room to talk, but you can point to the offense and think, yeah, I get why Texas Tech is here, they just hit the hell out of the ball. Florida and Arkansas are very good teams and since I haven’t watched much, if any, games from those two teams I don’t have much an opinion about either of them other than I think this is a pretty evenly matched bracket and very good bracket, while the other bracket doesn’t seem all that great.

Depending on what happens for Texas Tech on Sunday, they’ll take a day off on Monday, and then play on Tuesday for sure, with this bracket being a double-elimination bracket. And if you’re not keeping up with the other bracket (Mississippi State, Washington, North Carolina and Oregon State), please make sure and read D1Baseball’s Aaron Fitt bracket breakdown. And Mississippi State defeated Washington last night, 1-0, and North Carolina upset Oregon State yesterday, 8-6. 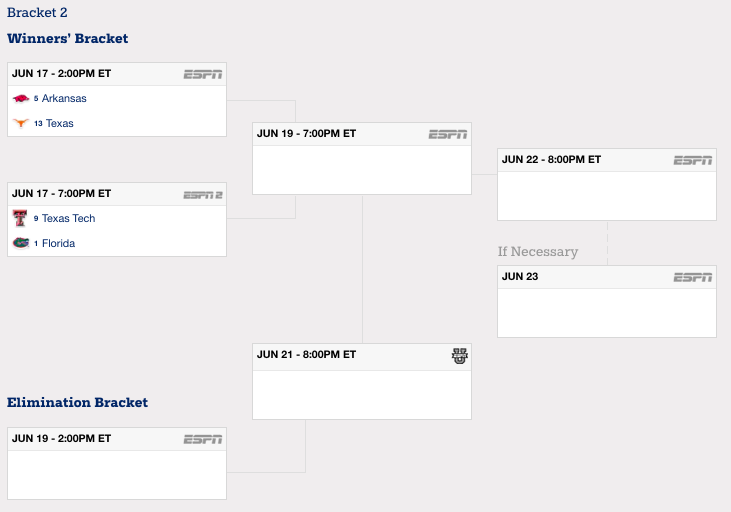 NCAA’s Andrew Cyr: One fact you may not know about each of the 2018 College World Series teams

NCAA: Texas Tech’s Josh Jung isn’t telling anyone what he says to his bat