On Friday, I asked whether or not you all check out the Staking the Plains Facebook page, and I received some excellent responses from folks that there probably is a certain group of folks that do still check Staking The Plains from Facebook, although it seems as if Facebook has lost its luster with a lot of you. One of you asked how you can help me with promoting Staking The Plains, and these are my suggestions.

1. If you know of Red Raiders that want an option that they don’t have to pay for, then text your friends and let them know that STP is an option for them. We don’t break news, but we certainly have a really robust discussion on a handful of topics, sometimes led by you all. We’re not the only place and I’m totally good with that, but I love what we’ve done here. 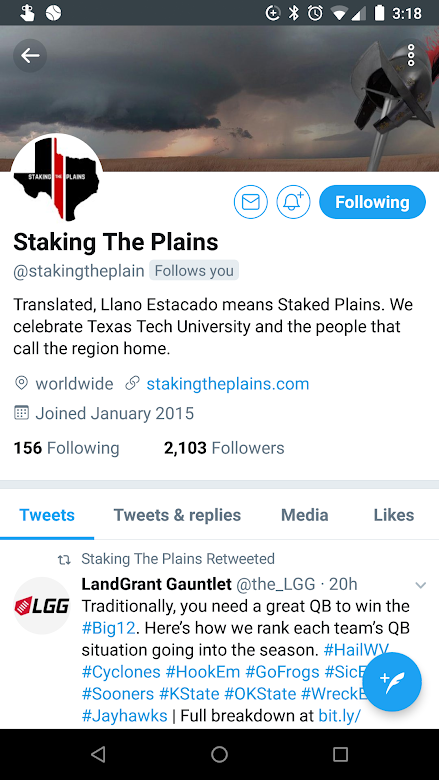 Prepare to be serenaded by the acoustic stylings of freshman Audrey Smith, a setter/defensive specialist from Mission, Texas!#WreckEm 🔴🏐⚫ pic.twitter.com/vWyf0dUilj

We are so thankful for our fans. We can’t wait to see you this season!
🎟: https://t.co/YOtkQ2j6Nm pic.twitter.com/jrkM6k81kZ

“I love it. My teammates are great guys and I love our process. I’m gonna score the ball, but I’m gonna make my teammates better as well.” – Get to know one of our newest Red Raiders, Matt Mooney! #4To1

Practice starts this week, so rather than just content, like the videos below, we should actually start to see some news.

We know offense.
Next man up.#WRU

Houston. I’ll be there with Dan and Brian.

Via the Chargers official site, Dylan Cantrell is making a moves at training camp:

After minicamp ended, Wide Receivers Coach Phil McGeoghan mentioned Cantrell had the most reps of any receiver during the spring. According to Chargers Head Coach Anthony Lynn, that work the wideout put in during OTAs is showing right now.

“Out of all the receivers, he probably improved the most this offseason,” Lynn said. “He started out slow but got better each and every day. That’s kind of how this camp is going so far. Yesterday, he started out a little slow. Today, he looked a little better.”