The Cougs and their stats.

I don’t think we’ll get full profiles for another week (maybe) so with that being said, we do have Bill Connelly’s S&P+ rankings and they’ve got Texas Tech at 50th overall, which is up 38 spots from last week, while Houston is 37th overall. Also from Connelly are win projection changes after 2 weeks, and in the Big 12, Kansas State and Iowa State have dropped -1.7 games from their projected wins, giving them 3.8 wins for Kansas state and 3.2 wins for Iowa State, whie your Red Raiders are predicted to finish with 5.5 wins, which is good for 6th in the conference and slightly ahead of Baylor who is to finish with 5.3 total wins.

UPDATE: Well, this really isn’t an update, but I didn’t see the stat profiles until this morning after I got to work, so here they are. I’ll have everything ready next week, just in time for conference play.

College Football Analytics: The Cougars are 36th overall and Texas Tech is 56th, but predict that there’s a 52.2% chance that Texas Tech wins this game.

FEI College Football Ratings: The FEI ratings have Texas Tech at 58th and Houston at 45th.

ESPN’s Football Power Index: They’ve got the Red Raiders at 31st overall and Houston at 54th. That seems like it should be reversed as Houston has the better resume thus far and they have dropped a game, but I’m not in charge of that. 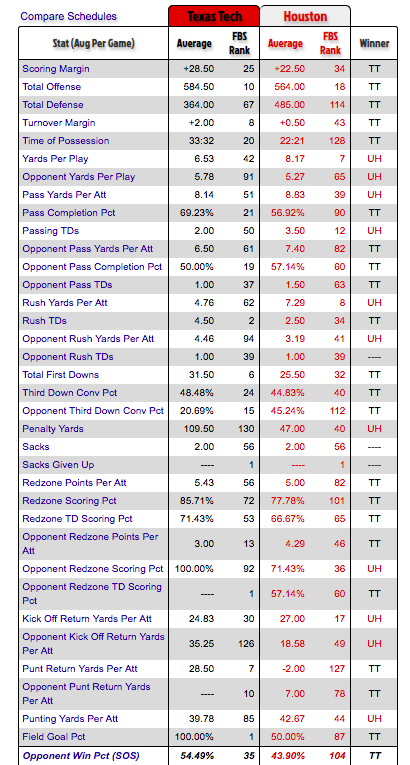