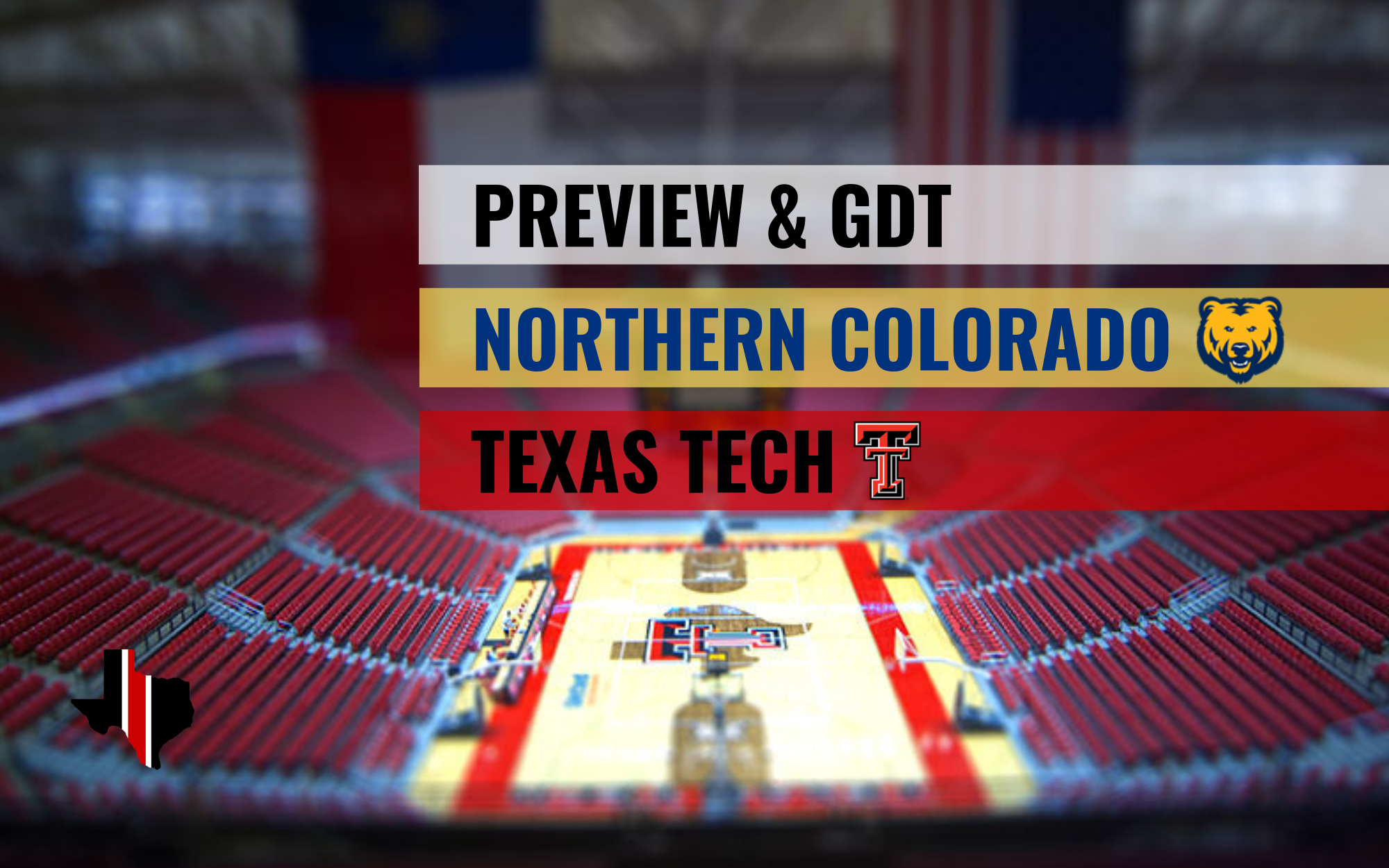 A second set of Bears.

How to Watch: FSSW | FOXSportsGo

1. Stats. Texas Tech made a pretty nice jump in the KenPom rankings. Both KenPom and T-Rank think that Texas Tech has an elite defense and holding USC and Nebraska to below their season averages will certainly help. Texas Tech seems to be very cohesive on defense and they seem to get concepts that maybe other teams aren’t grasping until after the break. Northern Colorado is sorta the same on offense and defense, top half of the country, but not great by any metric.

2. Scouting. Radenbaugh, Harris and Davis are the teams’ best players with Harris doing his damage off the bench. Davis has a high usage rate and has the ball in his hands quite a bit, while Radenbaugh and Harris are just trying to score. All three players shoot very well from the three-point line, 55% for Davis, 71% for Harris and 50% for Radenbaugh. And even Masten off the bench shoots very well, 56% from beyond the three-point line. And watch out for Hume, he doesn’t shoot as well but he likes to throw up the three-point shot. Northern Colorado should definitely limit that and let those other guys fill it up, but that doesn’t appear to be what’s happening.

3. How They Match Up. A very guard-heavy team with the Bears and so we’ll probably see a similar lineup to what we saw against USC and Nebraska, a lot of Owens in the middle and lots of guards. Unless of course Beard wants to go heavy in the middle and since it is so early in the season, I’d be fine with seeing what continues to work and what doesn’t.

The Red Raiders will look to do both when they host a potent Northern Colorado at 4:30 p.m. Saturday in the second part of a doubleheader inside United Supermarkets Arena.

“It’s a game that we scheduled on purpose, knowing that this is a great opponent,” Bead said of the Bears, who won the CollegeInsiders.com Tournament and enjoyed a 26-12 campaign last season. “Think it will be an RPI game for us later. … We’re on edge around here because we think this is a team that can come in here and beat us if we’re not at our best.”

Texas Tech, winners of its last 41 non-conference home games, will face off against an offensive-minded Bears squad averaging 101.3 points per contest.

“This is possibly the best team that will come here in our non-conference schedule,” Texas Tech coach Chris Beard said. “This is a game that we scheduled on purpose knowing that it is a great opponent. I think it will be an RPI game later. It’s a team that won 26 games last season and a postseason tournament and have picked up right where they left off last year. We are going to have to play well. Our guys understand this. We are on edge right now because we know that this is a team that can beat us if we are not at our best.”