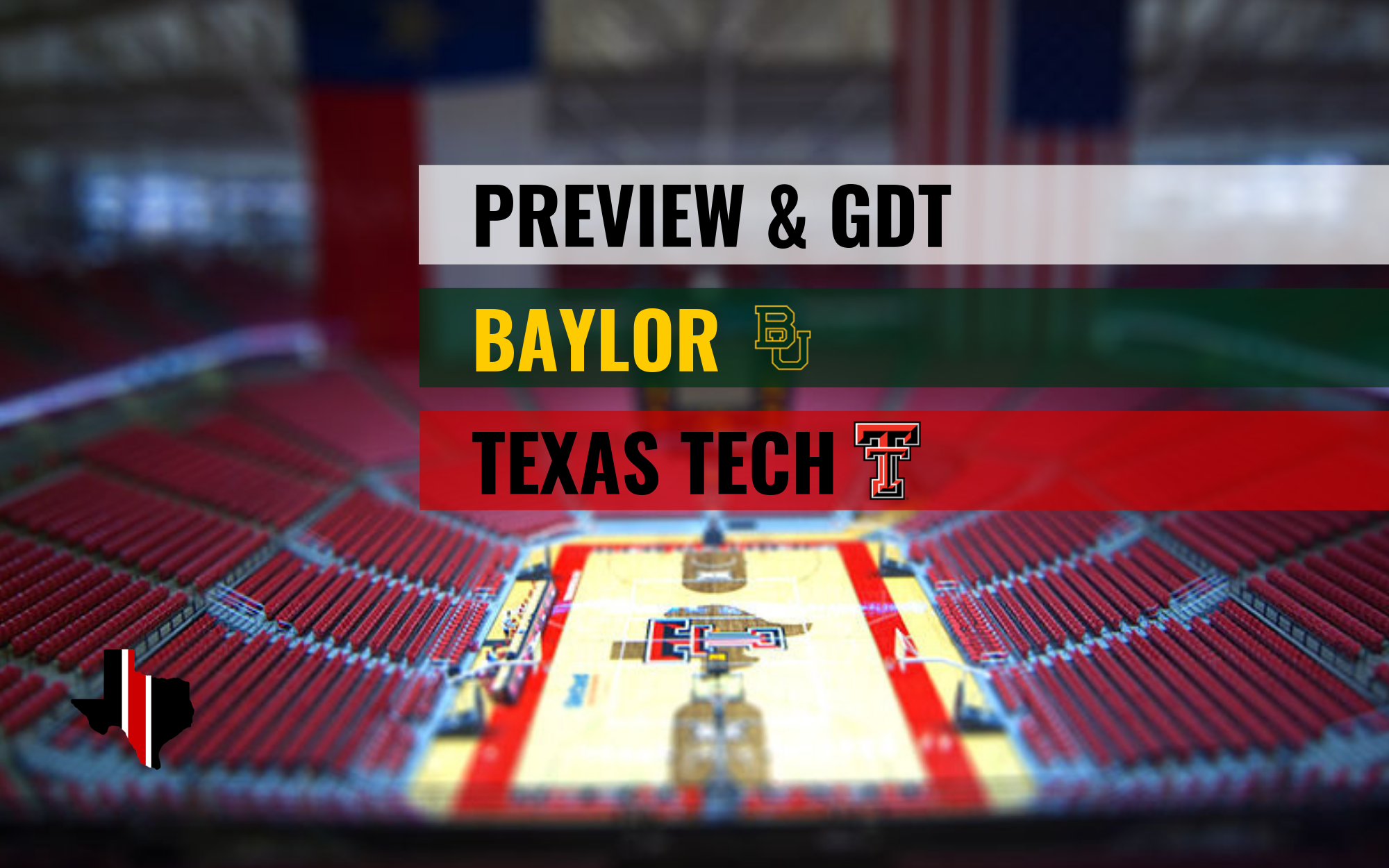 The Bears are in town.

1. Stats. Baylor got Texas Tech the first time around by hitting everything outside and the Bears are certainly capable of doing that. I mentioned the last time that on the games that Baylor had won on their streak, they were fantastic from the outside. Baylor’s best offensive trait is that they rebound the ball incredibly well on the offensive glass, crashing the heck out of it. The Baylor defense is what shines most of the time though, they limit opponents from shooting the ball very well and block shots very well.

2. Scouting. Mason has been really the driver for Baylor, but they can get contributions from a handful of folks. The last game, Bandoo, who comes off the bench was fantastic offensively and I don’t even remember him the last time (I’m sure he did, I just didn’t remember). Mason, Bandoo, and Gillespie are the best players. There’s a chance that King McClure will play, but he’s been out for the last few games. I’ve added him as the 10th man, but if he plays, he’s obviously more important than that, but I’m just not sure if he’ll go.

3. How They Match Up. When Baylor goes small, like Iowa State can do, then that’s a bad match-up for Texas Tech, running out a bunch of guards that defend the perimeter defensively and offensively shoot from the outside. I think it will be interesting to see how Texas Tech will counter because it is something that the Red Raiders will face. Baylor beat Oklahoma mid-week at home by 6, which is not a good omen, and prior to that, the Bears had lost to Texas on the road by 12 and lost to Kansas State at home by 7, both losses happened because Baylor wasn’t very good defensively. That means that your Red Raiders need to be great on offense and they did have the Oklahoma State game as a tune-up. A couple of interesting stats. Baylor is 1-4 against Texas Tech in their last 5 games against the spread and 6-3 straight-up against Texas Tech. One other weird stat, Baylor is 10-3-1 against the spread their last 14 games, while Texas Tech is 6-12-1 against the spread in their last 19 games.

Texas Tech will look to continue their winning ways when it faces off against Baylor at 1 p.m. Saturday at United Supermarkets Arena. The game is set to be broadcast on ESPN.

“I thought Baylor shot the ball really, really well in Waco,” Texas Tech coach Chris Beard said, alluding to a 73-62 loss to the Bears back on Jan. 19. “So, we’re going to have more urgency on their shooters. They played different defense against us, so we’ve got to be prepared for different things. … Simply stated, we always feel we have to play our best game of the year to play with Baylor.”

Gillespie was a NCAA Division III forward at the prestigious liberal arts school in Northfield, Minn. But as his eyes followed the TV screen that day two years ago, he began to believe he had the height and athleticism to play with the big boys at the highest level of college basketball.

“It was like an epiphany,” Gillespie said. “I can do what they do. I called my mom and said I want to make this thing happen. It was in the middle of my Division III season. She said ‘OK, just finish out this season and we’ll try to figure it out at the end.’”

Now Gillespie is one of those players that viewers see on national TV, playing in one of the toughest and most respected conferences in the country.

Back at home and on a three-game conference winning streak with a 23.7 scoring margin advantage in those wins, No. 15 Texas Tech will host Baylor at 1 p.m. on Saturday at the United Supermarkets Arena in the 13th round of the Big 12 Conference fight. The game is sponsored by Wells Fargo.